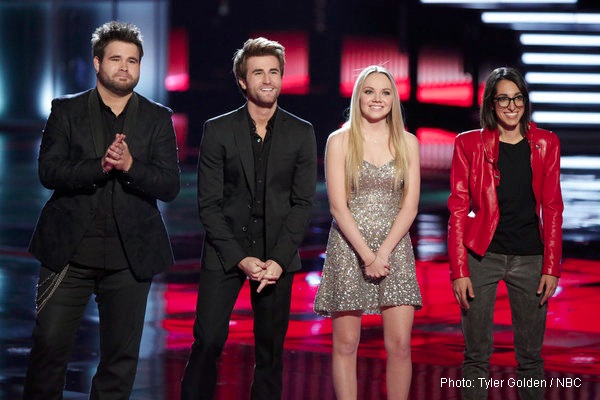 Three months ago, the journey began for the final three that are remaining in season four of “The Voice” competition. During the eve of the season four finale, the coaches looked back at their prodigies at where they started in the Blind Auditions, and selected their “defining moments” songs for encore performances.

At the start of the show, the coaches talked about what’s special about this season and the team members remaining. Adam said, “Season four is amazing!” Blake spoke of Danielle Bradbery, “Danielle with no doubt has the strongest vocals in the world.” Usher said about Michelle Chamuel, “Michelle represents the standard that changes everything.”

The two competing coaches with artists left in the game are Blake with The Swon Brothers and Danielle Bradbery, and Usher with Michelle Chamuel. Usher said, “This is my first time here, and Blake, I am not letting you take it.” Blake replied, “We’ll see.” 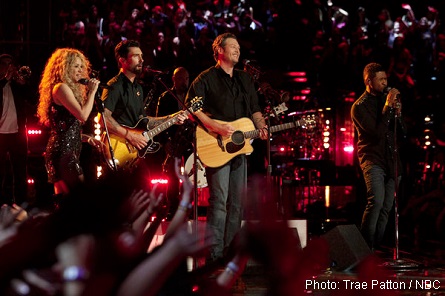 The first performance of the night came from the coaches who joined in together in singing “With a Little Help From My Friends” by Joe Cocker.

The coaches expectations for this last night of performances from the artists were to be the best and to have fun. Adam said, “I want to see the best from everyone. If they have fun, we have fun.” Shakira said that she will miss being on “The Voice”, and “I’m just going to enjoy the show tonight.” Usher said about Michelle, “We rarely take the time to just be. I hope tonight she comes out here and just be her best.”

Blake said about his remaining artists, “Hard work and doing their best seems to come naturally for all three of these acts. I wouldn’t beat that into their heads any more. Look at where they’re at, in the finale. Just enjoy it!” The first performance of the night was from Team Blake with The Swon Brothers.

THE SWON BROTHERS – TEAM BLAKE
“I love the fact that you’re singing in a falsetto. We’ve never heard yo do that before I don’t know what’s up Usher’s sleeve.” – Blake Shelton
Singing “I Can’t Tell You Why” by The Eagles

After their performance, Usher said, “It’s great that you guys finally found the girl quad in your voice. A classic record really goes a long way. It’s great to see you guys evolving.” 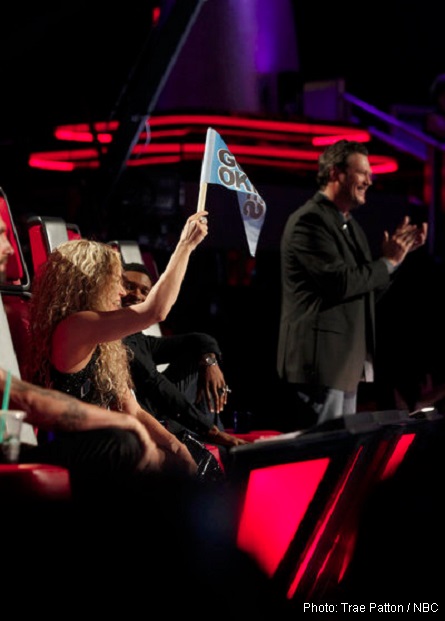 Pictured: (center) Shakira wavers her flag in support of The Swon Brothers.

Shakira held up an Oklahoma flag in support of the brothers, “I’m a fan obviously. Really good idea to do the song. This new you. I’m thinking what you have that’s so special is that you have this universal appeal.”

Adam said, “I’m really flattered and touched. They said you were doing this song for me because I’m a huge Eagles fan. Those guys are some of the best singers in the world.” Adam said The Swon Brothers lived-up to The Eagles.

Coach Blake stated, “This is the best season we’ve had so far. There’s a reason people can’t put their finger on why they love you. Because you guys are constantly evolving and expanding.”

Carson Daly describes Michelle as a “passionate Indy artist.” Usher said to Michelle, “There’s so much to come. You’ve been remarkable. I chose this record because it was a pivotal moment.”

After her performance, Shakira said, “Michelle I’m so thrilled that you made it to the finals. Your energy is crazy and contagious. I’m glad that America has seen what an original artist that you are. You are extraordinary.” Adam said, “You feel the energy in here. You can’t fabricate that. You can’t create that. It’s created as a result of what you do on stage. It’s either there or it’s not. People are screaming so loud that our ears hurt.”

Blake said, “Talk about evolution of an artist. To see you become this rock star, that’s happening right in front of our eyes. This is reality for you right now. You can’t make up this energy.” 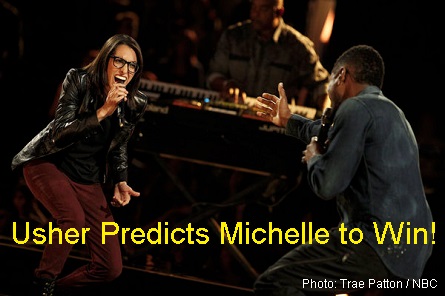 “Michell Chamuel the winner,” stated coach Usher about his prodigy. “This was a defining moment. There’s so much more to come. Years from now we’ll be able to look back at this footage. You are incredible. You can’t have that many relatives to keep screaming. That’s obviously fans,” said Usher.

Watch Michelle Chamuel Sing “I Knew You Were Trouble” Here

THE VOICE will be broadcasting the best video sent in from a fan of their best ‘Voice coach impersonation on the Live season 4 finale.

Danielle who is only sixteen, said she would watch, stare at the TV and would say if she was on “The Voice” she would pick Blake. “You’ve already earned the respect of Nashville,” Blake said to Danielle. 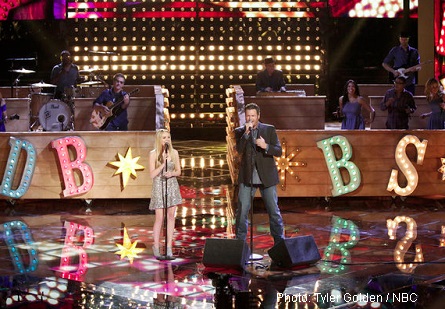 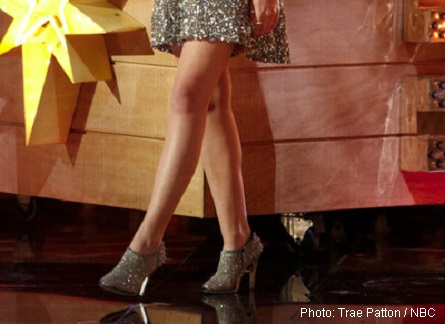 Pictured: Danielle ditched her cowboy boots for this performance with Blake.

THE SWON BROTHERS – TEAM BLAKE – Defining Moment Song
“For Zach and Colton to get up and sing like that showed people they deserve to be in the competition.” – Blake Shelton
Singing “Danny’s Song” by Kenny Loggins

Usher commented on the brothers’ performance, “It was as if I wasn’t here. I got lost in it. You guys did it such justice. What an incredible rendition. It was amazing.” Adam said, “Usher said everything that I was going to say. It’s such a classic record. It doesn’t feel like an old song. A true classic and you should be proud.”

Coach Blake said, “It doesn’t feel like an old song. It feels like it could be on the radio now. I guarantee you that they’ll be playing your version of ‘Danny’s Song’ on the radio.”

MICHELLE CHAMUEL – TEAM USHER
“She has a voice, and she just has to believe in herself.” – Usher
Singing “Why” By Annie Lennox

Michelle entered the competition at the Blind Auditions with Katy Perry’s “I Kissed a Girl”. After Michelle’s performance of the Annie Lennox song, “Shakira showed-off her Michelle glasses, and said, “It’s established how much I like you as an artist. People should know you are humble. That makes a perfect recipe for long-term success. One thing is to conquer people’s hearts and the other thing is stay in people’s hearts.”

Blake said, “That mirror trick is cool. It wasn’t reflecting her. That was a more laid back performance. I haven’t seen much of that and probably an important time to do that.”

Coach Usher said, “I think she’s phenomenal. I want to connect everyone to our story. The mirror takes us back to that. Likeability and capability – that is what you possess.” 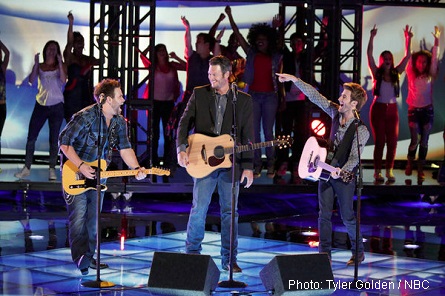 DANIELLE BRADBERY – TEAM BLAKE – Defining Moment
“It’s hard to come up with Danielle’s defining moment because she’s had so many.” – Blake Shelton
Singing “Maybe it was Memphis” by Pam Tillis

When singing “Maybe it was Memphis” the first time during the live shows, Blake said, “Danielle proves that she’s a great artist no matter what.” After her performance, Blake stood up yelling. Carson told him “sit your butt down.”
“You so quickly forget that you’re only sixteen when you’re singing. You’re really something special.” said Daly 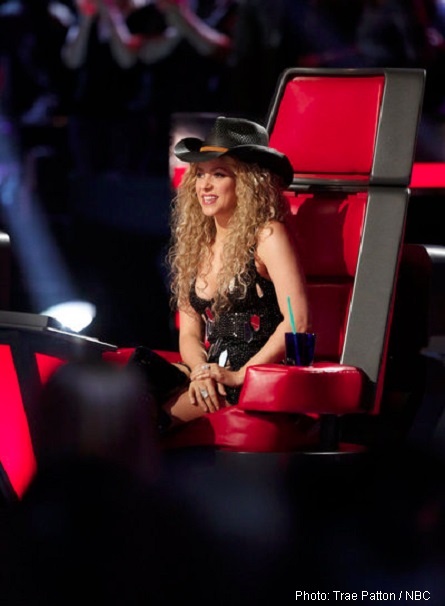 Shakira, now wearing a black cowboy hat in support of Danielle, said, “What you’ve done in this competition is you’ve grabbed the bull by the horns. No pun intended. You’ve gone straight to the vain of America. That is priceless.” 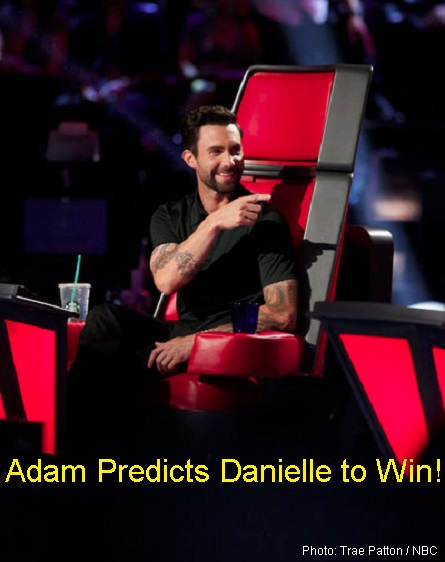 Adam said, “I am insanely jealous of Blake for grabbing you in the beginning. I also love you (to Blake) because you’ve done the right thing with Danielle’s voice. Unbelievably perfect and powerful I think Danielle is the winner of this thing!”

Coach Blake said, “Even though you’ve gone through the blinds and the Knockout rounds, that’s when America said to their TV screens I’ve just met a star. You are incredible.” 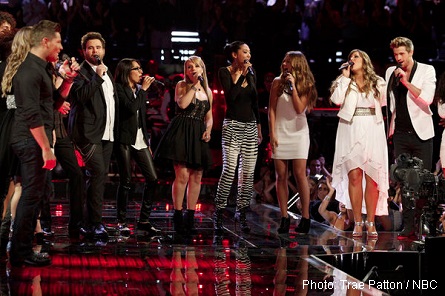 Pictured: The Top 3 perform with the Top 15.

Performance by the final three- The Swon Brothers, Michelle Chamuel, Danielle Bradbery- singing “Home is Wherever
I’m With You” The Top 15 from this season of The Voice joined the final three on stage in their performance. 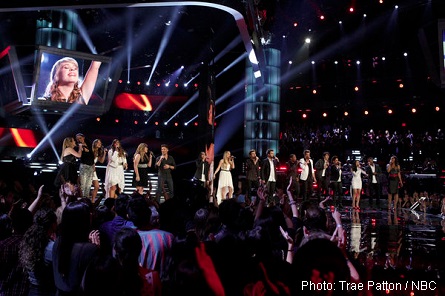 Pictured: The Top 15 perform on THE VOICE 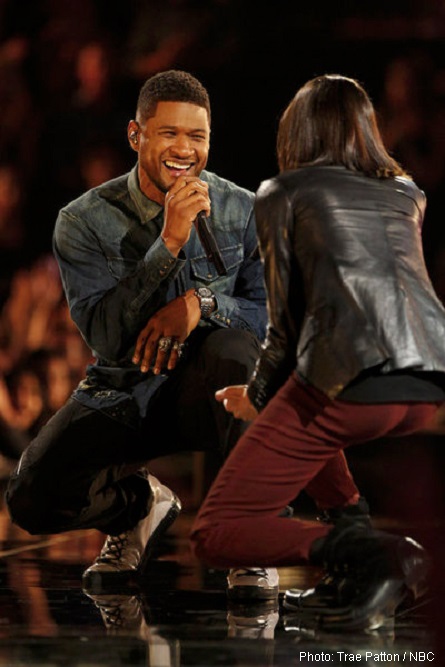 Her parents came to this country as refugee. Usher said to Michelle, “I’m happy that I could help you in your career. But, happy that you could help grow me in a different way.”

DANIELLE BRADBERY – TEAM BLAKE
“One thing that we haven’t seen her do is full on up tempo.” – Blake
Singing – “Born to Fly” – by Sara Evans

Danielle found her identity as a country artist on “The Voice.” Danielle said before THE VOICE, “I was a shy teenager before this in my room. My Mom signed me up for this and I just went for it.”

“During my first performance I could show some of my range that I could hit,” Danielle said, like with the song “Maybe it was Memphis”. She continued, “But If I wanted to make it to the finals, I had to sing something big.” Blake said about Danielle, “Next it will be Grammys.”

Usher reacted to her last performance of the night, “It’s obvious that you did a great thing by electing to go with Blake. If I only knew that Nashville was a state she would be on my team.” Adam was at a loss for words, “What else to say, I really don’t know. Your perfection is kind of boring me a this pint. You’re amazing still.”

Coach Blake stated, “As your coach at the end of the day. Danielle, honestly it’s hard for me to even look at you. I’m one of the millions of people out that that you have wrapped around your finger. I am grateful that you came here on the voice to introduce yourself.”

PLUS more of THE VOICE’S top three and season four’s winner in our article Third-Time Winner Breaks Record with Youngest THE VOICE Season 4 Winner!