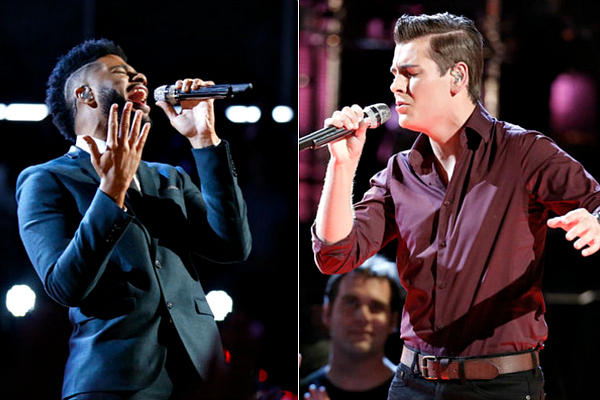 In the Live Playoffs week 2 of “The Voice”, the top 3 artists from each team to make-up the Top 12 performed live on Monday night for American voters who determined who will continue on next week as the Top 11 artists during Tuesday’s ‘Voice Results Show.

The first artist to perform of The Playoffs night one, was Team Gwen’s Braiden Sunshine. Next from Team Gwen was Korin Bukowski who received yet another makeover this week. This time, her hair was dyed to match Gwen’s – platinum blonde. 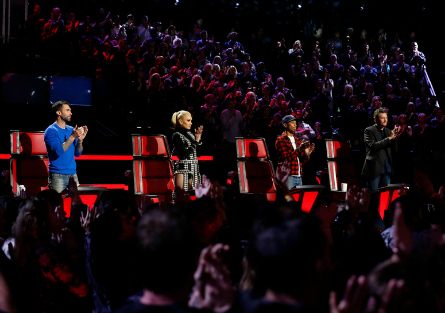 Team Adam’s Jordan Smith sang a spiritual song Selah’s “Great is Thy Faithfulness” and received a standing ovation from the coaches. Team Pharrell’s Mark Hood performed “Against All Odds” by Phil Collins and left the live audience screaming for more. Team Adam’s Shelby Brown got emotional when Adam (once again) asked her to get out of her head. She ended-up messing-up on her performance, but made an impressive comeback in which Adam stated was her best moment on the entire show.

Zach Seabaugh from Team Blake disappointed a number of fans and notably Adam Levine when he failed to showcase another Elvis move onstage this week. Nonetheless, Gwen said she thinks Zach is destined to be a “HUGE star!” 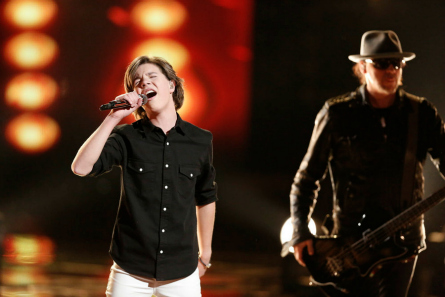 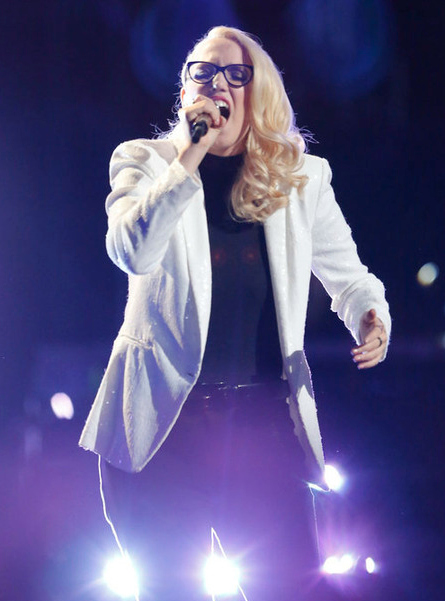 Korin Bukowski – Korin sang “Titanium” by David Guetta. This week, Korin’s hair got another treatment, dyed platinum blonde which matched her coach Gwen Stefani’s hair. Blake told Korin that she “nailed it” and to keep thinking that she’s not cool. Pharrell told her it is suppose to feel “transformational”, and she has a great time every time she’s on the stage. Gwen said she loves being part of Korin’s journey and Korin did the song exactly as she envisioned. 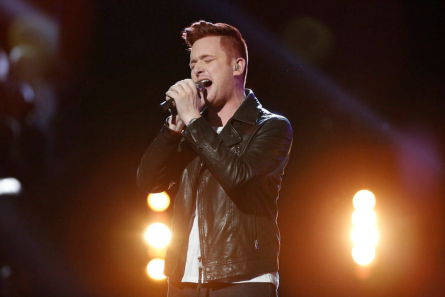 Jeffery Austin – Jeffery performed “Let it Go” by James Bay. Adam said to have a voice as unique and powerful with a strong stage presence is the coaches’ greatest dream and for him to have progressed to that level since the Blinds. Blake commented on Jeffery’s strong voice and perfect pitch which is why he thinks Jeffery could win. Gwen reacted “Oh, my God, this is crazy” and pointed out how “hot” he looked with his hair dyed slightly a darker shade. She stated that he took the song to another level. 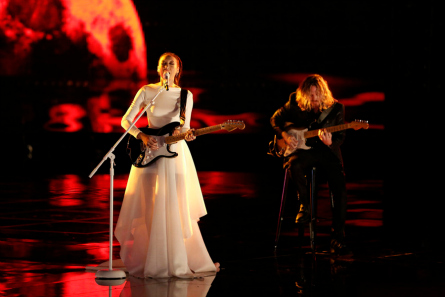 Amy Vachall sang her own take on Drake’s “Hotline Bling” making it a unique version.

Shelby Brown – Shelby had an emotional break-down during rehearsal with Adam. She sang Jamey Johnson’s “In Color.” Blake called her a powerful singer, and complimented her for recovering after she got ahead of the band. Adam said she recovered with the most powerful note which was her best moment on the entire show. 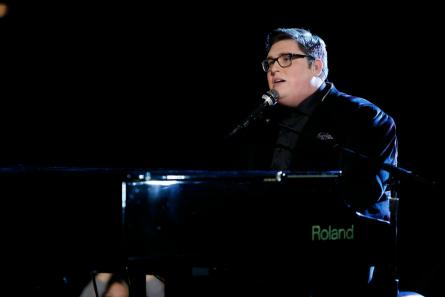 Jordan Smith – He said he never imagined that auditioning on “The Voice” would change his life this much. He sang spiritual song Selah’s “Great is Thy Faithfulness” that he sang at The Vatican and left all the coaches standing after his performance. Blake mentioned that the song was great timing with the Paris massacre just happening and thanked him. Adam said Jordan’s voice made them feel rejuvenated. 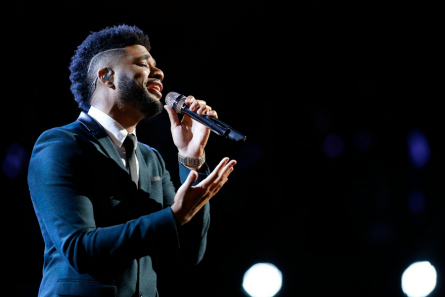 Mark Hood – Fans in the audience were screaming uncontrollably after he sang Phil Collins song “Against All Odds.” Gwen said he showed a calmer, and more sensitive side of himself and he’s one of her favorites. Adam said he can feel that Mark wants this maybe more than anyone else and Mark gives 210%. Coach Pharrell reacted with “let’s do it again” and the crowd cheered.

Madi Davis sang Jewel song “Who Will Save Your Soul”. Madi decided to lose the guitar while performing the song and put her spin on the song. Gwen called her awesome and recognized Madi’s shoes as the same ones Gwen wore the night before. Blake said Madi “snuck-up on him” in this competition and when she changed it up tonight, it makes people take notice of her again. Coach Pharrell pointed out that Madi is 16-years-old, and the audience screamed. He said she knows exactly what she wants to do in the way she dresses and how she sings. 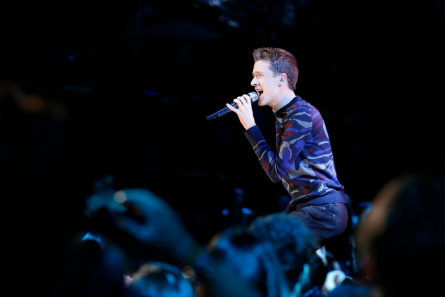 Evan McKeel sang “This is It” by Kenny Loggins. Gwen said it made her say “Wow out-loud three times. Pharrell said you feel it. 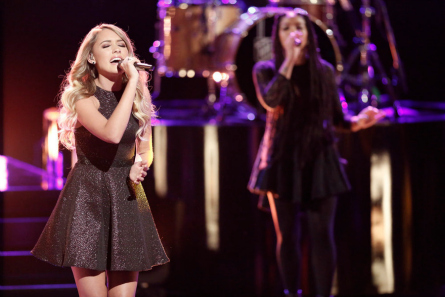 Emily Ann Roberts – “There’s no reason you can’t be the new powerful mainstream country artist,” Blake told Emily. He gave her a song by Patty Loveless “Blame it on Your Heart” which he said will let her showcase attitude. Gwen liked the song and was surprised. Blake said she’s graduated now and treating the stage like it’s HER stage now.

Barrett Baber sang “Right Here Waiting” by Richard Marx. Adam reacted that he loves that Barrett can attack any vocal and shows his determination and passion. Coach Blake agreed that he also loves that about Barrett, and what comes out of Barrett is real and makes him a “real artist” and he’s a “great singer.” 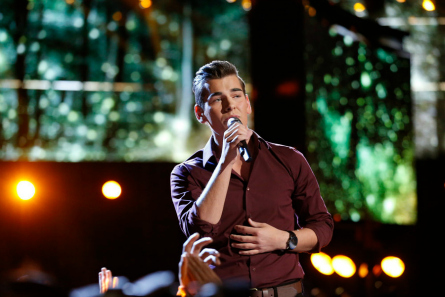 Zach Seabaugh – Blake compared Zach to Josh Turner and Randy Travis. But onstage, “he’s like Elvis.” Blake wanted to bring him to the “romantic side” and gave him the song “My Love.” Pharrell called his range and age (17-years-old) “crazy”. Gwen said his stage presence is so seasoned, and natural. She predicted that he’ll be a HUGE star. Adam commented that last week he didn’t know he could gyrate but tonight was more subdued and wanted more “Elvis’ stuff”. Blake said he’s never had anyone on this stage where he feels like Zach could walk off stage and get onto a tour bus.

“The Voice” host Carson Daly announced that every artist was in the Top 100 of iTunes, and three of them were in the Top 3 on iTunes. “The Voice” multiplies those by ten to add to the artists final scores.

The first save of the night by America’s votes was Team Adam’s Jordan Smith. The second artist announced as saved was Jeffery Austin from Team Gwen. 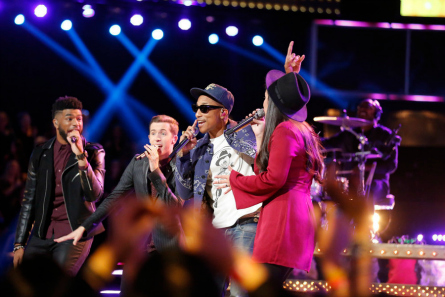 The remaining ten artists were: Amy, Korin, Emily, Zach, Mark, Madi, Evan, Shelby, Barrett, and Braiden. Mark Hood said he’s not a one-trick-pony and wants to show the other side of himself. Madi Davis said she wants to be the best version of herself every time she’s onstage. The next artist America saved was Team Blake’s Emily Ann Roberts. From Team Pharrell, Carson Daly announced that Madi Davis was moving on to be part of the Top 11. 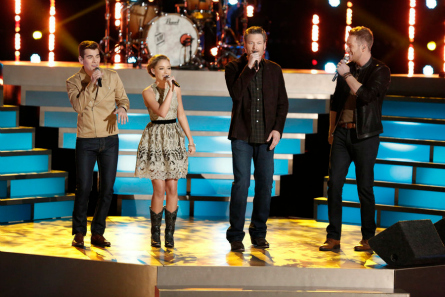 Evan McKeel said you should do what you love, and music is what he loves and he’s doing that no matter what “because music makes me the happiest.” The next artist that America saved was Team Gwen’s Braiden Sunshine. The next two artists also saved were Barrett Baber from Team Blake and Amy Vachal from Team Adam.

Korin said she learned how to change her look from Gwen and to “find the ultimate part of me.” Shelby said Adam helped her explore who she is. The next artist saved out of Zach, Shelby, Korin, Evan, and Mark was Team Pharrell’s Evan McKeel. The next artist was Shelby Brown from Team Adam, making all three of his artists going to the Top 11. Team Blake’s Zach Seabaugh is moving on to the Top 11, also making Blake’s full team moving on next week. 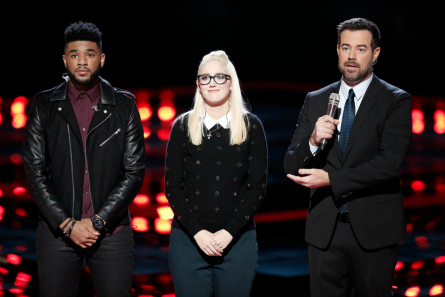 The bottom two artists were Korin Bukowski (Team Gwen) and Mark Hood (Team Pharrell) who had to perform for their lives in order to remain in the competition. Mark sang “Signed, Sealed, Delivered, I’m Yours”. Gwen called his spirit “big” and magic. Mark brought back memories for Adam when he was scared to perform with Stevie Wonder. Blake called Mark “fun to watch” and advised him not to think too hard about being in the bottom. Pharrell told Mark he’s proud of him. 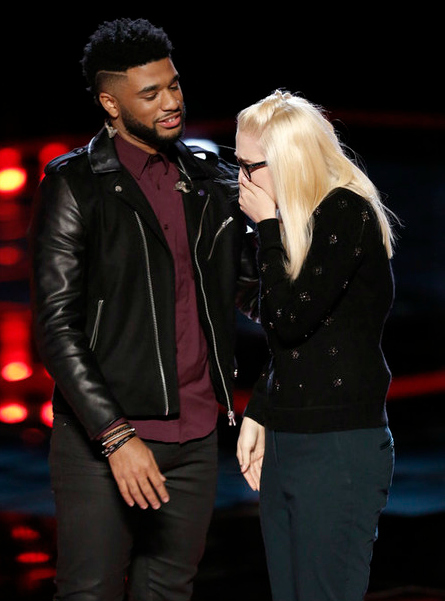 Mark’s last words was that if it’s the end for him, then he’s content. Korin thanked all her fans and stated that they built her. The artist that America instantly saved was Korin Bukowski. 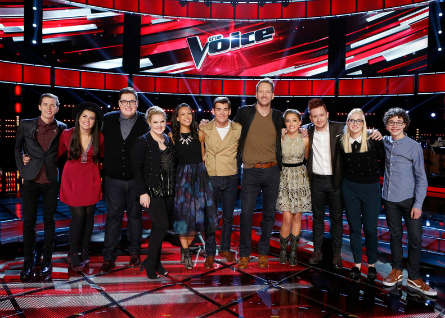