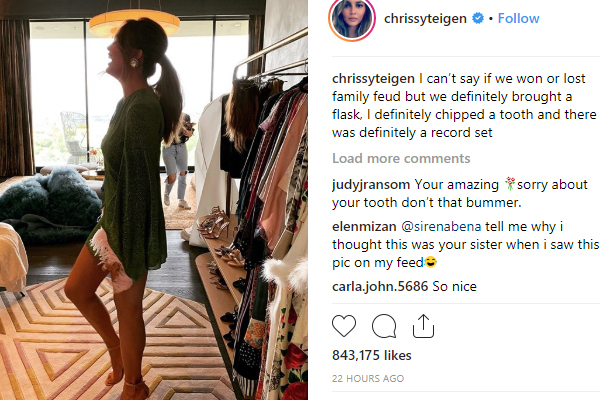 It was obvious by the end of the show taping that the headline episode of “Celebrity Family Feud” this season would be the Legend vs. Vanderpump one! The game was fully entertaining which showcased a drunk Chrissy Teigen, wife of John Legend, who pranced around the stage in a way too short dress. Um, yes we (the audience) saw her underwear by the end of the show.

Lisa Vanderpump brought her rescue dog and was playing for her new foundation called “Vanderpump Dog Foundation.” John Legend played for City Harvest. The winning side got to play for $25,000 on the Fast Money round at the end of the game.

On Lisa’s side were Tom Sandoval (partner), Ariana (his girlfriend) Katie, Tom Schwartz  (married to Katie) who owns “TomTom” with Tom Sandoval.

When meeting John and Chrissy Steve asked how they met. He asked for Chrissy’s side of the story. Which was a bit risque and most likely will be edited out of the final cut. She answered that they met in a music video she worked on. Then they had sex. She went on…”he invited me to his hotel and asked if I wanted shrimp cocktail.” She covered her moms ears as if this was all new to her.

Steve said he’s never smoked weed. He doesn’t drink. Maybe two drinks per month. But, NOT in a row. His brother died of alcoholism.

Steve said he bought his first car used at age 38. But, somehow he also added, that at ages 30 to 33 he lived out of a car. Maybe not his own?

A mom of a young girl in the audience asked Steve what advice does he have for her 17-year-old daughter. Steve told the young girl, “follow your dreams, NOT your passion.” He said live your imagination because what God has planned for you, he places it in your imagination.” He added that guys are “assholes.” The parents responded that it was good advice.

Chrissy said they were going to go home and watch “Perfect Bid” which is a movie about the “Price is Right” game show. She also said “I am so drunk.” She didn’t understand the answer that people cheat on thier jobs. Steve told her because “you don’t have a job. You’re a free lancer.”

On Ryan’s side was his wife Khrina, Devon (his brother), Jennifer (mothet-in-law), and Jeff (his friend). They played for the George National Foundation.

On Kevin’s side was Robin (his brother), Jennifer, Shane (brother), and Dwan (brother). They played for the Easter Seal. All the men were bald on his side, along with Jeff on Ryan’s side. Steve was excited about that and all the men, including Jeff who ran other to join, all gathered around

Steve recalled back in the day when he played a show in Arco Stadium in Buffalo, New York with the Kings of Comedy – Cedric, D.L. Hugley, and Bernie Mac. They wanted to be able to smoke in the venue, so they would pay he $7,500 fine in advance. The Fire Marshall came and Bernie Mac (who’s all mumble) explained twice. Finally, after the fire marshall understood he asked if he could smoke a cigar with them, which they did.

One of the players answered “money” as something you didn’t love as a boy but like as a man. When that wasn’t on the board, Steve told the story of how one day when he was little, him and his buddies threw-down over a dollar they found in a neighbor’s driveway. He said he’s never not liked money.

Harvey said he has a stand-up written. He’s just waiting for someone to ask. The magic number for both Steve and Kevin as the amount of money they’d have to have in order to never work again is $1 billion.