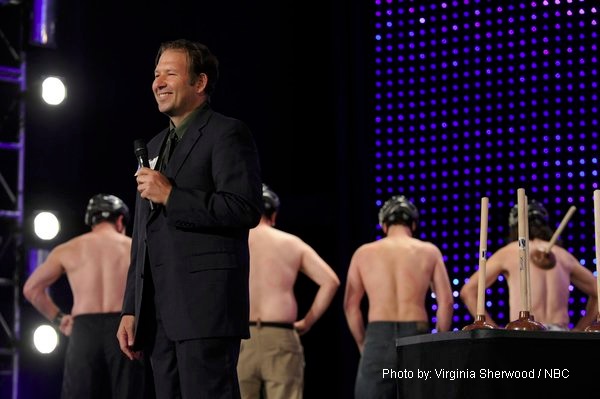 Week six of NBC”s “America’s Got Talent” included auditions from the cities of Hollywood, New Orleans, and ended in New York. A variety of acts had the judges saying “No” especially while Howie Mandel was gone for a good portion of the Hollywood auditions. Judges Heidi Klum, Howard Stern, and Mel B. rejected ridiculous acts that included plungers, stripping (not really), and a comedian. Once Howie arrived, more ridiculous continued, along with some real talented acts.

Rox is 14 years old. She said that her parents are an inspiration. Olivia said she got the opportunity to go on stage with her father when she was only 2 years old.

For her audition, Rox sang “As Long as You Love Me” by Justin Bieber. Her rendition included very random high notes and low notes. Mel B. said, “You have to be careful where you take it and not peek so soon. The good news is that you’re 14 and I’ve never heard anything like that before.” Heidi said, “I love it. You are beautiful and your voice is beautiful.”

Howard reacted, “It was a disaster by phenomenal proportions.” Heidi said, “If Howie was here, he’d like it.” Howard agreed with her, then told Farnham, “We won’t be seeing you anywhere, anytime soon!” Mel B. said, “Plungers being thrown only hairy man’s backs is not up my alley.”

“One of the good things about Howie not being here is that none of the numbnooks are going through,” Howard said.

After his act was done Howard stated, “That was a colossal waste of my time!”

Watch former male stripper Perry Kurtz as he raps an original jam, don’t worry he keeps his clothes on for this performance! Here

Howard said told him to “Get off the stage. Enough!” Mel B. said, “Howie would have loved him.”

He stands behind a makeshift TV and uses props to try and make it to Las Vegas. Here

Howie arrived in time for an act called “Tummy Talk”. 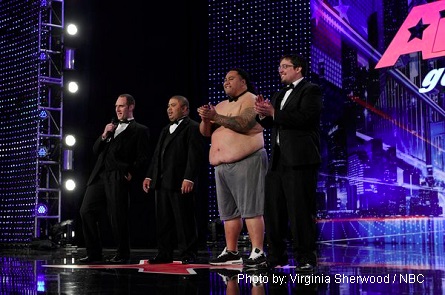 This act consisted of men slapping an overweight man who stood on stage with his shirt off to make a rhythmic sound. When it was over, Mel B. said, “There is something very interesting in what you do. I don’t know if I liked you slapping him so hard.” Howie asked, “What if you had someone who didn’t have as much girth?” They responded, “We can try it on Nick.” 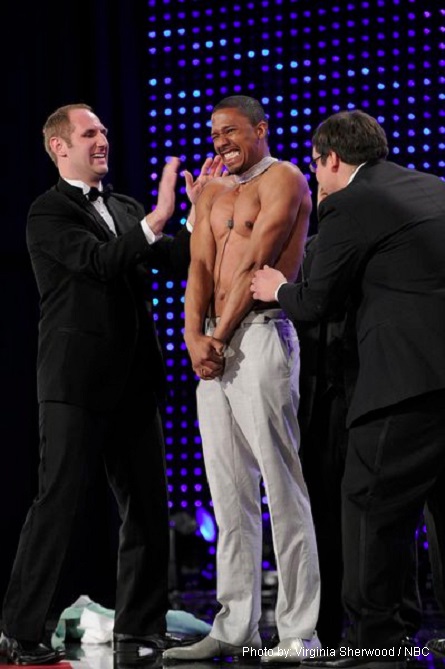 Nick Cannon took his shirt off, and they played on his chest and stomach. Nick was tickled by their multiple slaps. When it was time to judge, Heidi asked, “Is it wrong that I liked it?” Howard was somewhat disturbed and said, “I’ve been sitting here quietly thinking about my life and where I’m going. I didn’t like it.” Howie loved the act and stated, “I laughed. I though it was gimmicky. It’s a ‘yes'”

The young group of skaters skated on plastic on stage while performing multiple tricks. Howard said, “This is fantastic! Also, I’ve been saying for years, lets’ bring back hot pants. You are doing it and I love it!”

Heidi said, “It was nerve wrecking. It was dangerous. I loved it!” Mel B. thought the act was a nice change of pace, “You guys are refreshing. I was nervous and nauseous. But it was brilliant. Well done!” she told them. Howie said, “I have seen it all. But we have never had a ice act. To do it at the level you did, blows it out of the water!”

“SensEtion” act is dance, video and projection as explained to the judges by the act. They said that they’ve been working on the act for only one year. The first time they’ve done it was on stage last night on “America’s Got Talent.”

“I see a lot of possibilities with this act. I think you guys are onto a really good idea. I could see more dance incorporated into it,” said Howie. Heidi was not impressed and told the act, “I was a little bit bored. I liked the idea of what you guys do in the dark.”

Mel B. had some encouragement, “I do see your dance potential and I was impressed. I think it was a great unique idea. I want to see more.” Howie said, “I thought it was new and original and I was thoroughly entertained.”

These two young children danced the Samba and ball room dances. Heidi asked them what they would do with the money if they won the AGT grand prize. Daniela said, “I would give some to the whole world who are poor. We’re going to share it and we’re both going to have a mansion.” Yasha said, “I’m going to save some for college. And, like she said, get a mansion.”

After their performance, the audience gave them a standing ovation. Heidi said to the duo “Amazing! I cant believe how you can shake those hips around. I might have to get some training from you.”

“The whole routine was great! I am kind of speechless,” said Mel B. Howie asked how long they’ve been doing this. They said since they were three years old.

Howard sated to them, “Some people have it. Some people don’t. At such a young age, you two have it. I would love to see more of you in Vegas.”

Rose is from Kentucky. At age thirty-three, Rose said He’s been singing since he was a kid. He said it’s something that you would go after because it’s too unachievable where he’s from which is a small town. “When you get shot at. You look at things different. You look at life different. I don’t want to be the one at 78 years old wondering what would have happened if I had have chased my dream.”

Rose served four years and is U.S. Marine Corps veteran. He’s also a former coal miner. Howard reacted to his performance with, “That was a damn good song. I think you voice is very strong.” Howard was also very positive and told Rose, “As a program director, I would have added your song.”

Heidi said, “I think you have a beautiful and natural sound.” Mel B. told him, “You have a great voice.” Howie said, “I really need you to be a part of this competition. You are what we are looking for. Yes!”

Able performed with a pieced together guitar made out of broom sticks and crutches. Howard reacted with, “I don’t want to be mean. but what are you doing with your life. I like that you think out of the box, but the box exploded!” Mel B. said, “It was too bazaar.” Howie said, “I think you’re using the first one as a crutch.” They voted “No.”

Watch Abel, the musician that plays instruments made out of brooms and crutches. Here

An act who makes us think of “Professor Splash,” Captain Explosion is 65 years old. Nick asked Captain Explosion how did he think of blowing himself up. He responded with, “Another guy told me how to do it.” The judges and audience had to view his stunt outside. His act consisted of him placing himself inside of a silver box that looked like it was lined with tin foil on the ground. He then exploded the box. He escaped without a scratch.

After watching his stunt outside, the judges told him what they thought of it back in the studio. Howard said, “Captain Explosion Hmm. this is a tough one. In order for your act to work, we have to be included that something dangerous is happening.” Howie did not agree with Howard and said, “I think you are 100% wrong. I thought it was amazing and scarey.”

Howie asked Heidi if she was scared. She said “yes.” Howie made his point to Howard and said to Captain Explosion, “You did your job.”

Mel B. said, “the box was not frightening.” Howard voted “No.” Howie stuck-up for Captain with, “It was definitely dangerous, we knew there was explosions.” Howie voted “Yes.” Heidi who voted “no” said, “I don’t want to see you blow up” Mel B. said, “It wasn’t fun enough for me.” Howie was upset that the act did not continue with the trip to Las Vegas.

Watch crazy “Captain Explosion” get in to a box with a couple pounds of explosives and blows himself up! Here

She’s only eleven years old, and says that she’s not “a girly, girl”. She’d rather go outside and play.

“I had to actually remind myself they you’re are only 11 years old . You can sing,” said Mel B. Howie said, “You are going to be able to have a career in this and be able to afford guns, and ..etc – Howie said.

Howard said, “I do sometimes think someone starts out a little too young. In your case, I thought you were terrific.” Heidi reacted, “Hasn’t a child ever won AGT?” Howie said, “Season One.” Heidi told Chloe, “I think it’s about time again.”

She’s 21 years old and said she is a very spiritual person. She said she could see Howard’s “pure heart.”

Howard responded to her act when she finished. “I think you’re really good contortionist and a really bad belly dancer,” Howard said.

Howie said that he “understood” Amigo and said, that she doesn’t want to be “Boxed-in.” Howie said, “You don’t want a structure,” and he could relate to that.

Howard told her she wasn’t “ready for season two.” Heidi voted “No”. Howie wanted Megan to go through and said, “I understand you. It’s a “yes”.

They are a young band made up of siblings and friends ages 14-22. This band is below the legal drinking age and performs at bars, hospitals, and subways. 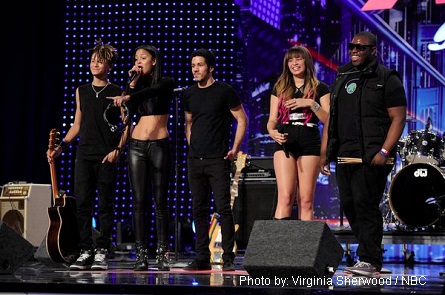 For their audition, they sang “Rumor Has It”. Heidi said, “Great energy about your self and had me the whole time. I wish you two girls had your own moment to shine.” Howie reacted with “You kids are going places. I think you have a career. I think this was an amazing performance.”

Howard asked Mel B. “Maybe you saw a little bit of yourself in this band?” Mel B. responded, “I liked what I saw.” Mel B.’s own band “The Spice Girls” inspired the sisters of this act, and they were excited to meet Mel B. who gave them a hug. “My favorite so far! My FAVORITE so far” said, Mel B.

Watch 212 Green cover Adele’s hit “Rumor Has It”. Compare to Adele singing ”Rumor Has It” live at The Royal Albert Hall in 2011. Here

Harris told the judges that he worked at a prison correctional facility. Howard responded, “The only audience you’ve had is a captive one!” 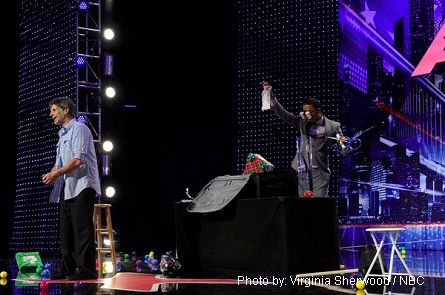 Howard said one of their mistakes was, “Maybe you should have opened with stool softener. You remind me very much of Howie Mandel.”

Heidi said of the act “It really wasn’t that funny.” Mel B. said, “It wasn’t good honey.” The audience booed her. She said, “What, You don’t agree with me?”

Howie voted, “I think you’re lovable, nutty, your the king of bad jokes.” Howie Howie stands up to the audience and chants “Vegas, Vegas”. To Mel B. Al said, “When you become 70 years old, make a perfume called ‘Old Spice'”. Melanie laughed as he exited the stage.

Tuesday’s AGT episode: It’s the last chance before Vegas. Most memorable acts of the season. “Why do I feel we’re about to have a Susan Boyle moment?” -Howard

Watch “Aerosphere” float above the crowd while twisting and turning! Here

Watch Johnny Jetpack and find out why he is the worst puppeteer that Howard Stern has ever seen. Here

Watch Distraxtion’s Human like puppet act that got the Judges all worked up! Here