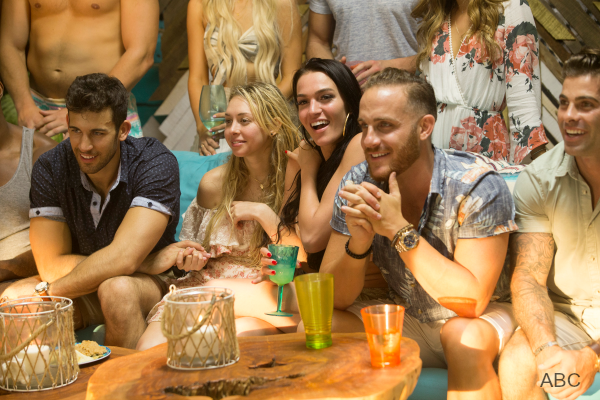 “The Bachelorette” and “The Bachelor” rejects land in Vallarta-Nayarit, Mexico for the fourth installment of summer fun, and this time, controversy in fans’ guilty pleasure called “Bachelor in Paradise” (BIP).

“It was the season that almost wasn’t” said host Chris Harrison just before introducing some of his BIP contestants to a stuido audience based episode. Because of the scandalous gossip that ripped through social media and entertainment news headlines a month ago after filming was shut-down by the show’s upper echelon (Harrison compared the show to a corporation), BIP had to address the issue and fill-in filming gaps somehow. Hence, the studio episodes will be used to do that for the first two episodes this season. Segments from the studio interviews will be placed into those episodes. The show will also have a live finale.

It was clear, from what we gathered from a source, that no one from the cast ever made a complaint of any sort of any incident. Both Corinne and DeMario stated that they were “pulled” and talked to. More on that later.

“Bachelor in Paradise” plans to air the first episode of the show in the same format it has each season with host Harrison welcoming each member to Paradise, and the contestants getting to know each other better by hanging-out and drinking alcohol. After the production stopped, however, according to Raven and other cast members, they remained on the island and continued to interact with each other with NO cameras rolling for approximately five days. So, after production started back-up, there were already some relationships that had formed. 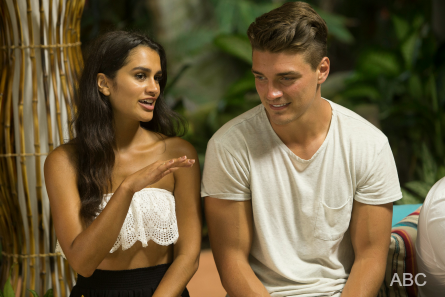 Wells Adams from JoJo Fletcher’s “The Bachelorette” season 12 is on the beach with the cast as the new bartender. He’s replacing the popular Jorge Moreno, who is now running his own tour company. It’s reported that Wells has a previous connection with BIP cast member Danielle Maltby from Nick Viall’s season of “The Bachelor”. Only problem is, as the bartender, he’s not allowed to date the cast!

BIP cast members that joined Harrison in the studio were Robby Hayes, Raven, Derek, Diggie, and Alexis. They were asked questions by Harrison to disscuss the much talked-aboug Corinne and DeMario incident. All, except one cast member didn’t think production on BIP would pick back up. Derek said about the producers, they “looked like the life dropped out of them” after the production shut-down over Corinne and DeMario.

Raven and Robby had a connection in the beginning. But, then he went to Amanda Stanton. Derek and Taylor are an item in episode one. But, previews show there will be a “rocky road” ahead for the two in Paradise. Dean had a connection witih Kristina until Danielle Lombard showed-up and asked Dean on a date.

Evan and Carly, who became a couple during their time on last season’s “Bachelor in Paradise” came out to talk about their wedding which was filmed by “Bachelor in Paradise” crew with Harrison officating. That will air on Tuesday, August 15th. They were also there to annouce that they’re expecting a baby. Carly stated she’s about twelve weeks along. Yet, too early to determine a gendar as they saw in the ultrasound performed on stage.

Harrison conducted a sit-down interview with DeMario Jackson. DeMario said the hardest thing for him was seeing his mom cry every day over the scandal. He cried on stage while talking about it. DeMario also stated that he felt bad for the crew who wouldn’t have jobs any longer if production remained down. Before getting onto the plane to head home, DeMario said he called his dad to tell him he got “kicked off Paradise.” His dad told him that reality shows are not for him. When the negative story came out in the media, he said he can understand President Donald Trump labeling “fake news” stories. DeMario said he read the article that was published that stated he took Corinne’s “limp body” out of the pool. He said he didn’t understand where the writer got that. It was all made-up.

He also took a page out of former First Lady Michelle Obama’s book. When they go low, you go high. He said it was really tough to go “high” as he cried on stage. DeMario said he wanted to show people who he is. His dad told him “people will do that for you.” It was true. Because Raven and the others rallied around DeMario and stuck-up for him. 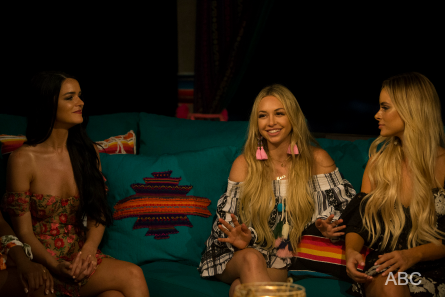 And, YES – Chris Harrison also interviewed Corinne for another episode which will air in the coming weeks! According to a source, Corinne said she was a “victim” of the media (NOT of DeMario Jackson) in how the incident was portrayed by news outlets. She recounted the first few days in Paradise that included a nasty mix of a new medication she was taking along with too much alcohol that caused her to black-out, as previously reported by TMZ.