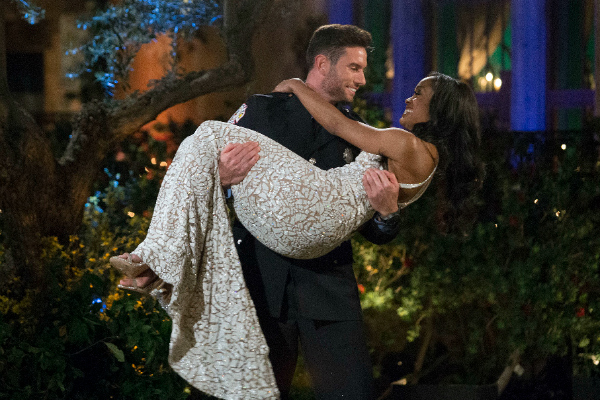 After making it to the hometown dates on Nick Viall’s “The Bachelor” season last year, Rachel Lindsey was sent home. But before that, ABC and the producers of “The Bachelor” had already broken the news that Lindsey would be America’s next ‘Bachelorette, a landmark moment in Bachelor franchise history which up until that moment had gotten much scrutiny for never having an African-American Bachelor or Bachelorette until now. 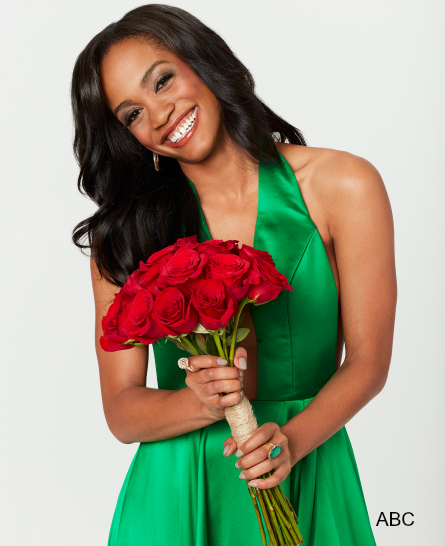 Rachel Lindsey, as one dater described her, is a triple threat. She has brains, beauty and personality. As a defense civil trial attorney, Rachel said “it’s hard to take off that lawyer hat an put on the love hat.” In “The Bachelorette” premiere episode, she admitted to that while on “The Bachelor” show she was skeptical she could fall in love with Nick and it was hard for her to express that. “I knew how I felt. But, I really waited too long to express that to Nick,” stated Rachel. On the up side, Rachel said “If I’m just myself and I keep it real. Nothing can go wrong for me.”

“Pretty Boy Pit Bull Kenny King” is a professional wrestler with a ten-year-old daughter. Outside the ring, he seems like a sweet-heart. Kenny said his daughter McKenzie is the most important person to him and he’s ready to bring someone like Rachel around her.

Jack is a 31-year-old lawyer from Dallas, Texas. He’s the only child and his mother passed-away from cancer while he was still in high school. Jack said he wants a big family.

Alex is 28-year-old from Detroit, Michigan and is a computer nerd who likes to pump iron. Mohit is a 26-year-old start-up owner from San Francisco who likes to dance Bollywood with his family in his spare time.

Lucas was the most memorable for sounding-off his rambunctious catch-phrase “Whaaa Boom!!” loudly every chance he gets. Then we have a possible sex-addict in Blake E. who is a personal trainer who bragged about his abundance of testosterone and noting that his past relationship was predominantly about sex. “Many women have told me about the amazingness of my penis” Blake bragged.

Diggie stated that he’s passionate about fashion. Josiah can talk Rachel’s language as a prosecuting attorney. He had the misfortune of loosing his older brother at the age of seven when he committed suicide in his family’s backyard.

The morning of the day that Rachel was to meet her thirty-one suitors, she had a get-together with her “squad” at the Bachelorette pad. That is, some of the ladies that she competed against during Nick Viall’s season, came over to give their advice from what they learned from their experiences from being on “The Bachelor”. Those squad ladies were: Astrid, Whitney, Kristina, Corrine, Alexis, Raven and Jasmine. Alexis’ advice was not to judge anyone who comes in a costume! Good advice coming from her infamous shark, no dolphin costume that she arrived in on “The Bachelor”.

Whitney warned of a young man she knew from a friend that would be competing for Rachel on the show – DeMario. She told Rachel that he’s not there for the right reasons. Rachel insisted that she would still give him a chance to see if his intentions are genuine.

Rachel stated that the most valuable advice that she got was when Raven told her during Nick’s season “you just have to let yourself fall.” Rachel said that was the turning point for her on “The Bachelor.” Raven, who was tearing-up stated that they all love Rachel because she brings out the best in all of them.

Rachel told host Chris Harrison that when she met Nick, “I was hopeful But, didn’t think it could happen to me”

Next, it’s that time again! Time for “The Bachelorette” contestants to arrive in limousines to make their first impressions to the woman that they could be possibly proposing to. The first male to leave a long-lasting impression was Bryan who is Colombian and spoke sexy Spanish to Rachel. She knew just enough to get the gist of what he was saying.

A few limousines into the night, brought the one filled with some of the guys that Rachel met earlier during a live broadcast of “After the Final Rose” from Nick Viall’s season. The man, Dean, that told her “I want to go black and never go back” finally got her feedback on that statement. Rachel responded “it was cute. I love the confidence.”

The next suitor who got his second chance at an introduction was Blake E. He arrived with a full-on marching band and told her that his last entrance was less memorable and wanted to “drum-up something new” for her. It worked because Rachel said Blake made a better impression this time around and Blake “stood out”. 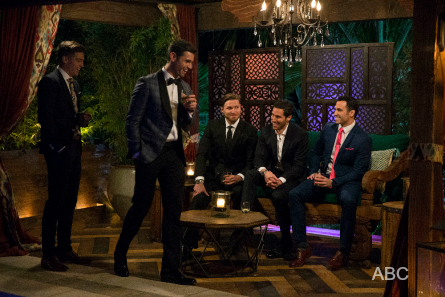 One of the many surprises for Rachel was getting an old classmate thrown into the mix. Fredrick Johnson was someone she went to school with whom she said she recognized as soon as he got out of the limo. It was 15-years ago since she saw him, and remembered him from third grade as being “a bad kid”. No points scored there!

As more suitors arrived, more of them began to cultivate their intros with props and gimmicks! Jonathan had Rachel close her eyes with her arms out while he tickled her sides. He said he wanted to make sure that she had a good laugh tonight. It worked because she laughed really hard. Another dater came with a vacuum cleaner and stated that he was part of the clean-up crew; one held an Instant Polaroid camera to take selfies with Rachel. However, Lindsay got a little freaked when Adam arrived with “Adam Jr.”, a stuffed doll that was a little creepy looking. After he walked away, Rachel stated that she liked Adam, but NOT Adam Jr.

Matt arrived as a penguin because he knows Rachel likes penguins. He told her that once penguins find their partners, they are mates for life. He told her he’s hoping that can be true for him. That made Rachel like penguins even more she replied. Then, to top that off, a gentleman arrived in an ambulance to make the statement that he’s there to “save her”. However, to really top that was Lucas, the “Whaa Boom!” catchphrase guy! He proceeded to blast the rest of the men’s ears through a mega-phone for the rest of the night. They labeled him as “the crazy one!” 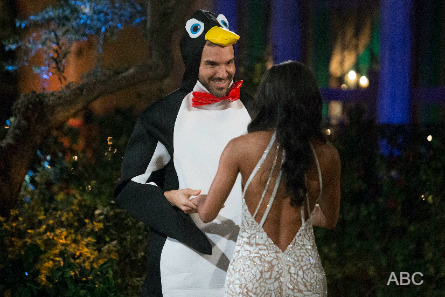 Rachel admitted that she couldn’t get past Fredrick’s bad boy past. The sexiest guy yet was Bryan from Colombia. He stole the first kiss from Rachel and spoke a bit more Spanish to woo her. Then entered Chris Harrison to drop-off the First Impression Rose for Lindsay to give to one lucky man which would guarantee his place there for another week. After that, the men all started getting nervous and more competitive against each other. At one point, five men were literally lined-up waiting to talk to her.

Blake pulled “Whaa Boom” Lucas to the side to call-him out on being there strictly to be on TV and not for Rachel. Seemingly in a drunken slump, Lucas sleepily replied against that accusation.

Josiah kept annoying other men around him by continually stating that Rachel was going to be his wife. He said he thought that Rachel was too good for Nick Viall and it was Nick’s biggest mistake not picking her. After all the men arrived, Rachel later told Harrison that “it’s hard for me to say I met my husband. Is there potential? Absolutely!”.

Rachel ended-up giving the First Impression Rose to the man she said she “felt something un-explainable,” which was Bryan. The men were trying to speculate how many of the thirty-one there would get sent home that night. 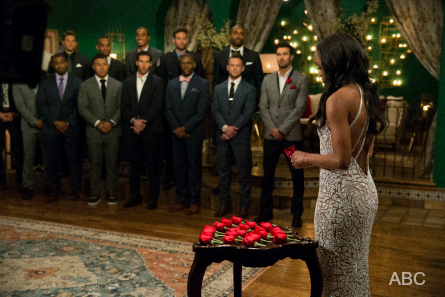 Believe it or not, the final rose went to “Whaa Boom!” Lucas! The men couldn’t were disappointed in Rachel’s last rose choice. 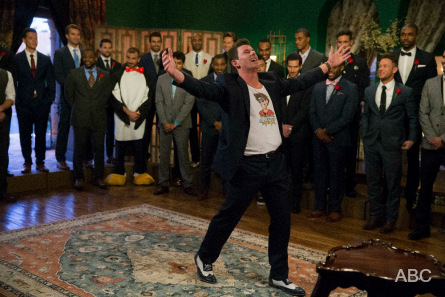 SNEAK-PEEK: The previews for future episodes showed a lot of the guys accusing Lee for covering-up a secret. Then Rachel gets informed that one of the guys there has a girlfriend by his girlfriend! Rachel is seen making some promising connections with some of the guys, one of whom is penguin guy Matt. She said about one of the men (we don’t know who yet) “we connect within. I’m letting love lead the way.”