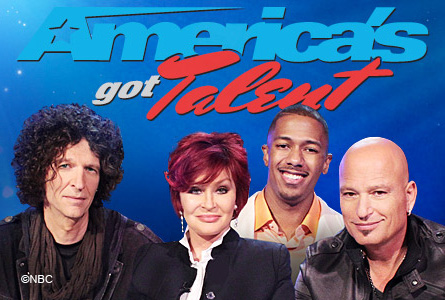 EXCLUSIVE! SET REPORT!….SPOILER ALERT! SPOILER ALERT!
When “America’s Got Talent” stopped in Los Angeles during the show audition rounds, HOLLYWOOD JUNKET was there on the set for both days of filming. Day one here: https://hollywoodjunket.com/2012/04/22/americas-got-talent-season-7-exclusive-first-day-sneak-peek/ Here’s an exclusive report on the acts we witnessed and some of new judge, Howard Stern’s comments to show hopefuls trying-out. 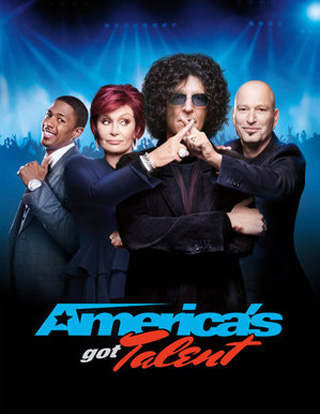 The first act of day two was William Close who creates musical instruments and said he had been inventing them for ten years. His act involved stringing his instrument, called an “Earth Harp”, above the stage and across the edge of the theater’s balcony and he played it. Show judge Sharon Osbourne said she loved the percussionist. Howard Stern stated “I had given-up hope. I was starting to get shaky…I’m new here and you looked like a hippie. This is why I’m here. You turned this whole theater into an instrument. Third judge Howie Mandel reacted, “You sir are a mother plucker!”

The second act was a young girl, Debbie Victor, who came out in a tutu skirt. Stern said “I look at you and think why did Piers Morgan give up this job?” After her less than impressive performance, Stern reacted with “I think, will you donate a kidney to Nick Cannon?” Nick came out onto the stage with her tutu on. There seemed to be an ongoing consistently high number of young contestants in Los Angeles this year. The next contestant was a six year old tap dancer, Lily.

When the fourth contestant came out onto the stage, he was a 23-year-old guitar player. Stern said, “this could make or break you. If you don’t do well you have to give him [Nick Cannon] your kidney. I can’t stand all the girls that come on to you.” The guitar player played and sang Adele’s “Someone Like You” song. He was rejected by Sharon and Howie. Stern reacted with “Sharon will see it my way. Howie too. They put through people with less talent. If I had a record company, I would back this guy”. Howie’s reaction was “It’s not a $1 million act”. The audience, who the show claims to be the fourth judge, yelled “another song”. The judges were indecisive.

The next contestant that performed was so bad that even the group of deaf audience members were holding up “x’s” at him. His act was followed by a singing mermaid, Amy Biff whose alter ego is “Kiki”. She kept saying “I’m gonna snap”. Act number six was a six year-old pianist. Stern said “I see a great future for you. Continue practicing…you’ll be a super star”.

The ninth act was the “School of Arts and Enterprise”. Next, a balloon guy came out and showed-off his Gary Dell’Abate balloon characterchure. The eleventh act was a group of six girls ages 11 to 21 whom were tap dancers/cloggers. Stern said “I am the guy that sits on the couch and fast forwards. I was mesmerized”.

When a rap singer followed with not such great reactions from judges, Cannon came out onto the stage and said “I’ve produced a few rap albums or two” in the contestant’s defense. The last two acts included a dancer couple and two women whom one was 85 years old, and the other 72 years old.

The new season of “America’s Got Talent” premiers on NBC Monday May 14th.