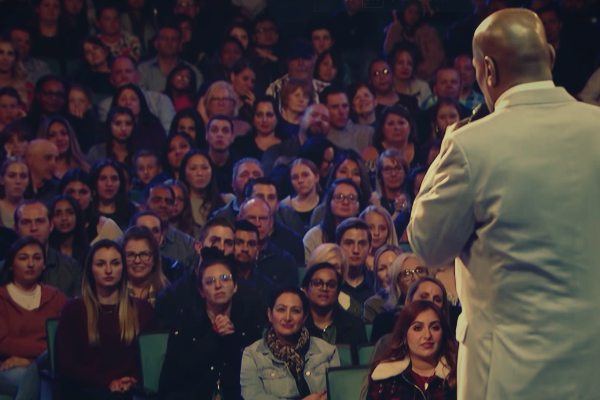 Back in March of 2020, a deadly virus known as Covid-19 caused everything, including entertainment to shut-down.  Socially distancing and mask-wearing became our new “normal.”  In the wake of it all, no shows with audiences were done in the studio, but rather from home.  Talk shows, late night TV,  “The Voice,” and “American Idol” conducted all communications with contestants and audiences from their homes.

Followed by a brief pause, shows that depend on audiences being part of their shows are slowly coming back as “normal” as they can.  NBC’s singing competition reality show “The Voice” just wrapped it’s first round of the Blind Auditions of new season 19 almost exactly as they have always done.  Except one major thing.  The audience was streamed into the background of the coaches virtually.  That’s right, approximately 100 audience members per show were able to tune-into sneak-peek the contestants’ performances (usually in-person inside the Universal Studios stage) via their web cameras from home, then virtually displayed behind the coaches.

Viewers at home will see “The Voice” coaches seated in their red chairs as always. What they won’t see is coaches going-up on stage to perform with artists, hugging, or high-fiving them after winning them over on their Teams. As for gifting their Team jackets to new contestants, coaches Kelly Clarkson and Gwen Stefani are doing so by pointing a launcher with the jackets inside that shoots the jackets onstage to the artists.

America’s favorite reality talent show “America’s Got Talent” current season 15 was disrupted by Covid-19 at the beginning of their filming during the show’s auditions phase.  The show managed to continue by airing it’s second round “Judge Cuts” from an empty studio lot with only the judges, host and a skeleton crew while streaming contestants onto a large screen.  Going into the Live Shows round, “America’s Got Talent” has announced that it too will be using a virtual audience.  We can only expect that it will be done in a similar way as “The Voice” with the coaches socially distanced and viewing the acts on stage just as before.  Except the audience will be projected virtually behind the judges, minus Simon Cowell who is recovering from a back injury.

We can expect more shows to pick-up and proceed into their filming in studio while socially distancing from guests and contestants while streaming-in a virtual audience.  Certainly not ideal for those whose talent feeds off of audience interaction.  But, definitely a temporary band aid in audience-based shows returning back to filming.

Some shows, such as game show “Mental Samurai” hosted by Rob Lowe have decided to proceed with filming in a different country altogether.  Contestant casting notices for the show stated that contestants would be expected to travel to Portugal at the end of August.  While other audience shows are bringing in folks under the conditions that they be part of a group consisting of friends and family who have been in quarantine together, then socially distancing the groups once arriving to the studio.

Another FOX game show “I Can See Your Voice” had casting notices go out for audiences for the show where audience members would be needed for one day’s work (paying $1140) of filming their “reaction shots” after being quarantined in a hotel and Covid tested a previous day. Based on the amount of payment, it seems that the show plans to get a full season of audience shots from one day’s work from the audience.

The notice for “I Can See Your Voice” also stated that audience members “will not see the actual show.” That means that “I Can See Your Voice” plans on shooting the show separate from the presence of an audience. In the game play, contestants have to guess good singers from bad ones without hearing them, based on how they lip-sync. It will be the shows first American season, adapted from original South Korean version. The show is hosted by “The Masked Singer” judge Ken Jeong, scheduled to air on FOX. Only one episode had completed filming before Covid-19. The series has since re-started back in August 2020.

The good news is that most game shows are traditionally set-up where contestants, celebrities and hosts are already socially distanced from each other. The only ones who aren’t is the audience. It seems that virtual audiences may be the best way for now to proceed with these types of shoots. Talk show “The Doctors” has also jumped on the virtual audience band wagon. Court shows, who also have audiences, are formulating a pandemic plan of action as they begin casting for litigants with plans to re-start filming.