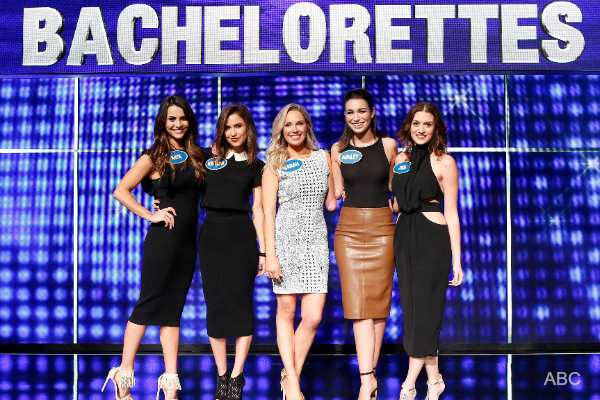 Two real-life couples playing are Shawn Booth and Kaitlyn Bristowe who got engaged from Kaitlyn’s Bachelorette season 11, and Tanner Tolbert and Jade Roper who got married after meeting on “Bachelor in Paradise”. 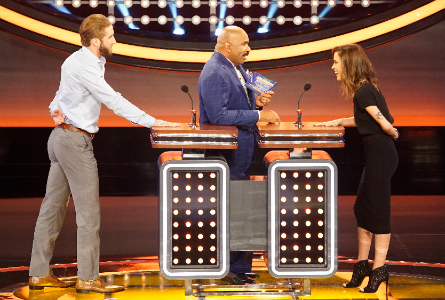 Host of “Celebrity Family Feud” Steve Harvey, called players Kaitlyn and Shawn up to the podium to compete for the most popular answer to this question – “name a children’s game that adults play in the bedroom.” Shawn was quick to hit his button to buzz-in. But, not quick to answer. He looked to his team mates for an answer. Just when the buzzer should have sounded-off to him running out of time, he managed to say “Twister”.

The answer “Twister” was number two on the board. Kaitlyn was annoyed and argued that the buzzer should have gone off because he took too long. But, then she ran out of time when she couldn’t give a better answer. Harvey asked Shawn if he wanted to pass or play. Kaitlyn told Shawn “pass it to your fiance.” Shawn ignored her and decided to play. Harvey reacted to Shawn’s decision, “just as dumb as a door knob!” 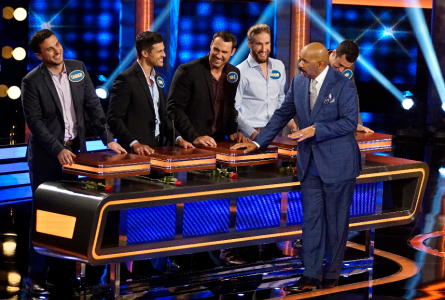 In the next preview, it was Ben Higgins vs. Andi Dorfman. Steve Harvey gave them – “we asked 100 women name something you have that’s large and luscious.” Ben quickly hit his button with “bra!” Andi immediately laughed at his answer thinking what Harvey said. Harvey told Ben “you don’t really mean bra. You’re really talking about what’s IN the bra!” It ended-up being the number one answer on the board under “Glistening Orbes”??? WHAT???

Update 8/2/2016 – “The Bachelorettes” won their game. Ashley I. and Andi played the Fast Money round. They both got a score of zero when answering the question “100 men named something they resent a woman telling them how to do.” Ashley answered with “hair”, and Andi answered with “sex”. The number one answered was “drive.”

This “Celebrity Family Feud” episode airs on Sunday, July 31 on ABC with also an episode of Indy Car Drivers vs. Sports Illustrated Models.