THE X FACTOR: Our Reviews Are In! 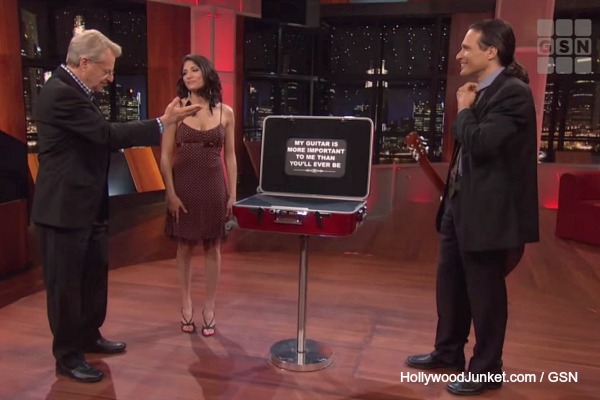 GSN’s dating game show called “Baggage” hosted by Jerry Springer returned to the cable network June 6 for a third season. The show is currently still in filming and we got a sneak-peek when we visited the set over the weekend on Saturday.

Springer keeps audiences guessing as he introduces each contestant with teasers of possible “baggage” or dirty laundry to be aired on the risque dating show- “We’ll find out next and a WHOLE lot more today on BAGGAGE!”

Audiences absolutely love Springer and he makes it a point to shake the whole front row’s hands each show taping and asks their names. 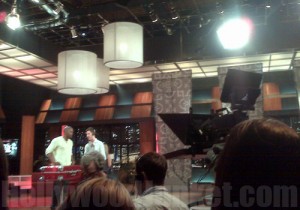 “Baggage” is a modern day game show similar to classic dating show “The Dating Game”. The surprising dirt that daters find out AFTER the date on “Love Connection” is what is exposed and made part of the game on “Baggage”. Each case opened on-stage reveals one bad thing after the next about the prospective datees that the dater or contestant has to choose from. The only prize that is won on the show, if the datee accepts the baggage of the contestants’ is winning a date. However, every person on the show receives $500 for playing along.

Most of the show is scripted. During one show, there was a female contestant who could not deliver her lines very convincingly. Springer agreed with the director in having her do another take as he said “she didn’t really commit to it”. On the sidelines behind the cameras stands either an assistant to the script supervisor (I’m guessing) or a producer who is coxing contestants on what to say and how to say it. If they mess-up , then they have to re-state their line. If it’s too complicated, their line is re-written. On Saturday, two difficult contestants were sent packing after the first round… coincidence, or show producers at work?

So far this season we’ve seen the following baggage: I sleep in my parents bed, I’m a celibate preacher’s daughter, I have not washed my workout gear in 15 years, I cheat when I travel out of state, I hoard spoiled food. Some of the large baggage contained: You would be a play thing for myself and my live-in boyfriend, I want to make love to myself, and My highest priority from a girlfriend is sex. Even more surprising is how these potential daters reacted to the baggage! We also witnessed a very memorable datee named Tasha who spoke funny, used awkward dance moves to attract men. Viewers won’t forget her!

“Baggage” is currently airing on GSN weeknights at 7:30 pm ET.