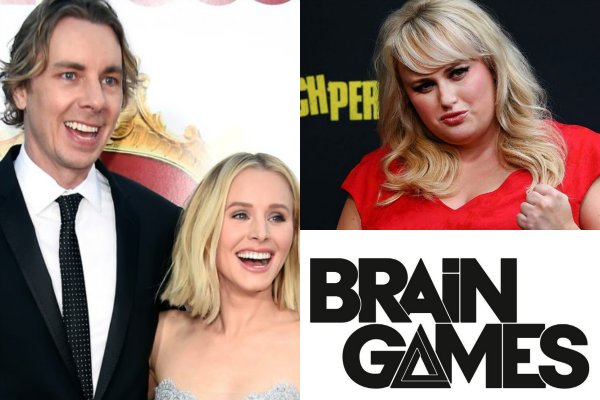 National Geographic channel enters its eigth season of educational show “Brain Games” which is in the style of a game show with life sized puzzles.  But, NOT quite a game show because no one wins any prizes.  Purely for entertainment value and competiton, this season in-studio guests include celebrities who join host Keegan Michael Key to challenge their brains in solving puzzles.

In one episode, it was a battle of the sexes where the studio audience was half women and half men.  The celebrity guests were married couple Kristen Bell and Dax Shepard (currently on “Bless This Mess”).  The couple’s motivation was to prove that their gender reigned supreme by performing given tasks.  Some of these tasks included: re-arranging a number puzzle in order; organizing the typical contents of an over-sized referigerator; and a race to deflat a large beach ball and fit it into a large box finishing it off by tieing a ribbon.  Sound like easy tasks?  Wait until you see how they were done.

Dax and Kristen also had to complete an obstacle course using their physical and mental capacities.  During commentary with host Key where they were speaking on the American stereotypes and traditions of husbands and wives.  Dax mentioned that sometimes, they are opposites of those stereotypes.  For instance, he claimed that Kristen makes more money than him and that doesn’t bother him.  He said he’d of course protect her first from the pyrotechnics on stage with his flame-resistant jacket over the host because after all, she’s his “growing money tree.” Lol! All the while, sweetheart couple Dax and Kristen made many PDA’s between and during filming.

Mentalist Lior Suchard was at the top of the show to freak-out Dax and Kristan by somehow, naming who their first ever crushes were!  One trick he used to do this was to have them state the full alphabet rapidly.  Not too long after that (as in a matter of seconds) Lior was able to accurately pen their first crushes!  Later, Lior did a mind trick with the audience where he influenced them, without them being aware, to according to gender, all draw the same thing.   About 90 percent of the male audience drew the same thing, and about 90 percent of the female audience drew the same thing.  Lior then revealed how they were influenced to do this.  Watch the video below of Lior’s apperance on “The Late Late Show with James Corden” in which he also did a similar trick with that audience.

Another fun example “Brain Games” showed of how differently the male and female brain works is when they had a group of men vs. women play a game of telephone that had them dressing real-life twins.  The group of men and women had to rely on each other to choose clothing options to recreate the orginal outfit.  Viewers will be surprised as well as highly entertained to see the outcome.

“Brain Games” integrates explanations of why the brains of genders operate the way that they do via experts in the fields of psychology and science.

Other celebrities announced to play “Brain Games” this season are Rebel Wilson, and Meghan Trainor.