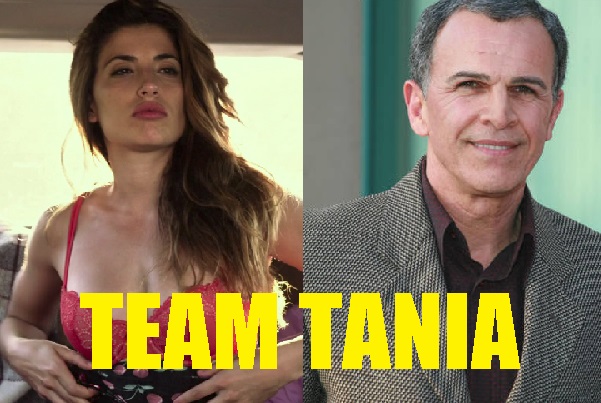 A new Lifetime movie about Jodi Arias, a convicted killer, is currently being filmed in Los Angeles. It’s a dramatic story with surprising and graphic details that has unraveled inside the American judicial system over the past four months and will be re-played out in the movie “Dirty Little Secret: The Jodi Arias Story” starring Tania Raymonde and Tony Plana, directed by Jace Alexander.

This week on the set, court room scenes were shot which were categorized as days five, one, two and three. Late in the filming of one of the days, a production assistant announced that day four had been dropped from the shooting schedule.

Most Challenging Part for Tania:
What appeared to be the most challenging part of filming for actress Raymonde was when she had to re-enact a scene where Arias is singing the Christmas carol, “O Night Divine” during a caroling contest inside of a women’s prison while fellow inmates look-on with enjoyment. Director Alexander told her that she was rushing it. “Take a deep breath, then ‘O Night’,” as he sings it to her. Several takes were shot while the camera zooms in on Raymonde’s final line – “O Night.” It is clear that Raymonde is very nervous during the filming of the scene, and a few times started the song on too high of a note. The background actors playing the inmates left the the room during the filming of her close-up.

The courtroom drama consisting of key points brought-up by prosecuting lawyer Juan Martinez , played by actor Tony Plana (Ugly Betty). Real-life lines were either re-enacted verbatim, while others were improvised or shortened.

In contrast to some of her past sexy roles (Texas Chainsaw 3D, Wild Cherry), best known for “Lost”, Raymonde appears to have gained a few pounds to play Jodi Arieas, and plays-down her looks by wearing a brunette wig, and glasses as per Jodi’s looks. She transforms beautifully into the role as the quite, demure Jodi Arias on the witness stand. Yet, I’m sure, intertwining her sexiness into the role in other scenes to re-enact the sexual relationship that Jodi had with her boyfriend and victim Travis.

The Killer:
One factual court room dialogue that was played-out exact was when Jodi was asked, “Did you kill Travis Alexander?” by defense attorney Kirk Nurmi. This was replaced in the movie as being asked by her other lawyer, Jennifer Willmott. We are guessing maybe because the actor that was hired for the day to play Kirk Nurmi had no lines written into his contract. Jodi responded, “Yes,” then, turning to look at the jury. “Why? The simple answer is that he attacked me and I defended myself,” she said. This is followed by some mumbling reactions among the audience watching the trial in the court room.

Broken Finger:
In regards to Jodi’s accusation that Alexander broke her finger, Martinez asks Jodi “If your finger was broken in January, how is it that your finger looks perfectly fine in this photo taken in May” as he points to a photo on a television screen in the court room. She responds that her finger is crooked. Two versions of the scene was shot. One where Raymonde is holding-up her fingers while trying to make one appear crooked, and another take where she is looking at the television while answering the question. Martinez then attacks her with another rhetorical question, “Isn’t it true that you broke your finger while you were killing Mr. Alexander? 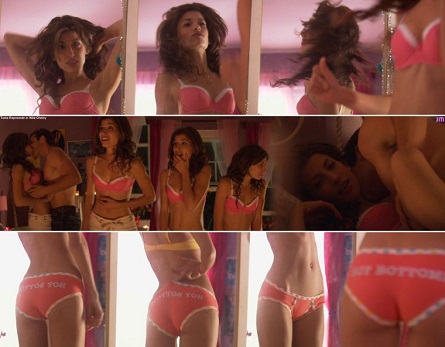 Pictured: Actress Tania Raymonde has in common with Jodi – marked underwear from a past role.

Sex Tape:
In a sarcastic tone, Martinez addresses Jodi’s claim of abuse and being treated like a prostitute by Alexander by saying “We can see that you did not like having sexual relations with Mr. Alexander” as a video is played for the courtroom. A video was not actually played during the filming of this scene.

Marinez asked, “Did you mention anything about his deviant behavior in your personal diary or 82,000 text messages to him?” Jodi responded, “I didn’t call it deviant, you did. But, no.” Actress Raymonde improvised this line in the second take, and the director liked it so much, he asked her to repeat it each time. 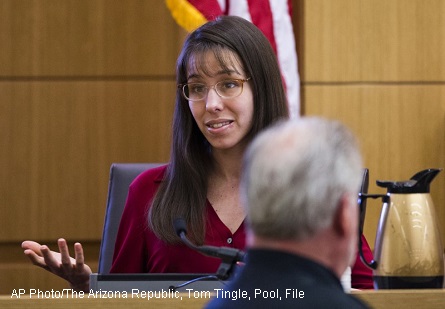 Pictured: Jodi Arias during her trial.

Like a Linebacker:
While addressing Jodi’s accusation that she killed Alexander in self-defense while he was attacking her, Martinez yelled a Jodi, in disbelief , “Can you show us how Travis LUNGED at you? Jodi then comes around the witness stand to display how the victim lunged. She said, “He came at me like a linebacker (as she lunges down and extends both arms out) is the only way I can describe it.”

The Trouble with Sitting (out-take):
The funniest moment during the court-room filming of the day came when director Jace Alexander told the actress playing the judge, who, by the way, had an uncanny resemblance to the real-life judge, to strike he gavel two times then sit. She first sat-down during her second strike. Then she sat down too long after the strike. The director told her the timing was too slow. Then, she sat-down at lighting speed after the gavel strike. The director then called-out, “Just sit down like a normal human being!” Held-back laughter was shared amongst crew and cast.