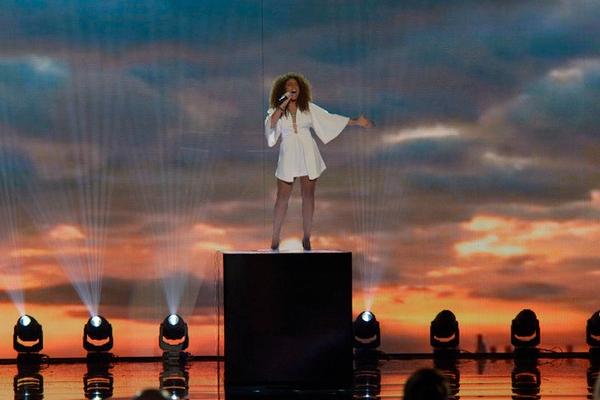 After they were done performing, the judges gave them a standing ovation. Mel B. told them that’s the way to open a show!

Howard said the first three acts have been so amazing and what Vita does “is so precise” and said she is wonderful. Heidi said it was Vita’s “best performance” and compared her to a super-hero. Mel B. said she worries she’ll be forgotten about from not having enough “wow factor”. Howie said all his comments “are a little pervy”. He loves watching her!

The young male singers of “Triple Threat” performed Destiny’s Child song “Say My Name”. Howard, Mel B. and Howie gave them X’s. Heidi said it wasn’t buzzer worthy because it takes a lot of guts to sing a Destiny’s Child song. Howard said they were “off” and were misguided. “It seemed like a parody of a boy band” he said. Mel B. said that song was one of her favorites but accused them of “butchering it”, and they weren’t comfortable on stage. She called it “a risk not done well.” Howie said they buckled under the pressure.

Mel B. told them they had a lot of repeated steps and they were better last time. Howie said he just likes them and America likes them because there’s something about them beyond what they’re watching. Howard said during Judge Cuts, it’s a repetitive act and doesn’t know if they’ll make it past tonight. Heidi was the only other judge (beside Howie) who liked them and told “The Gentlemen” that they have “big Apple swagger” and it looked like they were having fun.

Piff made Howie Mandel part of his act tonight against the backdrop of a Game Of Thrones look-alike throne. Howie had to guess which box hanging above him that did NOT contain Piff’s dog Mr. Piffles. Heidi called it “Game of Groan” and didn’t enjoy Mr. Piffles being captured in the box the whole time. She said he doesn’t need a big show. Mel B. liked half of the show. Howie said it was a great trick and “amazing” because he had noting to do with it. Howard said it wasn’t his strongest performance and he’s a comedian as well, and not to forget his other performances. Howard reminded everyone that he got the Golden Buzzer.

Keeping with the on-running food theme of his act, where he eats his lunch at the end, Piff had a delivery of take-out food delivered to him on-stage. Mel B. thought that was hilarious.

Howard said he was worried about Benton on the big stage with his guitar but he did a good job and “didn’t let the stage “swallow him up.” Heidi told him to keep doing what he’s doing because it’s working. Mel B. told him to focus and relax at the start of his performance. Howie said Benton ‘s wife felt it and Benton “brought it.”

They are a dance act. Howard said he loves their pure strength and “her sexiness”. Mel B. called it “a very interesting act” and enjoyed it. Heidi said they couldn’t have done it any better. Howie said what they do, they do very well, but will it inspire voters to vote?

Drew suffers from stuttering, but didn’t let it stop him from performing stand-up comedy routines. He was Howie’s Golden Buzzer act. Howie said he feels a connection to Drew and called him “a symbol and an inspiration”. He said he wishes he could be as good as him. Mel B. said Drew hasn’t given himself enough credit and is “bloody funny.” Howard said he couldn’t believe Drew picked stand-up comedy as a career – he’s an excellent writer and an inspiration. Heidi thought Drew is unique because he works the stuttering into the act and loves when he laughs at his own jokes.

All four men of “Show Project” have all been to the Olympics. They’ve created something new, just for Radio City Music Hall. Heidi complimented them and said she loves their outfits, especially their tops (they were shirtless)! Mel B. called-out that they were not always 100% in-sync. Howie said they bring an edge and hipness to gymnastics. Howard said as great and tremendous as they are, will the people recognize them as athletes or, as an act that they’d pay to see.

Paul performed what was possibly the best act of the night with his puppet! His argument with the puppet lead to him walking off the stage to leave the puppet there alone. Then, the puppet became animated! He asked if Howard had been drinking. Howard responded “absolutely not.” He said, “then why are you talking to a puppet?” Howard told Paul was the best act of the night, and “walking off the stage was GENIUS”. Heidi said although she likes traditional ventriloquism, (followed by ‘boos’ from the audience) he’s the best ventriloquist she’s ever seen. Everyone loved Paul and the audience stood-up for him.

Mel B. responded to Samantha’s booming voice with “you closed the show with even a bigger bang” and called her voice powerful and soulful.  Howie said she looks beautiful, sounds beautiful and she’s a star! Howard said it was her best performance yet.  She stepped-it up and well done.  Heidi called her a power-house and the best singer!