Cam Anthony had to say to his supporters that he's so appreciative and everyone has been patient since he's been at it for a long time.  Daly asked Jordan how...MORE

“The Voice” season 20 Top 9 Results show on Tuesday night, had fans saying goodbye to four of the artists.  Artists got to say words of appreciation to their coaches and the coaches (Blake Shelton, Kelly Clarkson, John Legend, Nick Jonas) got to say words of encouragement to their Teams.  The artists with the most votes from each Team went through and the ones with the least amount of votes performed for an “Instant Save” vote, voted by viewers.

Before that, host Carson Daly brought out the Teams one at a time to reveal the outcome of the votes, and asked the artists some questions. 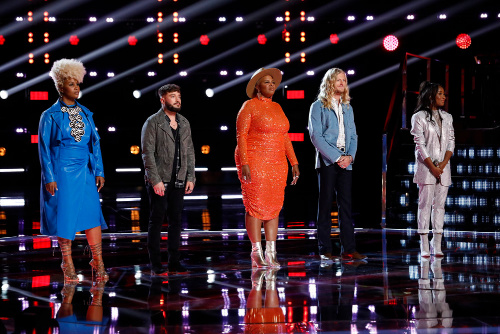 Corey Ward said what he learned from his coach Kelly Clarkson was to believe in himself.  Gihanna said that being on “The Voice” has given her more confidence and it’s okay to “not fit in a box.” She said she’s grateful “for learning that.”

The first artist announced as Saved from Team Kelly was Kenzie Wheeler.  Corey and Gihanna got to perform for the Instant Save vote.

The second finalist revealed was from Team Legend.  Host Carson Daly asked them some questions first.  Daly asked Pia how her late Mom has inspired her.  With tears, Pia answered, “thank you to my mother for teaching me to show up for myself against all odds.”  She said even in her absence, she’s still showing up for her.

Victor sang a Gospel song on Monday night.  Daly asked what he wants people to take away?  Victor said it’s about the message.  “I really want everyone to build their relationships with God.”

The artist from Team Legend advancing to the Finale next week was – Victor Solomon.  Pia had to perform in the Instant Save round.

After the commercial break, Season 17 winner Jake Hoot returned to “The Voice” stage to perform with former coach Kelly Clarkson. 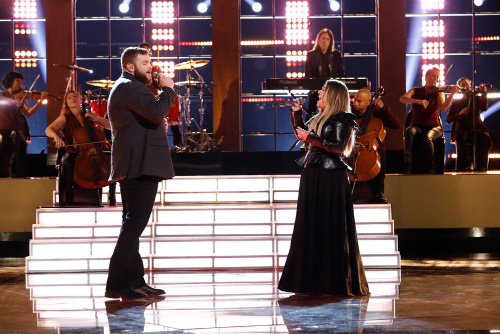 The third finalist came from Team Nick.  Daly asked about Rachel Mac’s message last night to viewers.”  She answered that she wants young viewers to know that, “Your emotions are real and valid.  But, they don’t define you. I am someone who got through it.”  Dana Monique said everything she does is coming from her heart.  “I’m a mother and I’m a dreamer.”

The third finalist was Rachel Mac from Team Nick.  Nick brought a mock award for “Best Host” (written on a post-it note) for the Billboard Awards, which, the other coaches pointed-out, hasn’t happened yet!  It was a skit to remind people that he’s hosting the Billboards this year.

Team Blake artists Cam Anthony and Jordan Matthew Young came out onto the stage next to hear their fate.  Cam Anthony had to say to his supporters that he’s so appreciative and everyone has been patient since he’s been at it for a long time.  Daly asked Jordan how his Dad shaped him as an artist?  He said all of his family influenced him from hard rock to Country, and his life experience has shaped him as an artist.

The artist on Team Blake with the most votes was – Cam Anthony!  Jordan had to perform for the Instant Save.

Pia Renee sang “Everything I Wanted” for her Instant Save song.  John Legend reacted that he loved how she displayed a “different part of her artistry, and loved her “rich bravado…so rich, so soulful.”

Corey Ward sang “Iris” for his Instant Save song.  Kelly reacted that Corey picks “great songs: and she can’t wait to hear his album.  She loves the Counting Crows vibes.  “tender and sweet in his falsettos.

Dana Monique from Team Nick performed next.  Nick said Dana has been so “brilliant” shown up for every performance and has brought her “A-Game” and she’s one of the best vocalists he’s ever heard on the show. 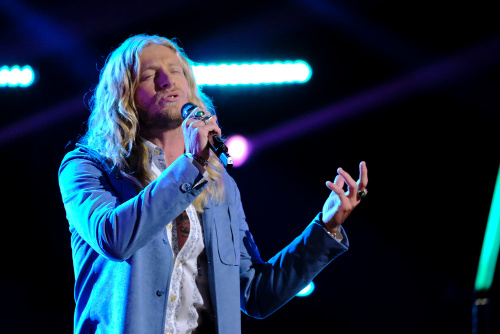 From Team Blake, Jordan Matthew Young sang “Drift Away ” song.   Blake said ever since he auditioned for the show, he thought Jordan was born for the wrong decade. What’s cool about that is Jordan brings that in his sound.  “You don’t make it current, you make it then.”  Blake said “I need this man in my life for one more week!”

Gihanna Zoe was the last to perform for the Instant Save.  She sang “Someone You Loved” by Lewis Capaldi.  Kelly reacted, “that was amazing!”  She said Ghianna intrigues her because she goes places with her voice that she doesn’t expect.  “The fluidity of your voice, you are not 17,” stated Kelly, and added that  it’s crazy and how gifted Gihanna is.

Pia told John Legend “thank you for your vote of confidence.” She thanked him for choosing him.  Pia thanked vocal coach Trulani Rose.  John said he didn’t choose her, she chose herself by making her talent undeniable.  Corey thanked Kelly and said she’s the same all the time.  He also said words will never express how much he’s grateful.  Kelly said she was holding Corey to his promise that he was going to sing “Gone with Me” on her talk show.  She said Corey is her sister’s favorite.  She hoped that one of her artists would make it through.

Dana told Nick that she was so glad that he Saved her, and she enjoyed working with him and the other contestants that are like family.  “I’m glad that you let a Southern girl like myself show them what I got on stage, ” said Dana.   Jordan thanked Blake for letting him be himself. “I always felt like an underdog.  He said Blake let him do his thing like playing the slide guitar.  Jordan also thanked everyone behind the scenes.  Gihanna said she felt like she’s continued to be on an upward trajectory of growth and Kelly has felt like a second mom.

The artist who was Instant Saved was:  Jordan Matthew Young from Team Blake! 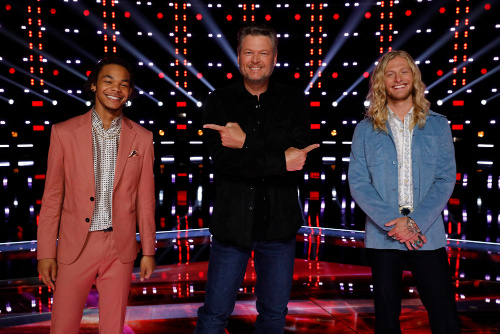