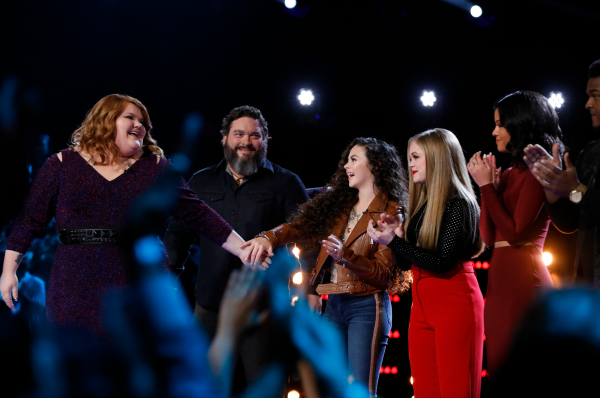 This week on NBC’s “The Voice” it was fan dedication week where fans got to choose a song for their favorite artists to sing. Some artists such as Sarah Grace, and Dave Fenley got to step slightly outside their genres. The Top 11 ‘Voice artists perfomed the most popular voted song choices for Monday’s performance show.

At the end of Tuesday’s Results show, only ten of the eleven artists who got the most of America’s votes went through to next week’s ‘Voice show to give viewers the Top 10. There were a few stellar, stand-out performances on Monday’s episode by artists such as- Kymberli Joye, Chevel Shepherd, Dave Fenley, and Reagan Strange where it was certain they’d get through to next week’s show.

The fans chose a song that represented his “soulful sound.” Dave beatboxed during his rehearsal this week at Blake’s request. Blake reacted “The Voice” has never had a beatboxer on the show.

After Dave’s performance, Adam said it makes him happy to see Dave “seemingly” do whatever he wants. Blake said they’re always waiting for an artist to have “that moment.” Then reassured Dave, “you just had that dude.”

After Chevel’s performance, Kelly told her “you nailed it baby girl!” She added that Chevel is so good at story-telling. “You told the story. Good job!”

Reagan was given the song “Complicated” by Avril Lavigne. Adam said it’s a difficult song that requires “chops.” He noted that Avril Lavigne was the same age as Reagan when she came out with the song. He advised Reagan to not be too serious. “You definitely need a moment like this,” Adam told Reagan. He encouraged her that she sings it so beautifully that she definitely can’t mess it up.

After her Top 11 performance, Blake told Reagan that he’s glad they’re letting him talk since it’s “fan week” because he’s a fan of hers. “You sing perfectly” stated Blake. Adam said he absolutely adores Reagan and she continues to impress him every week. “You’re fourteen-years-old. I really believe you could win this thing” Adam said and she could be a “big influence” to others. 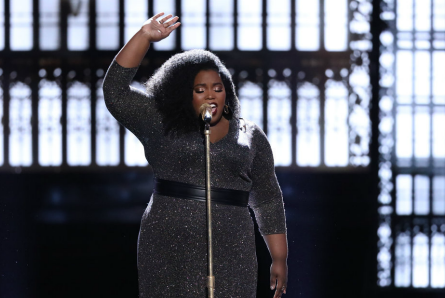 Kymberli’s song was “Break Every Chain.” Kelly advised her to set into a bit of a higher head voice. Kymberli said it’s a song about chains of fear, chains of anxiety.

After her stellar performance, Jennifer reacted to Kymberli that she opened the doors of the church in here! Kelly stated that the fact Kymberli can just blow things away. “It’s so beautiful. You love Gospel music and that’s what you do” Kelly told Kymberli.

Kirk got Sam Hunt song “Body Like a Backroad.” Blake said Kirk is more of the progressive Pop style Country, and this is an up-tempo song which is a change for Kirk. Viewers haven’t seen that side of Kirk yet, noted Blake. Singer Richie McDonald called Kirk to praise him for his peformance of his song “I’m Already There” last week by his band Lonestar. Kirk told him he’d love to work with Lonestar.

After Kirk’s performance, Blake reacted “what the hell are you doing up there…you’re incredible!” Blake continued the compliment by saying Kirk is a blend of Rascal Flatts and George Strait.

Chris is from Barron, Wisconsin who has given him major support during his time on “The Voice.” He’s part of a Southern Rock group that plays for the troops overseas. The troops gave him a shout-out on the show. Chris got the song “Long Train Running” by the Doobie Brothers. Blake told Chris that his voice lends itself to that song and with the changing face of Country music, that 70’s influence is coming back.

Blake reacted “that was incredible. You can see Barron from space right now!” Blake ended by saying Chris keeps getting better.

Lynnea was given the song “Consequences” by Camila Cabello. Kelly’s hope is that people are captivated by Lynnea’s vulnerability. Lynnea said her mom who’s currently in prison has the whole prison rooting for her on “The Voice.”

Jennifer reacted to Lynnea’s performance – “you surprise me every time.” She said Lynnea looks and sounds like a star and she raises the bar every time. Kelly told her she’s proud that Lynnea’s had this moment and to take every opportunity.

Makenzie has an R&B acoustic vibe and the song her fans chose was Destiny’s Child “Emotion.” In the Hollywood Junket interview with Makenzie, she said it’s a song that she’s performed numerous times before and was totally comfortable performing it on “The Voice”. Watch her interview below:

Coach Jennifer Hudson said Makenzie is staying true to who she is. Makenzie reacted to the fan song choice as it’s “super validating that the fans know who I want to be as an artist.” After her performance, Jennifer told Makenzie “you are so skilled.” And said it’s like Destiny’s Child with the Bee Gees and her voice is “like butter.”

Blues singer Sarah Grace from Houston, Texas got “Dog Days Are Over” song. Blake’s reaction to Sarah’s performance was he loves seeing her step out from the piano and perform like that. Coach Kelly said she wouldn’t have given Sarah that song. But, it was the best moment. Sarah is just barely 16-years-old and such a smart singer to be so young.

DeAndre is a soul singer from Texas. He said he didn’t believe in himself at one point. Adam said with the fan’s song choice, he can go “full DeAndre!” The song was “Cry For You” by Jodeci. Adam said “it’s badass” and advised DeAndre to do it sultry. It paints the perfect picture of who DeAndre is as a singer. Adam said it’s “DeAndre’s spirit.”

After his performance, Jennifer said it took her back to those days at a Jodeci concert. She asked what Adam knows about that! Adam said DeAndre did a song that everyone wanted to hear. It’s such “an incredible time for music…I believe you have ALL the elements” Adam told DeAndre. 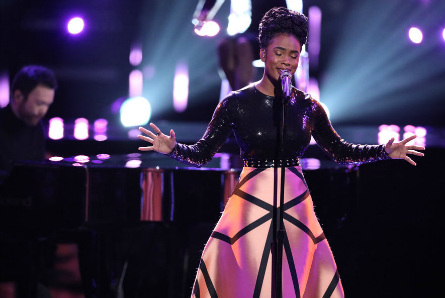 Kennedy, who’s in the eighth grade, finished-off the Top 11 performances for the night. She sang “Greatest Love of All” by Whitney Houston at the request of her fans. Jennifer said Kennedy has this natural ability of caressing notes like Whitney. After her performance, Jennifer told her she’s so proud of Kennedy. She added that Whitney is proud of her “up there” and “we’ll see your name in lights.”

Tonight’s “The Voice” show announced America’s Top 10 artists. No time was wasted as host Carson Daly got down to business right away by announcing the first results within minutes of the show’s opening.

The first two artists revealed as Saved were KENNEDY HOLMES (Team JHUD) who is the youngest in the compeition at 13-years-old, and KYMBERLI JOYE (Team Kelly).

Daly announced the next artists who were Saved by America’s votes. Daly addressed Kirk regarding Country fans. Kirk stated “this is my destiny. This is my calling.” Then Daly asked Makenzie about not making it onto the show last season. Makenzie advised other contenders to “be consistent” and “take all the advice you can get and use it to your advantage.” Artists announced as Saved were: REAGAN STRANGE (Team Adam), CHRIS KROEZE (Team Blake). That left seven artists waiting to hear their fates.

Daly asked Chevel what she wants fans to know about her. She answered not long ago she was back at home, at school. Now, she’s on “The Voice” and encouraged other young people to follow their dreams and not to give up. Daly aksed Dave Fenley what other sides does he want to show America. Dave joked his “back side!” Seriously, he said he wants to “move people” through his music. 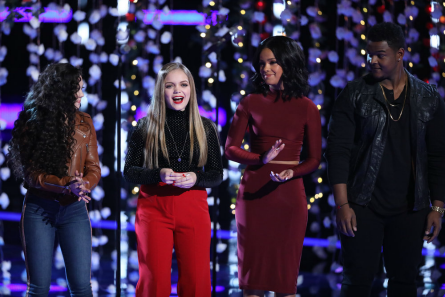 Next, the artist announced as Saved was KIRK JAY (Team Blake). MAKENZIE THOMAS (Team JHud) was also announced as saved. That made ALL of Team JHud as saved!

The remaning artists came back onto the stage. DeAndre stated that his community has gone above and beyond to show their support along with his parents. Daly asked about Sarah Grace’s fan song. She said it was a different side to her artistry and has been working on her original music which sounds like that.

The last three artists to be saved by America were: SARAH GRACE (Team Kelly), DAVE FENLEY (Team Blake) which made the entire Team Blake in the Top 10. CHEVEL SHEPHERD (Team Kelly) was the last artist to be Saved.

The Bottom Two: DeAndre Nico and Lynnea Moorer each performed an Instant Twitter Save song to compete for America’s votes.

Lynnea did a light-hearted performance of “Tattooed Heart.” After the performance, Kelly stated Lynnea “fights every week to be here” and thanked the viewers for keeping Lynnea on the show for this long. Then, DeAndre Nico gave a gospel-style performance of “Take Me to the King” song. This resulted in Jennifer Hudson throwing her shoe onto the stage at DeAndre.

Jennifer said DeAndre sang with a purpose. She felt every single word and “you deserve to stay in this competition.” Coach Adam asked the question to everyone – “does it feel right for this guy to go home?” The studio audience answered “No!” Adam stated that he was shocked for DeAndre to be in the bottom. “This is crazy!”

Lynnea thanked Kelly for making her “a fighter” and showing her everything she didn’t know about herself. Kelly told her she was already a fighter. DeAndre told Adam “thank you for everything” and for “being real.” He said Adam told his Team to “keep pushing” and to always be themselves. 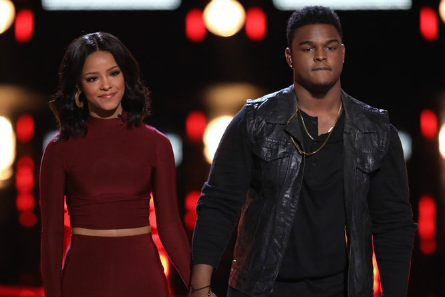 After the commercial break, the voting poll revealed 83% of the vote going to DeAndre, and 17% of the votes to Lynnea Moorer.

Kelly stated that Lynnea has been one of her favorite artists to work with because she has style that’s innate and a sound. Adam said he hopes that this is the moment that “everyone wakes up” to how talented DeAndre is. He said no one is more passionate than DeAndre. He is focused and does his best at “all times.” Adam labeled him as the most talented singer on the show. Adam encouraged DeAndre for this to not detour him from moving-forward whether or not it’s on “The Voice.”

“The Voice” airs Mondays and Tuesdays at 8/7 c pm on NBC. Next week the Top 10 will compete.