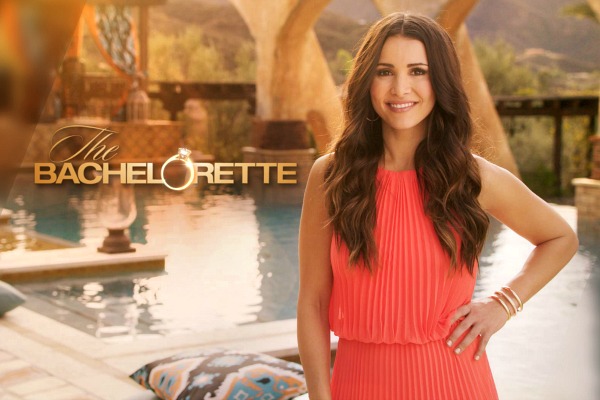 It’s down to the final three men for Andi Dorfman on “The Bachelorette” with the final two weeks left. Andi and the guys – Chris, Nick, and Josh, continue their journey this week in the Dominican Republic where they will go out on one-on-one private dates which may or may not end with a night in the Fantasy Suite.

JOSH, NICK, CHRIS RECAP:
Andi said she has ‘three great choices” with “three different paths” in front of her. Josh “is easy going” and say’s whatever is on this mind Andi said. Josh makes her feel over the moon and “gitty”. Their date before the hometown dates, Josh finally told her that he is in love with her. Josh is exactly the type of guy who has hurt Andi in the past. She admits that because of this she has kept her guard up.

Farmer Chris is also a serious contender. Andi said Chris is “the guy that takes me aside and steps-up.” Opposed to Josh, Chris told Andi early on that she is the one for him. Soon after that, he became Andi’s secret admirer and expressed his feelings for her through romantic love letters. During his hometown date, he took her for a ride on his tractor on his farm, then had a planed fly overhead with a flag that read “Chris Loves Andi”. Andi also discovered what a fantastic businessman Chris is also with his farm. “Chris is definitely the total package” she described his as he would be and amazing husband and father.

Andi has a mental connection with Nick. She gave him the “first impression rose” on night one of the cocktail party. Andi said Nick is sweet and affectionate. Nick told Andi that his is falling in love early on as well. Andi said that her and Nick have “a mental connection,” and that he has a passionate side to him. For most of the season, Nick had the house of men, including Josh and Chris, angry at him for seeming like he was “playing the game” on “The Bachelorette” show and constantly strategizing his every move with Andi. They don’t believe that he is there for the right reasons. But clearly, he has Andi swooning over him.

NICK AND ANDI DATE:
The first overnight date of the night that Andi had was with Nick! Big surprise there! They started their date with a helicopter ride over the beautiful clear blue waters of Saona Island . Andi said it was “sexy” and that “Nick has a body on him” as she checked-out his shirtless body. Andi said they had a connection and chemistry, however she realizes how much she doesn’t know about Nick and questions him about his previous break-up.

Nick presented a cartoon book of the story about him and Andi and when they met the first night, followed by a cartoonish version of all of their dates. Andi loved it and couldn’t stop smiling as he read to her. The story ended with Nick having to tell Andi that he lover here, followed by a lot of blank pages. Nick broke down and told Andi that he loves her “so much” during their intense make-out session against a tree.

JOSH AND ANDI DATE:
Andi’s date with Josh was next. They enjoyed the local scenery and went shopping at local street vendors. Andi said she feels “young and vibrant” when she’s with Josh and thinks “it’s hot” when he speaks Spanish and takes control. There’s “no filter” on Josh Andi says is one of the things she likes about Josh. Andi noticed how good and natural Josh is with kids and she loved it. Josh said he is beyond in love with Andi and feels good about it. However, because of “The Bachelorette” rules, Andi can not express how she truly feels about Josh nor any of the men yet.

Josh recounted his first night at the house and worried that Andi would think that he was “too cocky”. But she said she thought he was goofy. After their day of playing baseball with some of the local kids, he said he loves being around kids and helping them. They then discussed what type of parents they’d be. Hmm….it’s starting to sound really serious between these two!

Andi said that Josh is always happy, and seemed a little curious about it. Josh said “life is great” and with her, it’s great. Andi said that she does know that when Josh tells her he loves her, he means it. Josh and Andi decided to go to the Fantasy Suite to finish-off the date During their walk, fireworks started to go off. They took a dip in the pool where they made-out.

CHRIS AND ANDI’S DATE:
Andi’s next and last date was with Chris. She reflected on that she doesn’t feel that her and Chris’ relationship has progressed to have an over-night date yet. So, this date will determine that. Chis said he hopes Andi “continues to fall in love with me.” They started off their date by going on a horse ride. Andi’s horse started to get a little fussy, which freaked-out Andi. Chris stayed calm, cool and collected. After the horse ride, and the arrived safely to a beautiful field, Andi told Chris that his family was the best family she met. They decided to play Chris’ family game in the field where she had to find him as he hid in the tall grass, but not very well. She found him right away, and that’s what he wanted. He scooped Andi up in his arms and carried her away. Chris said there’s no question that he’s in love with Andi.

BUMP IN THE ROAD!
Andi told Chris that “there’s a struggle” for her and that basically she’ not ready to spend the night with him in the Fantasy Suite. He wasn’t completely understanding her So Andi broke it down for him “I don’t see the foundation with us” and that she doesn’t see herself in Iowa. She also told Chris that her feelings were not “there yet” in the same place were his are. Poor Chris! Sounds like Andi was trying to let him down easy, but then she ended-up having to be straight forward with him since he wasn’t getting the clues.

By the end of their date, it proved to be where Andi’s feelings did not increase with Chris like she had hoped. There was no Fantasy Suite at the end of Chris’ and Andi’s date and she was more upset than he was. As she was crying her eyes out, Chris said, “I just want to go home” and “It wasn’t meant to be.” After Chris left Andi, he said he didn’t see it coming and that “it hurts.” He said “it wasn’t the answer that I wanted” and that he didn’t “come here to mess around”. His goal is to find his partner in life and that Andi was “damn close to being it”. He rode away wondering what happened and left with questions.

Andi said sending Chris home was really tough. She met with host Chris Harrison. Harrison asked her how her week was. Andi said the only “little bump in the rode” was Chris. Harrison asked her if it was about the location of Iowa of why she sent Chris home. Andi said she realized that when he told her that he loved her, that the foundation just wasn’t there and that the Fantasy Suite wasn’t going to change anything. This was the second time Andi encountered a Fantasy Suite let-down and disaster. The first one, how could we forget, was with “The Bachelor” Juan Pablo when he spent the night with Andi just talking about himself.

FINAL ROSE CEREMONY:
Andi said that the fear is that she’s going through all of this and that it might not all end in a “happy moment”. They two guys left – Josh and Nick, still have to accept that rose! Josh said he’s ready to spend the rest of his life with Andi. Both Josh and Nick stood side-by-side as Chris Harrison announced that even though Chris is gone that there will still be a rose ceremony. There were two roses and two men. Andi said she wanted to make sure they still wanted to accept her roses. They both said “yes”. It was the last rose ceremony.

NEXT EPISODE: Josh and Nick will meet Andi’s family. In two weeks, Andi will decide between either Josh or Nick during a live show.
NEXT WEEK: It’s “The Bachelorette: The Men Tell All”.  There will be some truths told from Marcus, and Andrew.   Then Chris has some questions from Andi and wonders if he should have done things differently.