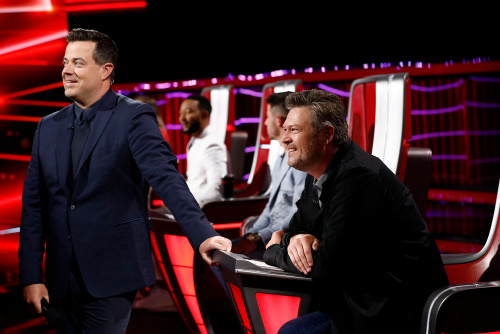 “The Voice” gave an unforgettable season 20 live finale performance show.  The longest standing coach on the show, Country singer Blake Shelton, got a tribute for his ten years on the show.  This included an introduction from his soon-to-be-wife Gwen Stefani whom he met on the show.  In Blake’s bragging about winning the most ‘Voice trophies, he called the other coaches “extras”!  In host Carson Daly’s observation of Blake possibly getting another win,  this didn’t sit too well with the other coaches as the yelled back about the unfair “propaganda.”

The night was full of other surprises that came in the artists’ performances.  Cam surprised everyone with a song unique to his genre and style.  Rocker Jordan Matthew Young did the same by singing a Pop song as a Country song.  Then, Team Legend’s Victor Solomon commanded the attention from all when he gave an explosive closing performance of the night.

On Monday’s finale show, Blake Shelton performed his single, “Minimum Wage.”  The artists from each Team performed twice.  One dedication song, then an uptempo song that showcased who they are as artists.  Team Kelly kicked it off with Kenzie Wheeler.

Kenzie said he didn’t expect to make it this far.  Kelly called it the “best Block ever!”  She Blocked Blake Shelton from turning for Kenzie.  Kelly said she still feels bad about it because Kenzie is a big Blake Shelton fan.   Kelly chose a George Strait song for Kenzie to sing because she said he reminds her of George Strait and it’s one of his favorite artists.Kelly said the whole performance is about energy and vibe and wants everyone to feel like they’re at a Honky Tonk.

Coaches Reactions:  Blake said “I thought it was really good” and he liked the modulation in the middle.  He said that song is from that movie “Pure Country” and liked that he’s teaching Kelly something about Country.  Kelly loved all the cowboy hats and the dancing, referring to the Country dancers on stage.

Victor dedicated his song to Ciarra, his girlfriend whom he met on Twitter.  Victor read a love letter to Ciarra out-loud before his performance.

Coaches’ Reactions:  Nick said he loved Victor’s dedication “it was beautiful.”  Nick revealed that he met his wife on Twitter.  Nick added, “you are so creative vocally.”  He said to take it and make it his own like this was a phenomenal performance.  John said he loved how much personality and soul, and how much artistry.  “I loved the dedication and passion.”

Jordan said he was more moved by the feeling than the words in the Black Crows song.  Jordan’s first performance on the night was “Key to the Highway” song by Eric Clapton and B.B. King. Blake said Jordan deserves to be on the voice wit all the genres he does and lives and dies with that guitar in his hands.

Coaches’ Reactions: John said he loves what Jordan brings to the show 0 “a diff energy than anyone else on the show.  A different genre.” He said Jordan is “killing it in every way.”  Coach Blake reacted, “Jordan, thank you for rocking.”  He said how much do we need this guy not only o this season, but every season.  He’s destroying it on stage with his slide guitar, said Blake.

Rachel dedicated her song to her brother.  She said when she was a baby, her dad sang this song for her.  She hopes he dances to the song when he’s feeling down.  The song was “I Hope You Dance” by Lee Ann Womack.

Coaches’ Reactions:  Kelly said she’s 16 and amazing doing this.  Nick said 16, one chair turn and just gave one of her best performances.  “You have so much depth..you work so hard” and he added that he’s watching her grow into a “super-star.”

Blake reacted “that was awesome.  it’s hard to take it all in right now” but said he’ll watch it again later.  Blake said he was purposely blocking  memories of Adam out of the recap montage, Lol! He said all of those artists are doing great and playing music for a living.  Carson stated that if Blake wins tomorrow night, that would be his eighth win – almost half of his time on the show.  Blake said it would be unbelievable if he won again tomorrow night.  The other coaches were upset by this “propaganda.”  Blake teased that the other coaches are “extras…supporting roles” on the show. 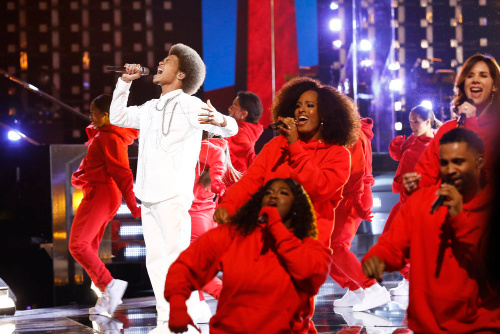 Cam got inspiration from American writer, Napoleon Hill.  He read a written work.  He said “it’s time for me to let go of the fear and believe in my faith.”   Coaches Reactions:   John reacted  “you are so ready for this stage.  You are ready for any stage you want to be on. ” He said Cam has a “God given talent” and professionalism, and “all of the things you need to be a superstar artist, you really have all of it.”  John called it a “blessing” for all of them.

Cam told John that he looks up to John Legend when he does things like this.  Coach Blake reacted, “it’s too bad that Nick took the opportunity” away from John to coach Cam.   In all seriousness, Blake said in 20 seasons, “God put this man in my life that may change everything for the show.” Blake said the only  thing bigger than Cam’s talent is his heart and his mind, “and you just saw it there on the stage.”

Kenzie teared up while reading his dedication letter to his hometown of Dover in Florida.   Kenzie got choked-up as he read special moments he experienced in his hometown and not knowing how much he’d miss it until he left.

Coaches’ Reactions: Nick reacted that he didn’t know Kenzie had that upper register that he showcased tonight.  He said the entire performance was special. And “those roots are important” and he made a lot of people in Florida proud.   Kelly said Kenzie has no idea how gifted he is and he almost surprises himself in rehearsals.  She said he nails those bigger notes that he goes for.  “It’s so effortless….so natural for you,” Kelly told him. 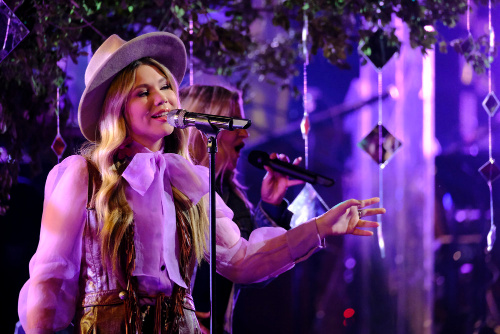 Rachel is a one-chair-turn, the only female in the finale,  and the youngest in the competition,  Rachel sang “The Chain” by Fleetwood Mac.  Nick told Rachel to try to have as much fun as possible.  Rachel said working with Nick feels more like a collaboration.  Nick said the goal for her finale performance is to get every coach on their feet.

Coaches’ Reaction:  John said it was so much fun to watch and loved how she rocked out.  Her high notes were so strong and powerful. The song was so much of a journey and dynamic to it and she nailed it.  Nick said “We’re the luckiest people in the world to get to watch these performances.”  He also added that Rachel just added another layer to that performance.

He dedicated the song “Stay” by Rihanna to his grandmas Joy  and Betty.  Some of his favorite memories are spending time in the garden with Grandma Betty.  Joy is the most artistic person he’s known.  Jordan talked about the passing-away of both of his grandmothers.  He said the song evokes those deep feelings he feels for them both and he never got to say goodbye.  Jordan said they shaped him how he is today.  They taught him that being unique is really a special gift.

Coaches’ Reaction: Nick said Jordan is “so good” and he’s so excited to buy his record.  He has a lot of depth and soul to share.  He said Jordan “can do it all.  That performance was top notch.”  Blake said Jordan will send him the first free copy of his first album.  Blake said Jordan slapped American on both sides of the face because they never know where he’s coming from musically.  Now he’s slapped them in the ear because here’s a completely different layer of Jordan that no one has heard before.  “It’s all great,”  and he’s doing the unexpected, Blake finished.

Cam chose the “Wanted Dead or Alive” song by Bon Jovi.  Blake was surprised by Cam’s choice.  Cam said, this song is “a celebration of my time at the show.’ He said this song was the one his family would always choose on “Rock Band.”  Cam said his entire family would rock out to this song.  Blake said even with this being an outlaw song, Cam’s heart still comes through.

Coaches’ Reaction:  Kelly was so surprised by the song.  She said he is a unique talent that can not only conquer the music industry, but any art form.  Kelly also said Cam’s heart bleeds through in that performance.  Coach Blake said all three of the coaches were like, is that really what he’s singing?  Blake said there are people born with talent and there are people born with whatever it is he’s born with.  “We don’t see it that often…Cam, you’re a star.” 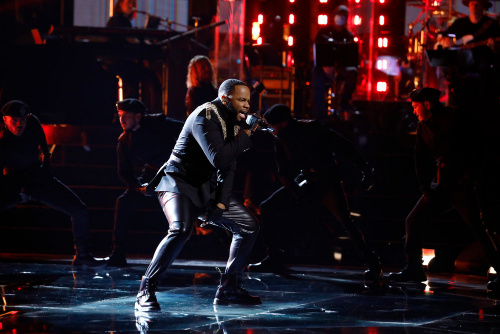 Victor is Team Legend’s soul singer from Illinois.  John said Victor came and “knocked it out of the park” when he sang John’s song “Glory” for his Blind Audition.  Smokey Robinson Tweeted Victor after he sang his song on the show.  John said he didn’t know that and was impressed.   For his finale song and closing song of the show, Victor sang Beyonce’s song “Freedom”  John said Victor started with “Glory” in his Blinds, and ended with “Freedom.”  Victor said the song is a great representation of “who I am as an artist,” to present a message and encouragement.

Coaches’ Reactions:  Kelly said that was freakin’ awesome and tell her when his tour starts and she’s there.  John called it the best performance he’s seen on the show! He’s never seen anything like it on “The Voice” stage.  John said Victor mastered it all in that performance.  “Incredible.  I am so proud of you Victor”  John said and told the viewers to vote for him so they can give Victor that “V trophy, it’s custom for him!!”