Back on Track THE BACHELOR Season 22 Premiere Recap 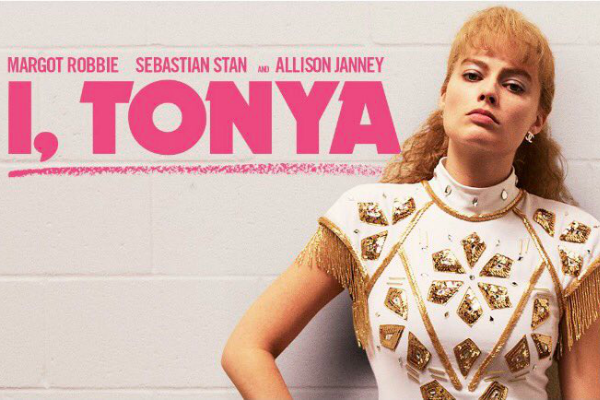 From the very first opening shots of “I, Tonya”, it is clear that this movie is unlike many others. Opening with a sequence of interviews from the main characters delvulging their take on the events to be recounted in this mockumentary style dark comedy, they state, these are “totally true interviews.” And, in fact, they are! Most of the inteviews are re-enacted word-for-word from real-life on-camera interviews and transcripts.

Directed by Craig Gillespie, “I, Tonya” is a passion project picked-up by it’s star Margot Robbie who produced the film under her production company LuckyChap Entertainment. In a Q&A session with the actress, cast members, and filmmakers of “I, Tonya,” Robbie stated that she had started the LuckyChap company to promote more opportunities in films for women.

During the Q&A, Robbie stated, “reading this script was was not only the most original, there were also a number of incredible female leads (characters).” The script broke every rule and had a rebellious nature. Robbie said she didn’t know that the story was true at first (Robbie was four-years-old when it happened).

Tonya Harding, who introduced herself in the movie as a matter-of-fact way, “growing-up poor or being a redneck which is what I am.” She was, in fact, the first U.S. woman to land a triple axle. But, unfortunately, had a tumultuous relationship with the Olympic judges which is also depicted in this fact-based moive. Because there are only three women in the world who can land a triple-axel, Harding being one, director Gillespie said they used CGI to bring the stunt to screen.

“I, Tonya” is based on the true-life events of Olympian ice-skater Tonya Harding of what drove her to conspire against her lead opponent at the time, Nancy Kerrigan. Set-up in a mockumentary with a splash of real-life like interviews, “I, Tonya” is reminiscent of another film that was released in 1995 (ironically, one year before the real life Harding and Kerrigan incident) “To Die For” which starred Nicole Kidman and Matt Dillon, also based on a true story.

Unique in itself, “I, Tonya” as stated by its director, is a movie that breaks the fourth wall – all the characters are very rebellious. “I wanted the script to mirror that.” In that, audiences see the characters addressing things like the script, the cameras and are very aware of the filming of the movie, which is done in a documentary style. Also, as a viewer, it’s refreshing when the characters, who are clearly aware that they are playing real-life people, turn to the camera to confirm scenes that they are acting-out by stating “this really happened.” Okay! Great! I was wondering that!

Similar to other movies like it, i.e. – “To Die For”, “Borat”, “Best in Show”, “This is Spinal Tap” – “I, Tonya”, while a very entertaining film, has it’s flaws. One of which is having star Margot Robbie also play her Tonya character as a teenager. Sorry, it just wasn’t believeable. Unless it was part of the gag. Also, distracting and unbelieveable was having the same actor play Jeff Gillooly, Harding’s boyfriend, as a 17-year-old, who actually looked like an older man she was dating. Again, maybe it was part of the movie’s many underlying jokes. Perhaps it’s their characters who are reflecting on the events, re-enacting themsleves in their own minds eyes.

Because I feel like I’ve seen this movie before with a combinatin of the actual events as they transpired and in movies like “To Die For”, “I, Tonya” was a bit of a let-down. But, for those who are too young to remember either of these, the movie will be quite an entertaining and original treat. A few things that weren’t let-downs were scene-stealing peformances by actors Allison Janney (LaVona, Tonya’s mother) and Paul Walter Hauser (Shawn Eckardt, Tonya’s bodyguard). 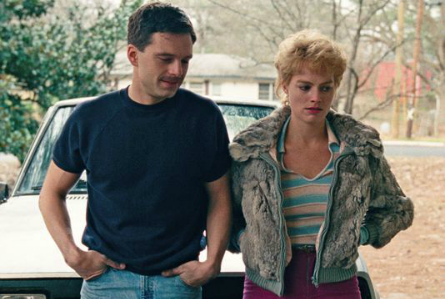 Interesting enough though, is how the movie also addresses the fact that for those who were alive and living in America at the time, will remember the Tonya Harding and Nancy Karrigan incident differently. Most people, as the movie points-out, remembers it going down with Tonya hitting Nancy’s knee with a crow bar herself. Not true! Others, will remember the incident happening at the Olympics. Also, not true! It happened at the 1994 regionals.

The filmmakers had an $11 million dollar budget and 261 scenes to shoot. Some of the challenging aspsects of getting this movie made was contacting some of these real-life people over events that took place over twenty years ago. Tonya Harding’s mother, LaVona Golden who has an abusive notorious history, is M.I.A. Tonya herself hasn’t talked to or seen LaVona is years. Tonya often referred to LaVona as “a monster.”

The filmmakers never found LaVona for the making of the film. Allison Janney (“Mom”) who brings the on-screen LaVona to life, said in regards to the character that she loves to find humanity in all dark corners.”

When Sebastian Stan, who portrays Tonya’s boyfriend Jeff Gillooly, went to research for his role, there’s nothing of Jeff in his 20’s and now in his 50’s. “I had all these questions about him that I couldn’t find.” He said he was finally able to meet with Jeff for one night.

Julianne Nicholson plays Tonya Harding’s real life coach, Diane Rawlinson, who
didn’t want to have anything to do with the movie. She was from a different world than Tonya, said Nicholson. “I thought it was such a fascinating pairing” added Nicholson about Tonya and her coach.

Tonya’s bodyguard, Shawn Eckardt, played superbly by actor Paul Walter Hauser who added much comedy relief to the story, is “not around anymore.” Hauser mentioned that the story has a “any moment the gun can be on the table” feel and likened it to Martin Scorsese’s world (“Good Fellas”).

Writer Steven Rogers said he interviewed “nobody.” He had just finished a Christmas movie and wanted something totally different. He went to the Tonya Harding website to see if her life rights were available. He wrote the whole script on spec. What he got from both sides is that it was Jeff vs. Tonya prespectives. Totally different. He said, that was the script.

Director Gillespie had just done “The Million Dollar Arm” film and was intrigued when his agent called to tell him about this movie “starring Margot Robbie.” He said “it was unlike anything I read.” The script was 170 pages of the energy and the dialouge being all over the place. It’s comedy and tradgedy. “You can’t get the tone if you don’t have the right actors,” said Gillespie. He added that Robbie “is so grounded.” She had five months of skating to prepare for the movie. He said he wanted Julianne Nicholson (who plays Tonya’s coach) from the beginning. She has a “stillness”. He instantly saw the chemistry between Robbie and Sebastian Stan (who portrays her boyfriend Jeff) when he came in to read.

The Q&A moderater described Janney’s character as “probably the meanest Mother movie since ‘Precious.’ What was the secret? “A lot of it was in the script,” stated Janney and added that the knife scene “really happened.” She also commented on the signature real shoulder parot that LaVona carried around. “I loved telling my story with that bird on my shoulder.” She also added, “birds are scary.” Janney referenced the bird as an extra obstacle that LaVona had to overcome while telling her story, and “that bird in my ear – not going to stop me from telling my story.”

Gillespie noted that because the script had self-reflective aspects such as when LaVona addresses the camera and the audience behind it that the script is losing her storyline, he knew that the studio system wouldn’t be on board with that. 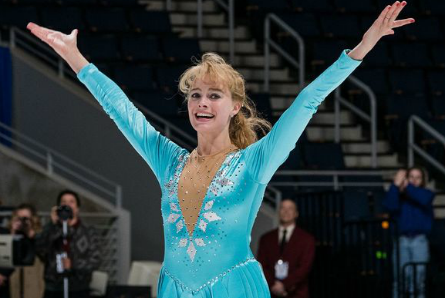 Robbie stated that during her role there were “a few times where I lost myself in the script. I get that feeling when I play a character. That’s why I love acting…when it does happen, it’s the most exhilerating feeling.”