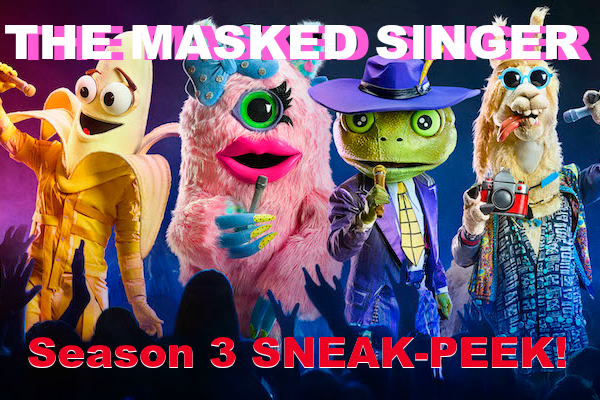 FOX’s celebrity singing competition hit show that viewers love to play along to, “The Masked Singer” is returning for its season 3 premiere after the Super Bowl on Sunday, February 2, 2020.

Hosted by former “America’s Got Talent” host Nick Cannon, “The Masked Singer” has uped its number of celebrity performers this season, with a whopping 18 contestants. The new format will roll-out six singers per round, three rounds total. All original judges since season one are back – Ken Jeong, Robin Thicke, Jenny McCarthy, and Nicole Scherzinger.

“The Masked Singer” started filming it’s third season the week of December 16, 2019. It entered into round 2 filming the week of January 23, 2020, and will be starting it’s third and final round on February 5th. They are apparently rushing these episodes out this time around, airing them before the season has wrapped. The two previous seasons, the show had finished filming before the season premiere dates. Viewers will have the chance to be part of the studio audience before the end of the season.

“The Masked Singer” undoubtedly has some of the biggest and most devoted fans out there. One set visit revealed that there were some “super fans” in the audience who have attended every single taping. Others were especially excited to repeat judge Ken Jeong’s catch phrase on the show “I KNOW EXACTLY who this is!!” They were told by production not to repeat the phrase while Jeong himself was saying it. Another regular statement made by host Nick Cannon “That was an amazing performance” is another popular catchphrase.

Security is always high and of special importance on “The Masked Singer.” The masked celebrities and their entourage all wear masks while outside. They’re escorted onto the CBS Television City lot in Hollywood via heavily blacked-out tinted windowed vans. Each section of the studio audience has it’s own security constantly scanning for possible issues. Production warned no audience members wandering off because there is a spot located somewhere off stage where the celebrities have clearance to take their masks off. No one is allowed in that area. Not even the crew members.

We did some snooping around to find-out some details to season 3 of “The Masked Singer.” This is what we know:

MASKS: We know that the show has already revealed quit a few of the Masks to season 3. They include: Kangaroo, White Tiger, Turtle, Banana, Elephant, Kitty, Taco, Mouse, Robot, Lama, Miss Monster, Astronaut, Swan, and Frog.

CLUES: The Banana said when he was approached to be the “Banana” he hesitated.  But, when the next day his daughter gave him a banana, he thought it was a sign and agreed to be on the show.

Judge Robin Thicke slipped and said they already had a legend unmasked earlier this season when he was speaking about another possible legend standing in front of him on stage. He eluded to the fact that he was surprised that the show would have two huge names of this caliber both in the same season. Audience members quickly tried to piece together clues with possible living legends.

It was also mentioned by one of the judges that the Kangaroo has a tragic backstory that made celebrity guest judge Jamie Foxx cry.

Judge Jenny McCarthy said she got “more feels” from Kitty mask’s performance than from Kangaroo’s and was her favorite so far.  Robin Thicke also said Kitty was his favorite.  After Kitty performed “Dangerous Woman” by Ariana Grande, judge Nicole Scherzinger responded, “purr-fet performance.” Nicole also stated that she looks at every masked singer’s crotch to try to gauge their heights!