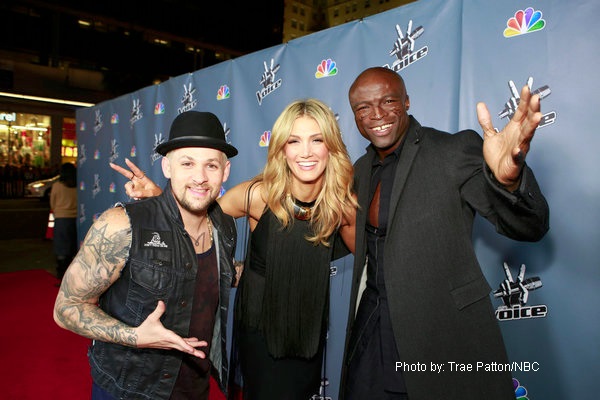 NBC’s singing competiton show “The Voice” previewed the first episode to Season 4 last night at the TLC Chinese Theatre in Hollywood. Coaches from season 4 attendend as well as coaches from “The Voice Australia” that include Seal, Delta Goodrem, Joel Madden who stopped to talk to reporters and answer some questions about their second season. Newly added coach Ricky Martin, who took over for Keith Urban from the first season and is now a judge on “American Idol” was not in attendance.

Seal added that Ricky Martin is very passionate, “If you’re an artist coming on the show and you are an inspiring artist, that’s what you want to see is passion from the coaches…you don’t want non-constructive criticism. You want to leave a winner.”

Madden was asked about being Shakira’s adviser this season on “The Voice” for Team Shakira during the Battle Rounds. He stated, “Coming back doing the second season (“The Voice Australia”), then coming to work on the US set was a really interesting experience. Working with Shakira and seeing her style of coaching – actually I’ve know Shakira for years but getting to understand why she’s Shakira all you have to do is be around her and listen to her talk. Her passion for music and her smarts.” Madden continued, “she knows music very well. She has a very strong ear and can hear things. I was just impressed by her. When you get to be around Seal or Ricky you understand why they are who they are.”

Seal said he will continue to tour in his off time from THE VOICE Australia. One reporter asked Seal how he liked being a coach on “The Voice Australia”. Seal replied that he likes coaching and that there are very few things that are more fulfilling than coaching. “You don’t have people coming onto the show looking for 15 minutes of fame. You have really established artists or people that have been knocking on the door for a while and for some reason that door won’t open. So they can all sing. What they’re looking for is for you to tell them why that door won’t open.”

Seal started to talk about a member on his team. However, was corrected that he is not suppose to reveal that information yet. Production of most shows moves much faster than before they are aired. Seal went on to say that there is a 67 year old man in “The Voice Australia” competition this season. As for advice, they had none to offer to the new coaches on the American side and said that Shakira and Usher don’t need any advice.