“The Voice” Top 10 this week was an extremely important week because the artists who made it through on Tuesday’s Results show meant that they would also be going to next week’s Semi Finals round.   By the end of Tuesday night’s episode, fans had a Top 8.  Last week’s Results show had performances from Team Blake, and Team Camila.  This week, we heard performances from Team Legend with all three of his artists who sang The Band’s “The Weight.”  Team Gwen with her one remaining member Justin Aaron who sang “Burning Down the House” by the Talking Heads. 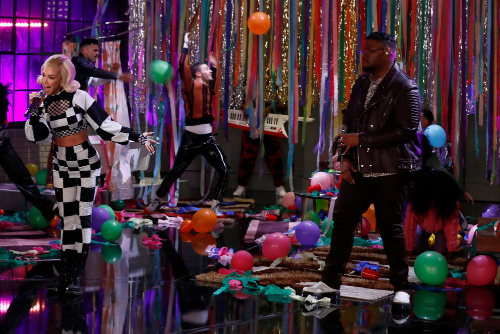 Team Legend opened the show with their performance.  After that, the rest of the Top 10 artists joined them on stage to hear the first set of results.   Kique from Team Gwen, who was recovering from Covid,  joined remotely.

Daly asked Morgan about when Camila told her she had reached “super star status” on Monday’s performance show.   Morgan answered that it meant so much that Camila still cares so much about her. “Thank you for voting!”  Omar sang a Foreigner song on Monday night.  Daly asked what that moment was like.  Omar answered it meant everything because he’s been wanting to play the piano on the show for a while.  He was also grateful for the standing ovation from coaches.

Daly asked Brayden what he wanted to tell young fans.  Brayden said he wants the younger to know that he wasn’t anything special either and now he’s’ on this stage and they can also do it.  Before the first reveal, Daly noted that it’s not in any particular order.  Though, he stated, people think it is.

The first artist announced as Saved was from Team Blake…Bodie!  The studio audience could actually be heard calling out Bodie’s name.  The next artist who was Saved was Morgan Myles from Team Camila! 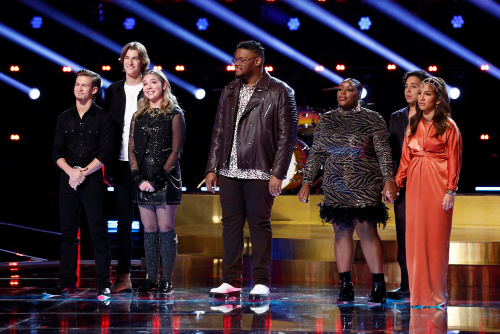 Rowan’s message to fans back at home in South Dakota was thanking them for supporting her since day one, and she said she misses everyone.  Justin Araron sent the message to his students to “keep doing it.” And he’s living proof of “one yes!” 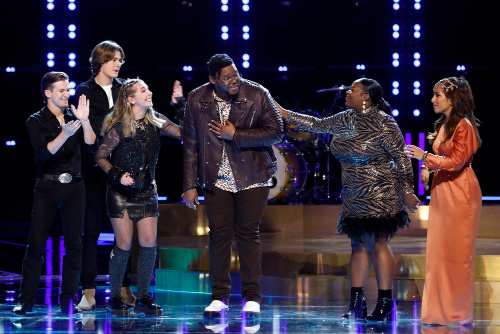 After a quick game of “Barmagadon” played by the coaches to promote Blake and Carson Daly’s new show by the same name, the remaining six artists came back onto the stage.

Parijita Bastola said she’s so appreciative to have this platform to make other brown, Napalese women feel seen.  Daly asked Kique about the challenges of this week and how they made him stronger. He said he learned that he has to work twice as hard and learned that last week and this week. 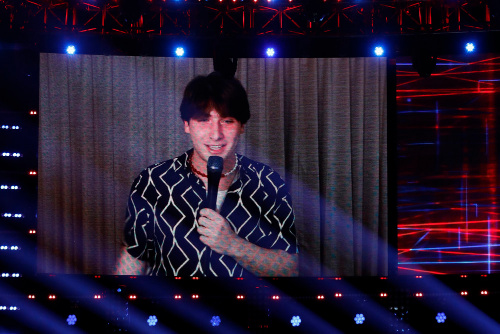 The next result was a Saved artist from Team Blake.  That was Brayden Lape who’s the youngest in the competition!

Bryce Leatherwood said he was so glad to have a coach and friend that is Blake Shelton.  Kim said she hoped that America saw her heart and her drive. “It’s been a crazy, crazy journey for me.”  She said every chance she gets, she’s leaving it all out on the stage.

Only two artists were Saved by America.  The other three artists had to perform for the Instant Save vote.  America Saved Parijita Bastola from Team Legend.  She’s 17 and the second artist from Team Legend to make it to the Semi Finals.  The next artist announced as Saved was Team Blake’s Country artist Bryce Leatherwood!  That meant three artists from Team Blake were going to the Semi Finals!

Rowan, Kique and Kim were in the Bottom Three and had to perform for the Instant Save.

Rowan Grace (Team Blake) sang “Landslide” by Fleetwood Mac.  Rowan was emotional afterwards. Coach Blake said every time she gets on the stage, it’s like watching a Grammy performance “Those are the kind of songs she really shines on.”  The songs that everyone knows.  He asked America to vote for Rowan!

From Team Gwen, Kique’s performance was pre-taped.  He sang “Take Me to the River.”  Gwen was crying after his performance.  She said “I can’t believe you’re in a box still.” She said every season there’s so many talented artists. But it’s rare for an artist to be so young to be so unique and “so recognizable.  You can understand his whole personality through his unique voice.”

Kim Cruse from Team Legend performed next. She gave a powerful, biblical performance of Brooks & Dunn “Believe.”  Coach John addressed voters, “you saw all four coaches standing for Kim, America.  His tactic worked, by-the-way.  He called it spiritual, moving, and her voice has so much soul and warmth.  John added that Kim is one of the best vocalists he’s ever worked with.  He told America not to let Kim go!

Rowan thanked Blake for Stealing her in the Knockouts and giving her another chance. She also thanked Gwen, her first coach.  Blake said he doesn’t like to say he “Stole” her, instead, he “adopted” her.  He said everyone’s going home from the show in two weeks “it’s only just the beginning for you.”

Kim Cruse thanked John for helping her see the potential in her that she’s been afraid to see. She said he’s been an idol of hers since high school.  John said he’s surprised that she’s not walking out of here with the utmost confidence. “I see so much musical understanding…you are just a joy to work with. Truly.”

Kique’s coach Gwen Stefani told Kique that she’s been on the show for six seasons, and he’s the first artist that she’s worked with where she’s been truly  blown away by his artistry.  “Whatever he wants to do, he’s going to come with his own vision.”  She said that’s a true artist.

Kique thanked Gwen and said he walked into “The Voice” as an “unruly” 18-year-old.   He’s walking out a less unruly 19-year-old! 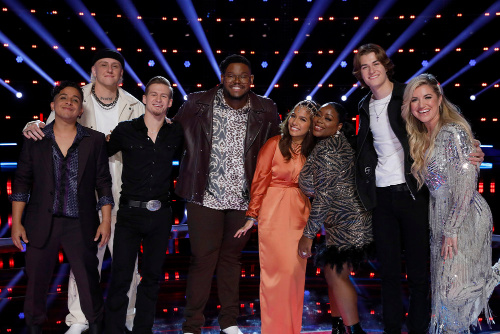