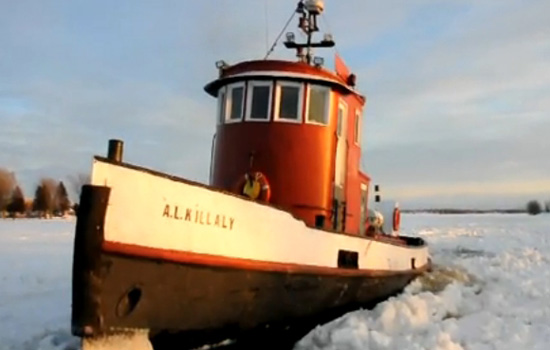 During this year’s Comic Con, Hollywood Junket reporter Lincoln Blanco got a chance to talk to HISTORY channel executives about some of their reality shows. Specifically, two that both take place in vast bodies of water.

HISTORY channel attended Comic Con to introduce comic book fans to a series of comic books that are based on some of the network’s shows the first one is “Mankind”. History executive stated, “What better way of getting kids to learn about history than reading it in a 3D graphic novel?”

The network reps stated, “History is about cinematic story telling. It’s the perfect fit for a graphic novel. It’s essentially what comic books do for kids is they take those larger than life ideas and put them in a very easily understandable package. We have other shows coming up next Spring. The Vikings and The Bible.” HISTORY expects to be back at Comic Con next year to promote those shows.

A new reality series which premiere July 19th is “Great Lake Warriors”. Executives said, “It’s a tugboat on the Great Lakes – the most dangerous body of water in the Americas. You don’t know what’s underneath that water. Watching these guys have to fight for their lives everyday and them having to get their supplies to places. It’s a great cast of characters as well.”

Our reporter asked them if HISTORY was attempting to take-on DISCOVERY by having the competing shows about working in the ocean. Their reply was that with Shark Wranglers, “We are trying to do the stories about the guys who create that conservation effort. Our History story is about guys that make history everyday. That was more of our intent to follow this crew of guys who are really passionate about saving this eco system that’s in danger of disappearing. Those are the guys that we wanted to focus on. Not so much in taking on Discovery. Because they already have Deadliest Catch. They are Really going out there and doing what we have not seen anybody do which is wrangle sharks that saves them and not hunt them.”