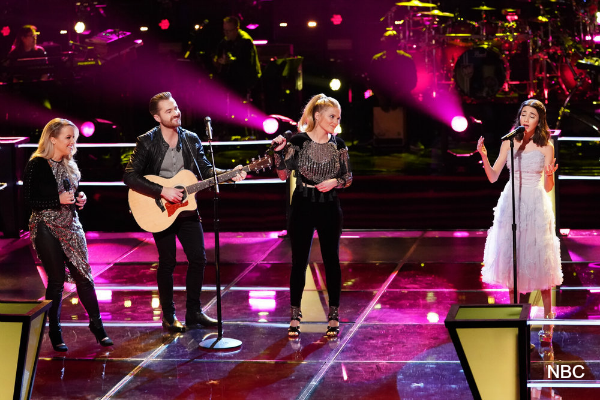 “The Voice” season 16 Blinds have ended and the coaches are off and running with their freshly built Teams of 12 into the Battle Rounds where they will continue to rebuild their Teams. Some artists will be dropped by their coaches, and some will be quickly picked-up by other coaches with the “Steal” option. Advisers joined the coaches to help navigate their teams in the Battles.

Charlie Puth joined Team Adam. Fifth coach from last season’s Comeback Stage Kelsea Ballerini advised Team Kelly. She’s also joining Kelly for her tour. Khalid advised Team Legend. John said Khalid’s songs have “such an emotional honesty to them.”
Team Blake had winners of 18 CMA awards – Brooks and Dunn joining his Team as advisors. Blake said they’ve accomplished everthing you can dream of. He said the Battle rounds are what really separates the people who are ready for this competition.

Blake threatend Legend that he plans on winning with the people he’s going to steal off his team.

Khalid,who’s 21, was helping-out Team Legend. He thinks Khalid will have valuable advice to up-and-coming artists. He said he had people who coached him and if he did’t have that he wouldn’t be in the position he’s in now.

Shawn is “teacher by day, rock star by night.” John said he picked that song that he felt they would both knock out of the park. They were both four-chair-turns. He chose “Never Too Much” by Luther Vandross. Khalid said Matthew’s voice is so warm it’s like a hug. Khalid advised Shawn to “feel” what he’s singing.

Adam called their Battle like a tennis match and it’s “an interesting choice” and not sure why they’re paired together. Blake called the Battle “unbelieveable.” He called Shawn’s dancing next to none. Kelly called them “phenomenal” and it’s why they’re both four-chair-turns. She said Shawn’s runs are “crazy cool” and Matthew makes her smile with her heart. John said he can see the music within them. They’re both fantasic singers. John chose Shawn Sounds.

WINNER: Shawn Sounds. John said Shawn lit the room up and he can do “a lot of great things” with him as a coach.
STEAL – Adam and Kelly pushed to Steal Matthew. Adam called Matthew the “shining light” on the stage. Kelly called him “outstanding” and she not only wants great voices, but “great humans.” Matthew chose TEAM KELLY.

Mikaela Astel vs. The Bundys

They area all huge fans of their Team Kelly advisor Kelsie Balarini. They toured with LeAnn Rimes. They thought The Voice would be the perfect opportunity to bring them together after one band member took a maternity leave. Mikaela is a Freshman in high school. Kelly said at age 14, Mikaela has such a fire in her. Kelly advised Mik tht she has to have “zero heistancy.” Her emotional connection with the song is her Grandma. Mikaela said she found her love of singing because of her grandmother. The Bundys took Mikaela under their wings and said they don’t want to see Mikaela go after the Battles. They sang “Songbird.”

John called The Bundys’ harmonies beautiful. Adam said Mikaela was nervous, but hello, she’s up there with three other people. Blake said to Mikaela that “The Voice” can be overwhelming. “The last thing any of us want to do is to discourage you.” Kelly said Mikaela is the youngest on her team with a powerful and peircing tone. “I hate this moment.” Kelly chose The Bundy’s as the winner.

Battle Winner: The Bundys. Kelly said Mikaela is really special and hopes she continues to perform.

COMEBACK STAGE:
The artists in the Comeback Stage must face-off with the artists eliminated in the Battles. 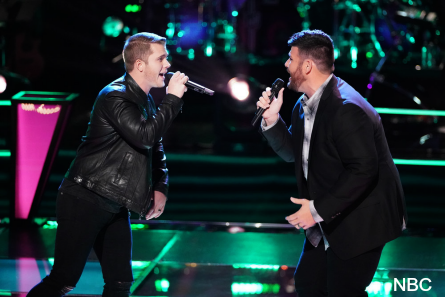 Blake said advisors Brooks and Dunn are legends and have accomplished everything in music you can dream of. Blake paried Gyth vs. Rod becasue they are his powerhouse Country singers. Gyth represents new Country, while Rod is more traditional, old-school Country. Blake gave them “Drunk Me” song. Rod said he’s never sang outside of the church. Rod was the last member added to Team Blake. Gyth grew-up on a race horse farm by a single father. Blake used his only block on Gyth when he Blocked Adam from him during the Blinds. Brooks & Dunn noted that Gyth and Rod are two different kinds of singers with different up-bringings. Blake noticed that Gyth likes being on stage and it shows. Rod has a huge voice that’s raspy and it will be hard to pick one singer.

Kelly said Rod’s voice has a Travis Tritt, raspy sound. She can tell that Gyth has performed quite a bit. But, went with Rod. John called Rod’s vocal tone interesting and unique, and Gyth has “the runs.” He thinks Gyth’s voice has “more flexibitliy.” Adam said there’s more potential to what Rod can do on the show and went with Rod. Blake called it “an impossible decision” and they both gave it 150%. He gave it to Gyth.

Battle Winner: Gyth. Blake said Gyth had the bigger mountain to climb. He stepped-up to the challenge.
STEAL – Adam stole Rod. Adam said he loved his Blind and wants him on his Team. Adam said he thinks Rod is better than people and even Rod realizes it. Blake wasn’t happy that Adam has a Country artist on his team now. 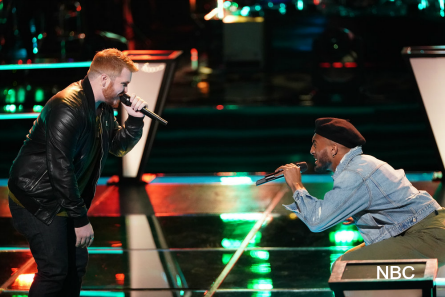 Adam called Charlie Puth the perfect advisor. Puth said this is what he does for a living, he’s a record producer. He and Adam are close friends and hang-out a lot. Adam called Charlie “an amazing man.” He paired Dominc and Trey – it’s a great Battle. Trey’s voice is more refined. Adam gave them “I Need a Dollar” song. Domenic feels pressured to do especially well because Adam was his only chair turn. Adam chose the song because it’s a little bluesy. Puth said he admired Domenic by making the song his own. Puth called the pair a “dynamic duo” and it comes down to whoever “makes the bigger splash.”

Blake called it an “incredible even Battle.” He liked Trey’s “cool falsetto notes” and Domenic plays with the pocket with a “great grawl” and went with Domenic. Kelly said Try had an intesith with faleseto and all that range. Kelly chose Trey. John said he wanted Domenic on his Team but was Blocked. He called Trye’s rang “awesome and dynamic.” Adam said it’s hard when they do everything they talked about perfectly. Trey had so much passion he almost threw himself off the stage. Adam based his decision not harping on the technical. That was Domenic . He called him “indespensible.” Adam said he’s a star and there’s something about him that’s “spectacular.” 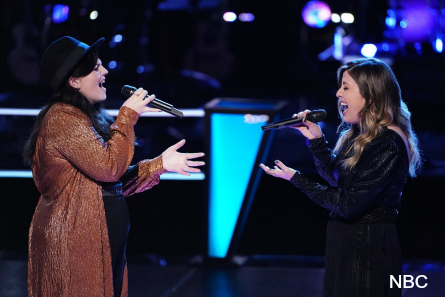 Khalid was the adviser for Team Legend. Maelyn is deaf in one ear but uses it to her advantage by being able to hear the tone of a note through one ear. Savannah is in her Senior year in high school. John gave them “When We Were Young” by Adele to see what they can do with the song. John said he can tell that Savannah has been singing all her life. Khalid was surprised by Maelyn’s heavy voice. John advised Maelyn to personalize what she’s singing. Khalid advised Maelyn to talk to her younger self in this song performance. John noted that Savannah wasn’t comfortable in that low space. Khalid said they took the song and ran with it. Their performance made him want to cry. John said you can tell that they love singing together and they have a connection. The song is going to make them shine.

Adam said they shared the song. They did a great job with “a monster of a song.” Blake said they found out that Savannah is incredible. Kelly turned for both of them in the Blinds. She can tell that Maelyn is an experienced singer. But there’s something so raw about Savannah at 17 and went with her. John said you can see the love they have for each other and weren’t trying to out-do each other. There was “a kindness to it.” He said he chose who he thinks will do better in the competition. That was Maelyn.

Battle Winner: Maelyn. John said he can tell she is such an accomplished singer. “Maelynn will not let me down in this competition” and will deliver whatever is asked in the competition. Bake said he’s looking for someone who stands-out.

Savannah has another chance in the Comback Stage. Bebe Rexha called her very talented with such control at a young age.

Kelly’s advisor, Kelsea Ballerini who is going on tour with her. Jej was 15 when he moved from the Philpines to the U.S. and didn’t speak English. Jej was a three-chair-turn. Kelly told him she could win the show with him. Beth’s father was Johnny Griffith, a Motown musician. she was in her 30’s when she started her music career. Beth went with Kelly because she’s won the show. “I am here to win,” stated Beth. “Jealous” by Labrinth is the song she chose for them because “they are both story-tellers and they are both all heart.” Kelsea said she felt the song when Beth sang it and it felt like her song. Beth said she connects to the song because she knows what heart-break feels like. “It will allow me to have true feeling and emotion for the song” said Beth. Kelly said she’s stupid for pairing them and thinks John will want to Steal one of her artists after this Battle.

John said they were bith incredible and unlike how he’s heard the song before. They both sounded great doing it. Adam liked their unison. He went with Jej because at times he upstaged Beth. Blake said it was hard to call a winner. Kelly said they both did exactly what she askd them and what they did for harmony was note-for-note. Kelly chose Jej as the winner. She said it was one of the best Battles she’s had on her Team. She chose Jej because she said his range was incredible.

Battle Winner: Jej
STEAL – John. John stole Beth. He said when he turned in the Blinds she chose Kelly and feels that Beth is going to do really well in the competition.