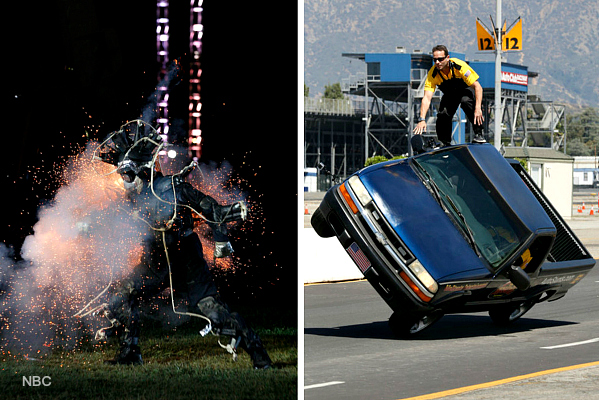 In the variety talent show’s X (tenth) season, “America’s Got Talent” week four episode started inside at the Dolby Theatre in Hollywood, then moved outdoors for some really dangerous “Extreme” stunt auditions which took place at the Pomona Fairplex in Southern California.

Some of these acts included jumping out of a helicopter, crashing into buses with a bus, and wearing live fire-crackers. Some of the more tame and safe acts of the night were a patriotic homage to the National Anthem, a magic act that involved Howard Stern’s mother, and an Opera singer that rivaled Sarah Brightman.

The next act was choreographed by Scott Forsyth who organized this group of 11 young men ages 18-24 years old. Howard said the young men after their audition who were squabbling beforehand, “you took all that negative energy you had for each other and made it into something great!” Heidi said they are hot and loved the attitude of the dancer with the purple ponytail. He responded that it wasn’t real! Mel B. called them “proper and fierce”. Howie thought it was “perfection and amazing!” 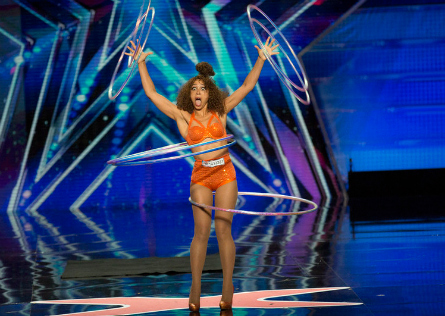 Marawa explained to host Nick Cannon in her Australian accent that she was there to do “the hulu hoop thing.” She studied at a University and earned a Bachelors in Circus Arts which she proved when she hulu hooped with hoops of fire while ascending off of the ground via a wire. She closed her act by doing the splits. Howard said he thought she was beautiful and “loves a college girl.” She got all “yes” votes. 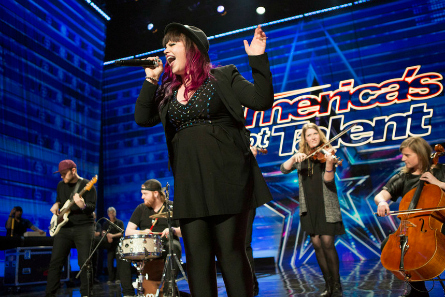 Band leader and singer Stacey performed an impressive version of “Bang Bang” by Jessie J, Ariana Grande, and Nicki Minaj. “I love the idea of a band going all the way,” in the competition said Howard. Howie said she “hit it out of the park on the world’s biggest stage.” 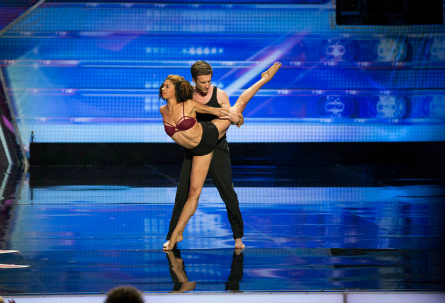 Chris and Princess are contemporary modern dancers who performed a sensual dance. The judges reacted to the dance – Howard said they are “fabulous dancers and he’s going to go home and take a shower. Then Howie and Howard coddled and groped each other!

She’s a young 22-year-old from Columbia who works at her friends furniture store. She looked a bit like Shakira, who is also Columbian. When she was 6 months old, she had open hear surgery because she had a pulmonary heart defect. Now, when she doubts herself, she said she looks at the scar and knows she’s a warrior. Daniella sang Italian Opera song “Time to Say Goodbye” by Sarah Brightman and Andrea Bocelli, perfectly. Heidi told her she brought that song to “another level.” Mel B. said she had a powerhouse of a voice and she was floored. Howie admired that she is brave enough to come live in another country and that she “just made that song her own.” She cried after the judges “yes” votes were in. 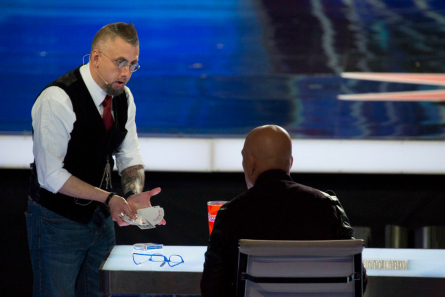 Aiden is from Cheyenne, Wyoming who used to be a con man and served time in Federal prison after turning himself in. He picked-up a deck of cards on day one of his stay in prison and has been practicing magic ever since. For Aiden’s trick he asked Howard to make a phone call in his head to someone he knows while he shuffled cards in front of Howie. Howard said he thought of the person he always thinks of – his mother. Aiden asked Howard to call his mom to ask her to think of a card and tell him. She said (after repeatedly telling him she couldn’t hear him) ten of Hearts. One card faced down in the deck that he had placed before was indeed the Ten of Hearts.

Howard said the worst part of the trick was his mother because she said she couldn’t hear Howard. Heidi said it was spectacular and wants to see more. Mel B liked it and called it a great audition. Howard said Aiden is still tricking people, but in a good way. 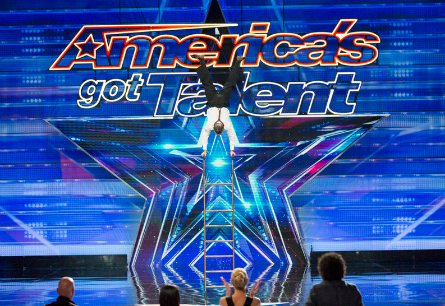 He’s 39-years-old from Las Vegas. He does a little of everything and imitates Charlie Chaplin while climbing up a very tall ladder then doing a hand-stand. Heidi liked it because it was old school variety entertainment. She said “it was already great before you did the hand stand.” Howard reacted, “you were channeling Charlie Chaplin”, and called him a “genius” like Chaplin. Mel B. said he was “thoroughly entertaining. Howie said if Charlie Chaplin and Mr. Bean had a child that ran off to join the Circus, that would be him. 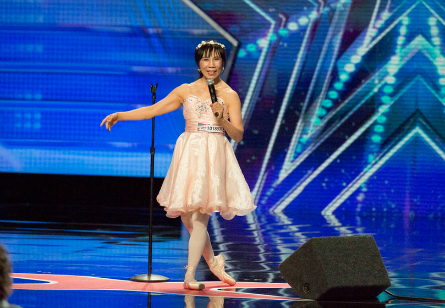 Hanako dances and sings at the same time. What she did was ballet while singing the National Anthem of the United States. Heidi and Mel B. hit their X’s on her. When she was done, the audience chanted “U.S.A.!” Howard said he is the only American judge. That is, the only one born in America. Howard said Hanako’s love for America came through “loud and clear.” He said Heidi and Mel B. don’t understand the love for America. Heidi reacted that she sang well “most of the time.” Howard accused Mel B. of not loving America. Howie said he loves America and loved her act. He gave her a “yes” vote. Howard also gave her a “yes” vote after Heidi and Mel B. said “no,” making him the good guy.

First up was a motor-cross act called “Metal Mulisha Fitz’s Army.” They said one of their members was badly injured. Howard said it one of the most dangerous things he’s seen on AGT. Howard also said in his four years on the show, this is the most excited he’s gotten. Heidi was sick to her stomach and was terrified. She also said shes never seen anything that crazy. Mel B said they left her wanting more and called their stunts “brilliant”. Howie said they scared the heck out of him. 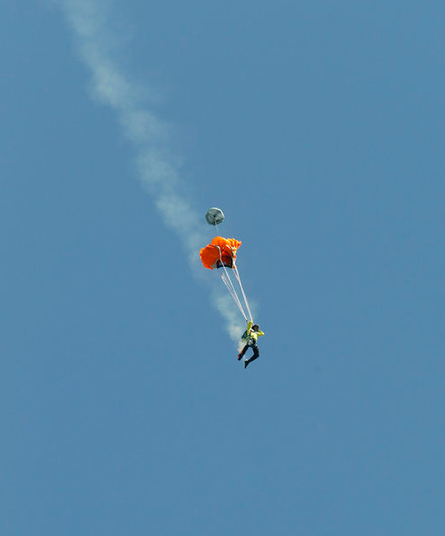 He’s a base jumper who jumps off of buildings, anything he can get on he said. He told Howard that he’s lost a lot of friends who also do these types of stunts. For his Extreme Audition, he jumped out of a helicopter at 3000 feet at 120 mph. Howie said it’s something he’d love to see more. Howard said buildings are his playground, and that it’s his thing. Howie was afraid that Cliff wasn’t going to pull his parachute in time. Cliff got all “yes” votes. 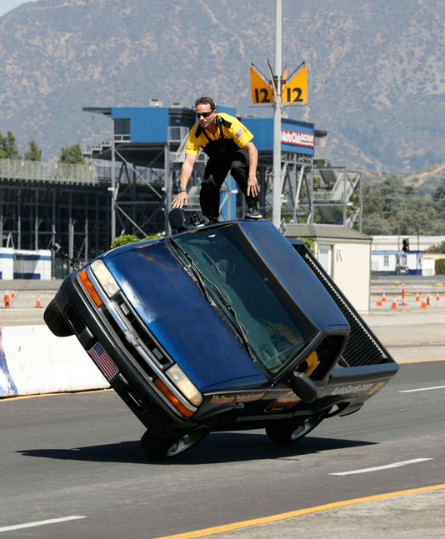 Next stunt had one man driving a truck on two wheels while his partner stood on the truck’s side, with Nick Cannon riding shot gun. 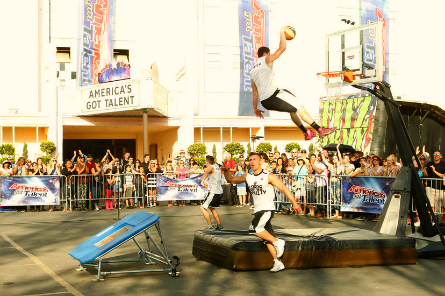 A group of young basketball players jumped on trampoline and did flips to shoot a hoop. One of the members had broken his neck previously. 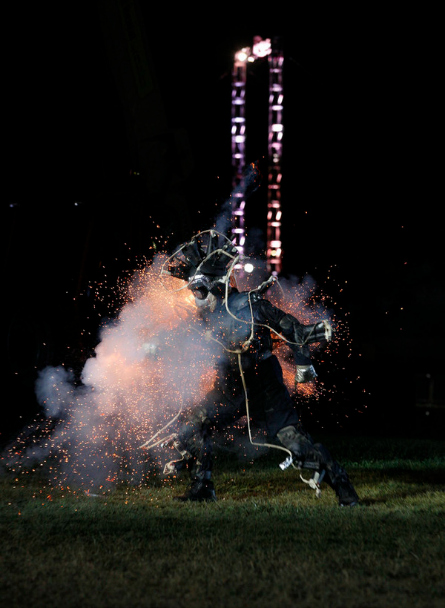 “Pyro Boy” covered his body with fireworks and danced around until they explode. He joked with Howard that women find it hot. Howard said he likes Pyro Boy who is “legally insane.” He said in a “weird way”, he likes him and he made Howard laugh and feel good. For that, he gave him a “yes.” Howie gave him an “X, and said “you should watch fire works, you shouldn’t wear fireworks.” Mel B. also voted “yes.” It was up to Heidi to decide his fate. Heidi voted “yes.” 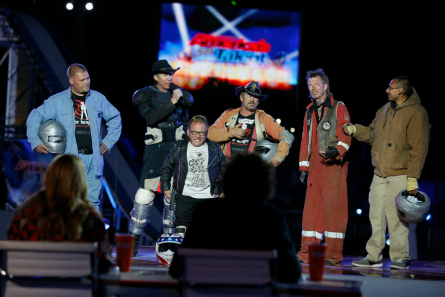 “Dr. Danger” was inspired by Evel Knievel to get his start. A year ago, he had a near career-ending injury in a very bad crash. When Howie asked what do they do, he said they “tare stuff up.” One of the guys on the team was runned-over by a train. Their stunt was crashing into two buses with a bus. After the crash, they walked out of the crash just fine.

Howard reacted “that was the greatest thing I ever saw.” Howie said just the fact that they are walking out of that is amazing in itself and told them he “loves them as a group.” Mel B. said she loves that they are doing something “so crazy and out there.” Heidi called it “larger than life,” and “fabulous.” Howard thought it was “dope.” With that, he granted them their first big stupid ‘yes.”

NEXT WEEK: One contestant will leave in an ambulance.