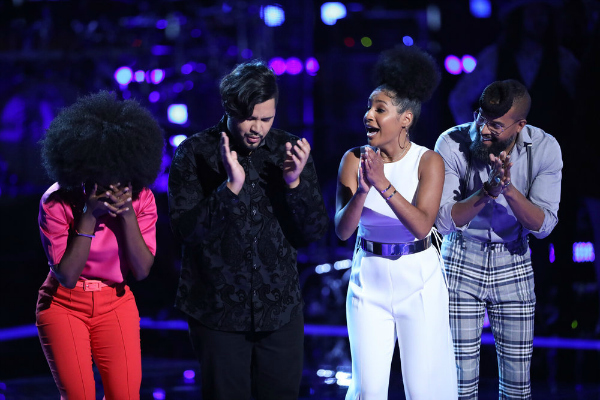 The ever-changing season of NBC’s “The Voice” continued-on with Monday night’s live show. For the first time in ‘Voice history, all twenty-four artists performed AND were up for the first four artists (one from each team) saved in a tidbit of the Top 12 reveal during real-time voting in the same night!

The second night of the live shows showcased performances from Team Blake and Team Alicia. Then on the third night, Team Adam and Team Kelly performed where it was revealed for all teams on which second picks America chose to go to the Top 12. The remaining third place spots was voted by the coaches, which they all hated BTW.

The artists with the most votes from each team on Monday night advanced to next week’s Top 12. The remaining artists got their chances to continue on in the competition during Tuesday and Wednesday nights Live Playoffs shows where they performed again.

The two ways to vote this season are via “The Voice” app, or via Twitter. Retweet to vote. First up was Team Kelly Clarkson. Kelly described her Team as “strong voices that move you” and called her team the team that the other coaches are scared of.

Alexa performed first with “It Hurt So Bad,” followed by Kaleb singing “You Don’t Even Know Who I Am.” Tish sang “Nothing Left For You,” then the youngest singer, at age 15, on “The Voice” Brynn sang “Unstoppable” as she played the piano. Singing “Pick Me Up” was Dylan. D.R. King sang “Home.”

TEAM ADAM is made-up by a majority of singers that coach Adam Levine described as some form of “soul”. Those singers included Rayshun Lamarr, Mia Boostrom, Reid Umstadd, Sharane Callister, and “modern yet classic” Drew Cole, and, according to Adam, “the best Country singer in the competition” Jackie Verna. Adam summed-up his Team as having a “level of class and sophistication.”

TEAM KELLY RESULTS:
Next, it was time for Team Kelly to hear who America had voted for to determine which artist would be the first to move-on to the Top 12. America saved Brynn Cartelli.

TEAM BLAKE – Blake described his team as being “incredibly diverse.” His artists consist of: Country singer who is use to live performing, Pryor Baird, powerhouse singers Kyla Jade and Gary Edwards. Then, Wilkes, who Blake said “has so much range”, crooner Austin Giorgio, and finally Spensha Baker who has a Gospel background, but has a contemporary/country sounding artist.

Starting performances on Team Blake was Austin who sang “Ain’t That a Kick in the Head” by Sinatra. Pryor sang “I Was Wrong.” Kyla gave an emotional performance with “How Great Thou Art” and ended with all four coaches on their feet. Gary sang “Finesse.” Spensha sang “I Still Believe in You.” Wilkes performed “Brother.”

TEAM ADAM RESULTS:
Adam’s all six artists returned to the stage to hear which one of them would move-on to the Top 12. Carson Daly announced that America saved Sharane Callister!

TEAM ALICIA – Alicia said her Team has unique, “super powerful” that are “definitely going to move you.” Her team members included young Britton Buchannan, who “stands out from the pack. Christiana Danielle, Kelsea Johnson whom Alicia said has an “effortlessness about her.” Terrence Cunningham who is “brillant with music”, Jackie Foster who Alicia stole in The Battles, and Johnny Bliss who is “amazing” and sings in Spanish.

TEAM BLAKE RESULTS:
Team Blake returned to the stage to hear the fate of the aritst moving-on.
Blake said he knew he had a good team “but I didn’t realize that you were ALL that freakin good!” He said you find out what they are made of and they all “stepped-up to the plate.” Blake’s artist who was saved was Kyla Jade!

TEAM ALICIA RESULTS:
Alicia called her team “spectacular” and so special. She said they each are a true definition of an artist. America saved Britton.

Artists left got another chance to perform for viewers’ vote. The night started out with Spensha Baker from Team Blake singing “Smoke Break” by Country artist Carrie Underwood.

Kelly said the fact that she sang a Carrie Underwood song and nailed it is “amazing” and “huge.” Kelly also added that she agrees with Blake in that Spensha will be “a force in Country music.” Coach Blake reacted that Spensha is one of his favorite artists because she’s so special and her peformance represents the lane that she needs to be in. 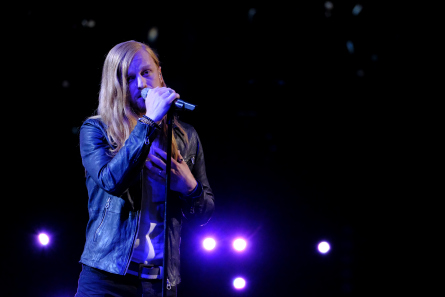 Wilkes gave a brilliant performane of “Don’t Speak” by Gwen Stefani that ended in hauntingly powerful acoustics and a mic drop of a different kind at the end which resulted in a standing ovation from the coaches. Was that ending intentional? No, not at all. Adam responded that Wilkes deserved to go through because that was “the illest improvinization” that he’s ever seen! Alicia called Wilkes special “you don’t TRY to do it you just ARE it! and his range is incredible. Adam pointed-out that although the accident wasn’t planed, he’s going to copy it! Coach Blake pointed-out that the contestants this season chose these songs, and called Wilkes “a pro” the way that he handled that mic dropping!

The pressure was on Pryor Barid who sang Doly Parton’s “9 to 5” when he made a bit of a flub midway in his performance singing the wrong verse. Daly described his performance perfectly Bob Segar singing Dolly Parton. Adam expressed that Pryor deserved to be on the show for the rest of the run. Coach Blake agreed. “It’s hard to imagine you not getting through.” Blake also complimented Pryor for singing the song in the same key as Dolly, “I don’t know where you get this range from.”

Austin Giorgio sang “Love Yourself” by Justin Bieber. Alicia complimented the “light” that Austin has inside him and loves that he has his own style, keeping the classics alive. Blake said Austin has also earned his place in moving forward on the show for “carrying the torch” for what he’s doing musically.

Gary closed it out for Team Blake singing “America the Beautiful.” Kelly reacted that his runs and range are both insane! Has a presence on stage tht capivates peope. Coach Blake racted to Gary’s performance with “you have made your presence known,” and called it a “big move.”

Terrence Cunningham sang “Ain’t Nobody” in a jazzy sort of lounge singer kind os way. Adam noticed one change that Terrence did that was “from another planet” He called what Terrence does, “so seasoned, jazzy and sophisticated voice”. Alicia noted Terrence’s specialness for arranging his own music and touches and moves people. 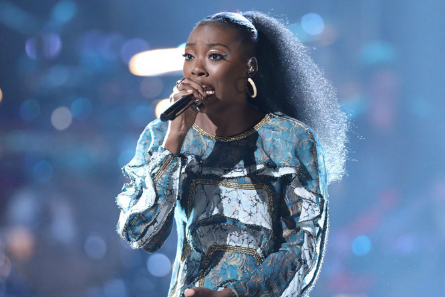 Christiana gave a breathy performance of “Take Me to Church.” The coaches, especially Kelly, loved it! Maybe it wasn’t the best song choice for her voice. Kelly took the majority of the time raving about Christiana. Basically, Kelly called Christiana “the greatest person on this show.” and said she’s the one to watch, “ridiculous”… so good! Coach Alicia called Christiana “a Goddess decsended upon the Earth” with a pure energy, and a one-of-a-kind voice.

Jackie Foster was up next. She sang “Alone” by Heart. Alicia told Jackie that she has a clear idea for the type of artist that she is and can’t wait to see what she produces on her own. “Don’t take for granted for how hard it was for her to do what she just did…and so flawless.”

Kelsea Johnson sang “Need You Bad.” Coach Alicia raved over Kelsea and stated she was “swagging so hard” on everyone. Alicia continued that Kelsea (like her other artists) is special because she’s one-of-one like Lauren Hill, and has an essence that doesn’t compare to anyone else’s. Kelsea is “carving out her own space.”

Johnny Bliss closed out the night singing “One and Only.” Alicia called Johnny “the most beautiful energy,” and so versitile. Again, she said Johnny has a one-of-a-kind voice and able to sing in the same key as a female (true). She reminded the viewers that Johnny can also sing in Spanish.

After their performances, the votes determined who would make it into the Top 12. Team Kelly opened the show with Kaleb Lee performing “Die a Happy Man.” Kelly called Kaleb the best Country on the show. Of course, Blake was offended.

Alexa Capelli sang a vaugely familiar version of “Stop and Stare” song by One Republic. Kelly was emotionally excited because she “was one of her.” She called Alexa “captivating” in bringing people to her. 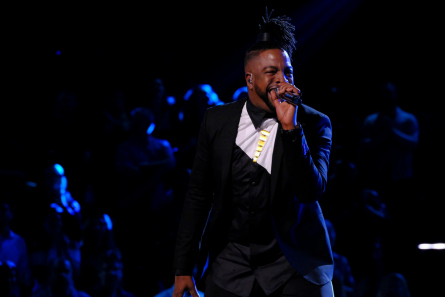 Next, D.R. King gave a mediocre performance of “All on My Mind.” Kelly called D.R. “seriously” so talented, and not everybody on the radio has that.

Dylan Hartigan sang Tom Petty’s “Mary Jane’s Last Dance” while the music out-shined him at many points in the performance. Kelly reacted that Dylan has “a beautiful package” and has a powerful range. She said he’s incredbile in making a Pop song his own.

Tish Haynes Keys gave a less than stellar shortened performance of a classic throwback by Etta James “At Last”, lacking the sharpness of the orginal song. Kelly loved Tish’s “big notes” and called her a phenomal singer.

Reid Umstattd replicated ‘Long Cool Woman (In a Dark Dress)” song exact. Adam called it old school classic that no one’s done yet and gave him props for filling the performance with energy. Adam acknowledged a “last minute” session in regards to the performance.

Jakie Verna gave an outstanding perfomance with “Once” song Adam was “beaming with pride” becuse everyone underestimated her. But, she is “beastly” and “one-in-a-million.”

Mia Boostrom left it all out on the stage with her performance of Chris Stapleton’s “Either Way.” Mia got a standing ovation from the coaches. Adam said Mia has beat the odds over and over again. “That’s a tough song by an amazing artist.” Adam also appaulded her “ambition”, and stated that she’ll “continue to grow” in the competition. These statements gave the underlying tone that maybe he didn’t think she performed up to par. 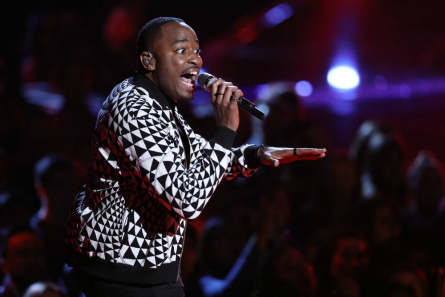 Then Rayshun Lamarr came out and it was the performance to end all performances when he killed it with “I’m Going Down.” Adam called him a “one-off” and claimed he just “destroyed the evening” and “won the week!” 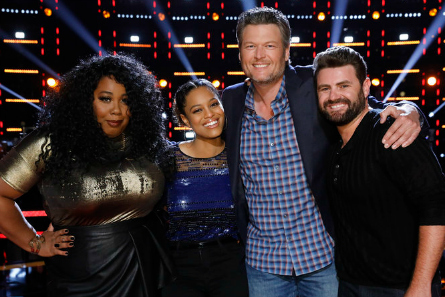 The remaining artists came out onto the stage starting with Team Blake. Host Carson Daly announced the first aritst who received the most votes. It was Pryor Barid. Then Blake was called to save the next and last artist moving forward – the aritst who can make a big difference in the genre – Spensha Baker. That mean, Wilkes, Gary, and Austin all went home. 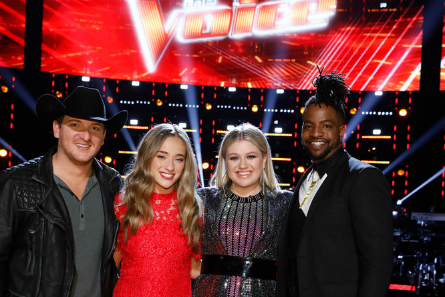 Next, it was revealed that America’s votes saved Kaleb Lee. She promised that she would put everything into helping the aritsts not chosen on making their dreams coming true. Kelly’s choice was D.R.King. Her reasoning was because –
from the very begining he made her turn her chair with “such a beautiful song selection.” and is everything she’d want to do as artist. 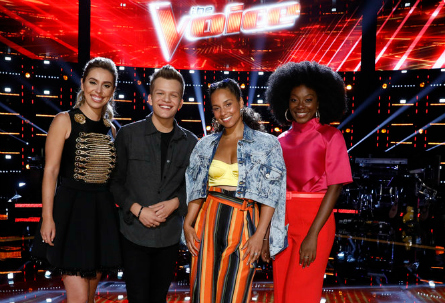 Team Alicia – America saved Jackie Foster. Alicia called the new format “notroious” and “I wanted to quit today. They wouldn’t let me…this is the worst moment ever. I wish it never came.” She chose Christiana. 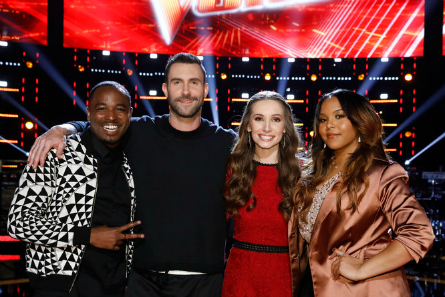 Lastly, it was Team Adam Levine’s turn with America’s Save being revealed as Rayshun Lamarr. When Adam had to chose he reacted “this is so crazy. I don’t like this new format. It’s really stupid and I hope we never have to do this again in this particular fashion” because none of the aritsts deseve that. He said he imagined this artist singing a song he heard on the radio that day. It was Jackie Verna . That meant, Drew, Mia and Reid’s time was cut short on “The Voice.”

NEXT WEEK: Carson Daly announced that The Top 12 will have some “personal performances.”