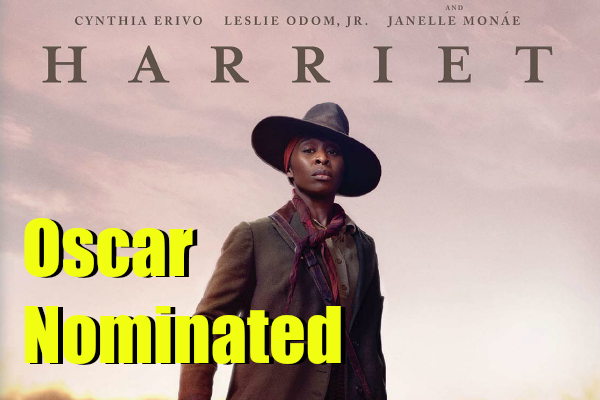 “Harriet” movie actress Cynthia Erivo who played Harriet Tubmen in the biopic directed by Kasi Lemmons, sat-down for a SAG (Screen Actors Guild) Q&A. A popular question at such an event is how did she get her SAG card? Erivo answered that she got it from the movie “Widows,” in which she played “Belle.” She recalled that it was the first time she saw herself on screen.

“Harriet” is nominated this year for two Academy Awards for Best Actress for Cynthia Erivo, and Best Original Song, “Stand Up” a song Ervio wrote with Joshuah Brian Campbell.

Erivo said “I love being busy and working on people finding out what makes them tick.”  She recounted her audition for “Harriet.”  Erivo said it was while she was in the middle of “The Color Purple” performing on stage that producer Daniela and director Kasi came to see the show.  That same week, she met with them.  She recalled that they didn’t say what the character was until the end.  It took about two and a half years from then to when they filming it.

To prepare for the role, she had to train her body for stunts.  Erivo intensified her workouts and did reading about spirituality and she said it’s been wonderful to talk about that out loud.  “I believe in God,” stated Erivo.

Cynthia Erivo noted that in pictures Harriet doesn’t really smile.  And finding her voice was also difficult because there are no recordings.  Her singing had to be grounded.  She said “we made it an alto.” She couldn’t be the one singing because she’s a soprano.  In 2013 she wrote “Fly Before You Fall” featured in Beyond the Lights.  She wrote “Stand Up,” a song for “Harriet” with Joshuah Brian Campbell. A song nominated for an Oscar for Best Original Song at this year’s Academy Awards. Erivo said she found Campbell at seminary school.  She sat with him and they wrote for a couple of hours.  This was after the film wrapped.

Filming for “Harriet” started September 26th to December 5th. A lot of it was filmed outside in freezing weather throughout Virginia .  It was comparable to much like what the real Harriet Tubman endured.  The night she filmed the water scene, Erivo recalled the weather being 37 degrees.  She stated, “I wanted it to be as close as possible to her experience.” This also meant that she had to wear a corset, two petty coats, along with boots.  It was important to do everything efficient with things that don’t need to be efficient.  With all the running back and forth and the costume and riding on horses. “It made me want to be fearless,” said Erivo. And, “when role ended, it was like saying goodbye to a best friend.  She’s still a part of my life.”


Erivo said after “Harriet” she didn’t completely decompress because she started a concert right away.  She went back to London with her mom.  That’s when she said she broke down in tears. “The decompression  was forced upon me,” admitted Erivo.   It wasn’t enough to learn the lines. Getting ready to move out the way in case Kasi figured out she wanted to be a part of it.  She went to the African American museum and spent some time around the Harriet Tubman display.  She met some of Tubman’s at the museum in DC.  Erivo said “to know they were happy with us was really cool.”

Erivo said the main difference in theater is you get immediate reaction.  The audience telling you what they want.  But, with film you have to rely on your instinct and trust the people around you are leading you in the right direction.  She said vulnerability is her strong suit.  Erivo was given that by her acting teacher. “I feel like I have more access when I’m vulnerable,” said Erivo. Her greatest take away from “Harriet” is – No matter how small you are 5′ (like her) or how insignificant you are made to feel, you have the opportunity to to change the world.  Harriet Tubman made thirteen trips, and was the first female to lead a battalion.   She saved 750 plus lives.

Erivo’s upcoming projects include an HBO series “The Outsider” she did in January, and coming-up she stars as Aretha Franklin in “Genius: Aretha” on National Geographic channel set to air in May 2020.