DeMario Who? THE BACHELORETTE ‘MEN TELL ALL Recap

DeMario Who? THE BACHELORETTE ‘MEN TELL ALL Recap 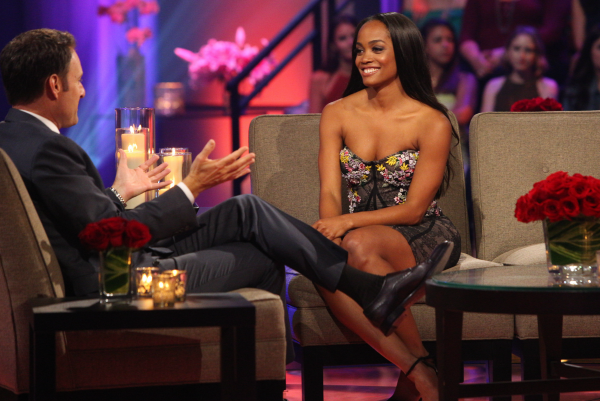 This season of ABC’s “The Bachelorette” produced some of the most interesting, unique mix of men with a high level of conflict. More than previous seasons. Host Chris Harrison warned on “The Men Tell All” episode, “you never know what will go down on “The Men Tell All.”

The show opened by recapping the most memorable and controversial moments from ALL of the ‘Men Tell All seasons. Some of these included from Kaitlyn, Joelle, and Emily’s seasons that showed some of the outlandish things some of the men had said to them.

But, what would “The Bachelorette” be without the feuds between the suitors? The first feud in the house to be addressed was the odd one between Blake and Lucas. Viewers will remember Lucas for his “WhaBoom!!” obnoxious trademark phrase! The feud between the two was short-lived because they were not on the show for very long. When Harrison asked Lucas if he was really there for Rachel, he answered that he was. However, he said Blake was “obsessing over me!” Adam said Blake was talking more about Lucas than trying to “cultivate” a relationship with Rachel. 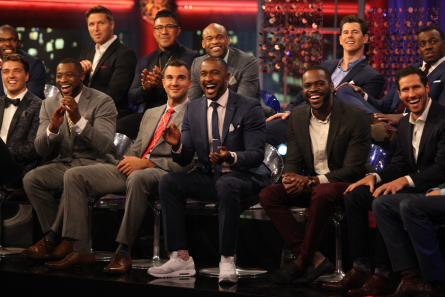 The Bachelorette: The Men Tell All – (Photo: ABC/Paul Hebert)

Then, there was the feud that did NOT happen inside the house, but occurred OUTSIDE of the house. That was DeMario and his girlfriend Lexi who showed-up after a group basketball date. DeMario was still trying to back-pedal and come-up with fake explanations for the whole ordeal. DeMario said Lexi was “a side chick” whom he only called her after 5 pm. The audience booed him. Harrison pointed-out that his story changed and reasoned that he was trying to distance himself from Lexi. Harrison also reminded DeMario that he told him (on camera, “on-tape”) that Lexi was indeed his girlfriend! DeMario still tried to deny it and compared him and Lexi to former President Bill Clinton and Monica Lewinsky.

When Lucas called Iggy “a joke”, Will chimed-in and quickly called “WhaBoom” out “you literally can NOT call anyone on this stage ‘a joke!”’

Kenny, who was involved in the most notorious feud of all this season of “The Bachelorette” with Lee, said the men in the house agreed to “respect each other.” When Lee broke the rule, he called him on it. “I was trying to do MY thing. There was a situation that came up and I checked the dude (Lee),” stated Kenny. Will said he thought Lee and Kenny weren’t understanding each other and their feud “was taking away” the other men’s time with Rachel.

Dean agreed, “I think Lee made a point to badger certain people” and took away from other people’s experience with Rachel. Adam chimed-in that the two men were playing a game of cat and mouse. Adam said Kenny may be the “mouse” but Lee is the “pu**y”

Kenny was the first one in the “hot seat” where he took a seat next to host Chris Harrison who asked Kenny if he didn’t have a chance with Rachel because of Lee? Kenny answered that it was “a challenge” because the Lee drama happened when things started getting romantic with Rachel. Harrison asked about when Lee labeled him as “aggressive”. Kenny replied that years ago, at a younger age, he would have handled Lee differently. However, currently he is a father and has to be responsible about the things he does and says.

Lee apologized to Kenny and admitted that he should have been “a better friend. For that, I apologize” said Lee. Back to the topic of fatherhood, Harrison surprised Kenny by reuniting him with his daughter McKenzie whom he hadn’t seen since his time on the show. When Harrison asked how difficult it was to be away from McKenzie, Kenny cried and said “you can see how amazing this beautiful young lady she is.” He reinforced that he wanted to find someone (like Rachel) just as special as her for her. 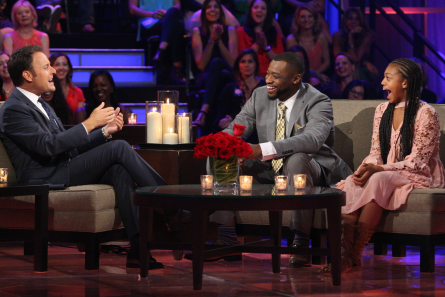 It was also Kenny’s birthday the same day as “The Men Tell All” episode. On behalf of the show, Harrison gifted Kenny and his daughter a trip to Disneyland.

Lee tried to excuse his offensive actions and comments by saying “I made jokes when I’m uncomfortable in inappropriate times.” He explained that it comes off wrong. After Kenny got reactions from his friends who watched the show and told him that that’s really his personality, Kenny asked Lee if that was really his personality that he brought to the show. Lee said he was on the show to meet Rachel. But, learned that there were some things that he needed to fix. Lee reiterated this statement throughout much of the half hour of the show that was devoted to him.

Diggie observed that it’s very interesting that everyone’s common enemy is Lee. Dean pointed-out that Lee was advertising himself on Twitter and that Lee should have apologized two months ago. Now, he feels it’s out of convenience that Lee happens to be apologizing because he’s in the spotlight on TV.

One of the things that Lee wrote on Twitter was brought to light by Harrison which was a Tweet Lee made comparing the actions of the NAACP to the KKK. Again, Lee responded that he has “a lot to learn.” Kenny called Lee out – ” If you didn’t get caught, would you be sorry?” Josiah asked Lee why would he come onto the show knowing that the Bachelorette this season is black. Lee ensured that he isn’t a racist. “I don’t like racists,” said Lee and he didn’t intend for the Tweet in that way. 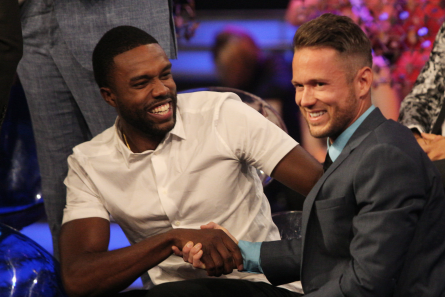 Lee apologized to the men for things he said . “I’m sorry for saying things when I was not educated” Lee told the men and denounced his Tweets. Kenny reacted that he wants to set a good example for his daughter. Thus, all the stuff between him and Lee is now in the past. The two men hugged it out.

Harrison noticed Dean and Rachel’s immediate connection from the start. Dean was one of the men brought onto the “Women Tell All” live preview show of Rachel’s season when he said to Rachel that he was “ready to go black, and never go back!” Harrison asked Dean what was the disconnect at the end? Dean didn’t think that there was one and said he had feelings of falling in love with Rachel. When asked about his dismantled hometown visit, Dean responded that he wanted Rachel to see the “real side” of his family before jumping-in and getting engaged. He hadn’t spoken to his father for two years before that. Dean called his hometown visit the ‘realist part” of his whole experience on “The Bachelorette” show. 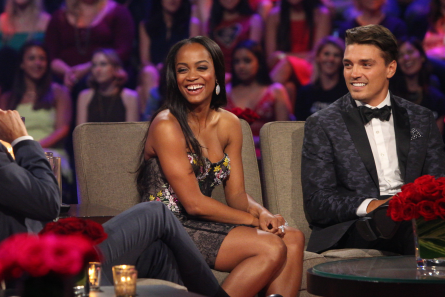 Dean credited the experience he had with Rachel allowed him to open-up more than anyone else. Then Harrison confirmed with Dean that he’ll be on “Bachelor in Paradise” show this summer.

Rachel said you can’t prepare for the men you’re going to meet. Sending Dean home “was really, really hard.” Dean asked Rachel why did she tell him that she was falling in love with him, then sent him home? She told him that she meant it. Dean let her know that, that statement made him feel heart-broken even more. Rachel said “I did love you. I was falling in love with you.”

Harrison asked Rachel about DeMario. Rachel’s response was classic – “DeMario who?” When DeMario’s girlfriend showed-up at the basketball game, Rachel said she wanted him to “just be honest.” At that point “I’ve dated DeMario before…I know a bunch of DeMarios,” exclaimed Rachel to Harrison and to DeMario.

On being the first black ‘Bachelorette, Rachel said race wasn’t an issue when she was going on the dates with the men. One of her disappointments she said was with Kenny in how he handled the Lee debacle. He (Lee) was “just background noise,” said Rachel. On Lee’s Twitter comments, Rachel responded directly to Lee, “I’m in such a unique position and have the chance to be a spokesperson for African-American people and women.” Rachel explained to Lee how he missed his opportunity to learn about different cultures from the mix of men in the house. She offered Lee lessons on black history and women’s’ rights. Lee reacted “I want to apologize to you. I didn’t take that initiative to learn.” Rachel angrily accepted his apology.

The two men who were left right before the hometown dates, but never went on any one-on-one dates with Rachel were Adam and Matt. Of course, they had questions for her. Adam told Rachel that his feelings started to develop for her. She said she wished that she had more time with him and Matt. Rachel said she felt that she didn’t want to make it more intense by taking them on hometown dates. She told Matt that he was not brought that far by accident because America didn’t get to see everything that happened with them.

To wrap things up, Rachel’s old classmate, Fred, was on the show and told her that out of all the guys, he was the guy that already had feelings for her. He said he wished that their reunion had gone smoother than it did and ultimately he’s happy to see her happy. The guys gave him big kudos for his gesture.

NEXT WEEK: The live final of “The Bachelorette” will be a three-hour long episode that will air Monday night, August 7 on ABC. 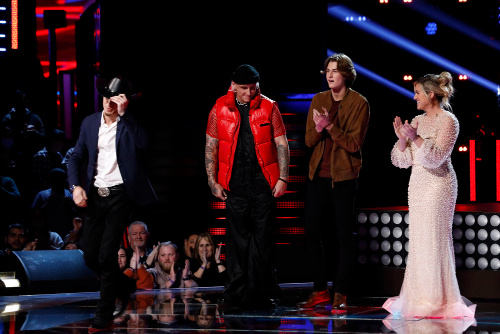