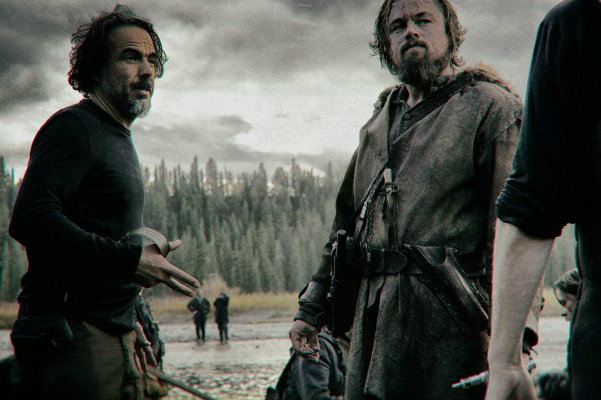 In early America, fur trapper Hugh Glass (Leonardo DiCaprio) joined a a fur-trapping expedition led by Major Andrew Henry (portrayed by Domhnall Gleeson) in the summer 1823. Although Glass’ real journey started out in August, The Revenant’s re-telling of it all took place in the winter.

“The Revenant” brings to mind feature length documentary “Nanook of the North” directed by Robert Flaherty about an indigenous family surviving the frozen landscape of the Great White North.

During this expedition is where Glass was horrifically mauled almost to death by a grizzly bear along the banks of the Missouri River. “The Revenant” director Alejandro González Iñárritu’s filming of the scene has become one of the most talked about movie sequences in a long time.

Glass amazingly lived after the bear attack, and even more amazing, survived after his team of men abandoned him and left him for dead inside of a shallow grave without any weapons or tools for survival. That’s when Glass used his smarts and skills as a mountain man to trek all the way back to civilian and using nature to heal his wounds along the way. The motivation for Glass’ forging on is a bit different in the movie than real life, but Iñárritu captured the essence and speculation remarkably well.

One of the best lines and most profound moments in the film, also wraps-up the meaning behind “The Revenant” when DiCaprio’s character makes it back to his team and tells Henry “I’m no longer afraid to die…I already did it.”

Actor Leonardo DiCaprio and director Alejandro González Iñárritu took time out on Saturday, January 9th for a special Screen Actor’s Guild (SAG) Q&A session after a screening of the film moderated by an Access Hollywood reporter.

In reality, before there was Iñárritu’s “Birdman” which won him the coveted Oscar award last year, there was “The Revenant”. Four years before “Birdman”, Iñárritu was looking for locations for “The Revanant”. Early production started five to six years ago.

Iñárritu said he did “Birdman” in the meantime, and Leonardo did “The Wolf of Wall Street”. DiCaprio said he knew when talking to Iñárritu that there was something existential about what Iñárritu wanted to do with the film. DiCaprio stated that he thought of it as neo-realism or docu-drama. He knew it would require being put into real situations and extracting the meaning as he lived through it.

Iñárritu explained that it’s one of those films where less words are spoken. It’s a story about space and time. “The Revanant” is a story that takes place in the outdoor, harsh winter elements in three different vast lands, trees included. Iñárritu said it was hard to shoot a horse and trees. “You have never seen a tree in any of my films (laughter followed). He said “now there’s trees everywhere!”

DiCaprio said the action in the film propelled the drama and the character. The challenge of taking on a character with so little to say. He said he wanted to say less. He also recounted a time while working with director Martin Scorsese on “The Gangs of New York”, Scorsese told him he had the same ability as silent film stars to express himself without words.

What DiCaprio learned from Iñárritu is to trust in someone’s very unique process. “He asked us to do things that were never done before,” said DiCaprio. They would rehearse for a full day. On the actors, Iñárritu noted that “few people can do what they did.” 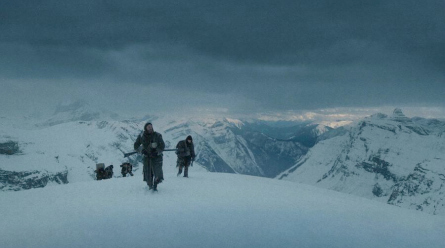 “THe Revenant” shot in extreme climate in all natural light.

Iñárritu said the film required the opposite of what actors learn – to be aware and present at the same time. “The Revenant” was filmed in ALL natural light. So, every day was a race to get their need footage. “The fact that we had one to two takes forever was fearful. You feel that fear,” said Iñárritu.

MAKING OF THE BEAR ATTACK SCENE: 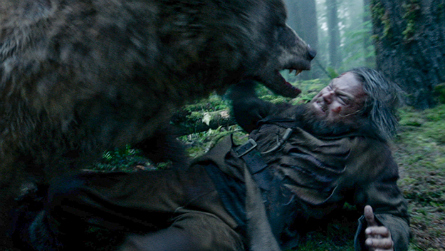 DiCaprio described Iñárritu making “The Revenant” “like painting a master canvas.” The question that gets asked the most? How did Iñárritu shoot the famous bear attack scene? Iñárritu responded “to explain how we did it, it will ruin it. That’s our job, to make-believe.” But, he did say it was shot in a real place in British Columbia in the middle of nowhere. “It was all Leo” he said, along with “every trick imaginable in cinema was used here.”

DiCaprio said in the bear scene is where having the advantage of having time to explore really helped. It was almost a month of rehearsals alone for the bear attack scene. Iñárritu said they took away the human characteristics while filming the bear scene to make it seem like a monster. “The most underestimated thing (in a film) is tension,” said Iñárritu

The moderator credited Iñárritu by stating, “as history of cinema unfolds, people are going to be talking about this sequence. DiCaprio recognized his acting teacher Larry Moss, whom some other actors in the room were familiar with. DiCaprio said “the more you learn to immerse yourself as an actor, the more you trust.”

DiCaprio also said it was Iñárritu that pulled him into the film. Iñárritu said “I have a life, not a career and life is dictating me on what to do.”

In portraying Hugh Glass, DiCaprio ate a raw liver, slept inside a horse carcass, wrestled with a bear and withstood extreme cold weather. Was there anything that he wouldn’t do for this film? DiCaprio responded, “I didn’t get hurt making this movie AT ALL.” He said it was about getting warm and getting a good meal.

At The Golden Globes, during his Best Director acceptance speech, Iñárritu thanked his cinematographer, “the master of light, obviously.” He told DiCaprio, “Leo, you make the best experience in my life. The best in the world.” He also thanked the Native Americans who were in the film.

After winning his Best Actor in a Motion Picture Drama award, DiCaprio said more than anything, he learned trust while making the movie. “I’ve never had an experience like this in my entire life. What the crew went through was unfathomable.” He also noted that in real life, Tom Hardy would never leave him and bury him to die. “I want to share this award with all the first nation people in this film and all the indigenous people around the world,” DiCaprio ended.