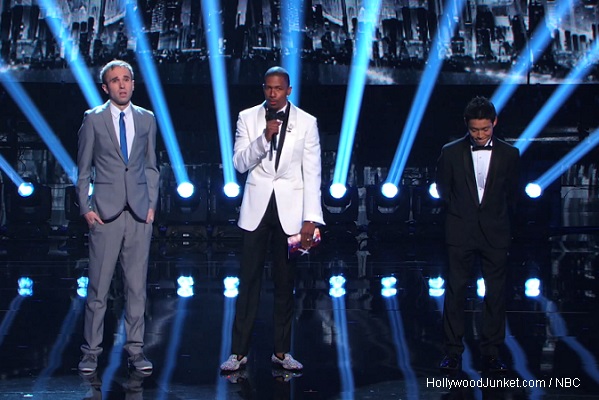 It was an emotional night on the season 8 finale show of “America’s Got Talent”. A season which veteran judges Howie Mandel and Howard Stern said repeatedly was the best season showcasing the most talented acts that they’ve have seen on any season of the show. 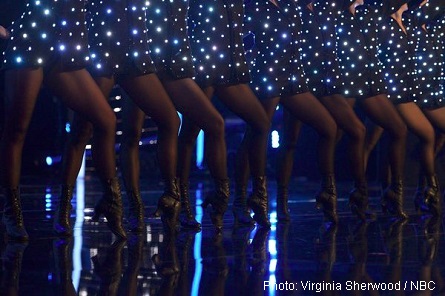 Pictured: The Rockettes opened the show.

Howie said at the opening of the show that there’s only four words to describe it – “Amazing”. He clarified that he was speaking for all four judges. The Rockettes came back to perform an opening number for this season 8 finale show. On Tuesday night’s final performance show, “the finalists gave the biggest performance of their lives” said host Nick Cannon.

Kenichi opened a breath-taking opera performance by Il Divo with Heather Headley. One of the singers from Il Divo told him he has great poise and reminds him of Michael Jackson and thinks he’s amazing.

Q & A with Taylor Williamson and James Lipton 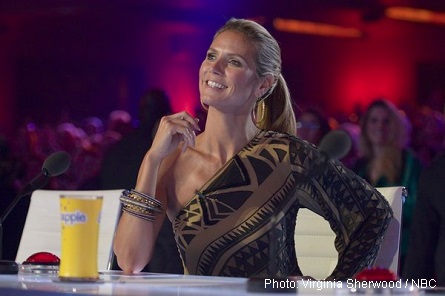 Lipton finished his set by telling host Nick that he “is the unsung hero on this show. He’s the man in the front line willing to do anything for America’s Got Talent. Take a look.” The show aired a highlight reel of flashbacks of Nick’s participation on some of the wild stunts and crazy audition acts. One of these acts was Tummy Talk where Nick contributed his body to be played upon by the unusual comedic and musical act. Nick said he’s been thousands of feet in the air. He said America’s Got Talent is the best job he’s ever had. “I’m having fun and watching people have their dreams come true.”

Forte sang with Josh Groben. Josh said, “I’m so happy we were able to have this full circle moment. Thank you for having me here.”

Before it was announced who would be going home in sixth place, judge Howard Stern said he wants to applaud all of these performers “They have given us a show like we have never seen before.”

After Earth, Wind and Fire performed, the first act to be eliminated was looming. The winner of AGT will be on the Today show and Jimmy Fallon. America voted the act finishing in 6th place is Cami Bradley. Howie who has been a big supporter and cheerleader of Cami’s he told her, “Don’t listen to Nick when he says the dream comes to an end. This is just the beginning. You are a star.” Nick said I agree with Howie. I was just reading the teleprompter.

Nick announced that the night’s winner of AGT season 8 will be on Today show and Jimmy Fallon tomorrow. The next person to be eliminated was magician Collins Key. Key said, “By no means the end of the journey.” Howard was proud of Key and said, “Cool calm, collected and he’s only 17! The world is your oyster. You did a wonderful job!”

Forte was the next act that did not garner enough of America’s votes. Forte went from going from complete strangers to competing on this sage. The said it is a dream come true. Heidi said, “I am a huge fan I’m so sorry I will follow you guys wherever you go. I’m so sorry.”

Howie said “We’ve never had a finale like this. Taylor, your life is changed forever. Kenichi good luck! Taylor said, “I already won. But I’d like to keep winning.” 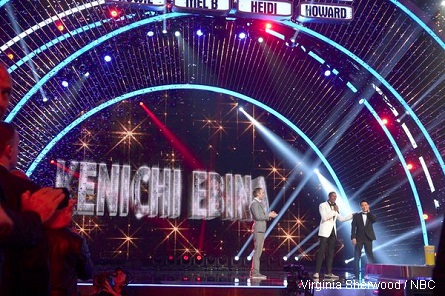 Pictured: Kenichi Ebina is announced as the winner!

The last two contestants standing were Kenichi Ebina and Taylor Williamson. The winner of the $1 million and the new star of a headline show in Vegas – all part of the AGT grand prize is Kenichi Ebina! He said he thanked the support of his family. “This has been so amaizng and it’s such an honor to be here. Thank you for making my dreams come true,” said Kenichi.

Howard said, “Kenichi this is why AGT is great. We discovered a superstar. Both of you are stupendous. and America got it right!”