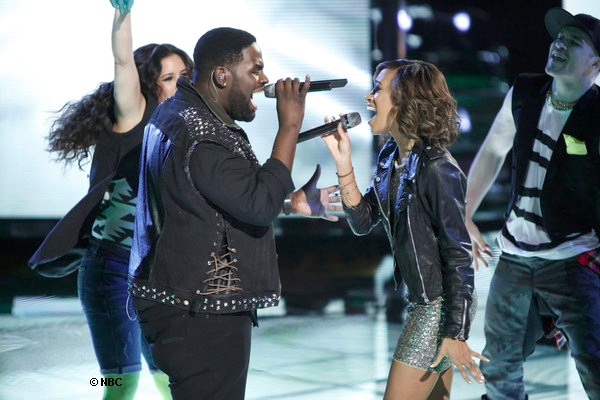 Only eight singers remain in NBC’s “The Voice” competition. They all came out onto the stage to hear what America’s fate has sealed for them. The two with the lowest votes are eliminated and sent home. The final eight are: Trevin Hunte, Amanda Brown, Cody Belew, Terry McDermott, Cassadee Pope, Nicholas David, Dez Duron, and Melanie Martinez.

The final eight, full of hope and talent stood before the coaches to hear their thoughts. Host Carson Daly reminded coach Adam Levine that he weeded-out two shoe-in picks for the final two to be Amanda Brown and Trevin Hunte. Adam tried to back-pedal by responding with, “I happen to mention those names, but they’re all capable of winning.”

Cee Lo said, “win lose or draw – as long as these artists become happy and healthy and get something out of this experience. Everybody wins.”

Christina commented on having only one artist, Dez Duron, left in the competition by saying, “Get record deals and remain strong. Really not about the competition between the coaches. It’s what the singers take away from the show. Chris Mann came in fourth last year but has gone-on to have the most commercial success.. win. lose or draw, I have no worries.”

When asked about winning “The Voice” competition, Nicholas David said, “It will bring our family to a new level and give our family more time way down the line.”

Cee Lo Green performed “Bein’ Green” with Kermit the Frog. Trevin said, “Never in a million years did I think I’d get the chance to perform with the Muppets!” As the duo of Kermit the Frog and Cee Lo sang, there was a Muppet version of Cee Lo that sat in his coach’s chair. Other coaches chairs were taken by Fozzy the Bear, and Animal. After the cutesy performance, Daly plugged Cee Lo’s new Christmas CD called “Magic Moment”.

Back to the eliminations. Daly talked to Cody Belew about his comments last night on his struggles and everyone telling him ‘no’. Cody said, “When you dream big there’s going to be a lot of people that tell you no. But I had to believe it. Everything’s possible and I’m proof of that.”

Nicholas David saved (Team Blake) His elimination leaves four – Terry, Dez, Trevin and Cody. Two will be saved. Two will go home. Before the final reveal of who is staying and who is going, Carson Daly asked Cee Lo what his last words were. Cee Lo said, “I hate the words ‘last words’. I enjoyed my time with you. Thank you for your energy, your sacrifice and commitment.”

Christina had some words for her last singer on her team, Dez Duron. “This show does not define who you are. If you don’t make it through, there is more to come for you. You will always be on Team Xtina and I will always support you.”

Blake said to his team member Terry “I hate putting you in the bottom four. It almost gave me a heart attack. But, America loves a Scottish accent.”

The Final Elimination – revealed that America voted to keep Terry and Trevin. The two that were out of the competition were: Dez Duron and Cody Belew.