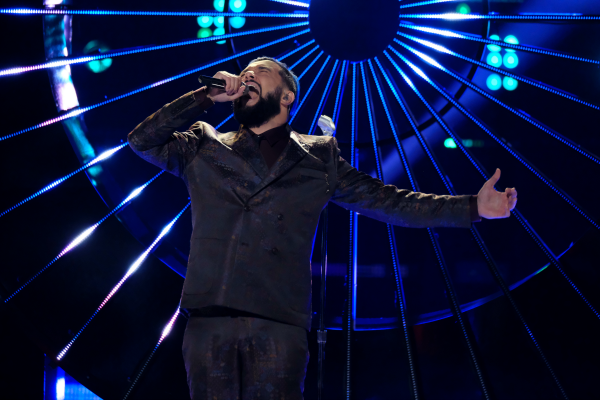 Viewers saw an array of impressive performances from some stand-outs that included Katie Kadan, Will Breman, Hello Sunday, and Rose Short. Artists got to invite guests from their lives who’ve inspired them to come see their performances this week. This included family, friends, and significant others. Team Gwen’s Rose Short opened the show with a power-house performance of a Country song.

Rose brought two important people with her to this week’s rehearsal – her mom and dad.  Rose said she’s always loved Country music and she’s singing Blake Shelton’s “God’s Country”.  Gwen said “we are going to win ‘The Voice’ singing Blake’s song.”  The song is pop, rap, country, all the things that Rose is.

Blake commented that he loved how it opened and “all the over the top stuff” was that the same song? Lol  Kelly said “it’s a huge range of a song” and thought it was incredible.  Kelly called it perfect and classy, yet stayed to who she is as a singer.  Gwen told Rose she looks stunning, and it feels so meant to be and how the song came about.  It was Rose’s mom’s idea for Rose to sing the song.  “I’m just so proud of you” Gwen finished.

John Legend opened his home to his Team to come over and spend Thanksgiving with him and his family.  John gave Marybeth the song “Lose You to Love Me” by Selena Gomez.   Her current boyfriend, Christian, was invited to watch her perform this week.  John said he loves seeing this side of Marybeth, dark and sensual and the key is to interpret that vocally.

Kelly called it “very powerful” because it was like a secret, then slowly let us into her performance.  Gwen stated that she was “floored by that” because those kind of songs are very specific to the artist. But, Marybeth “made it so good.   John said he was so happy watching that because she built the story.  He said it was her most artistic performance she’s given on the show so far.

Kat said she was discovered via YouTube and was called into the show.  Her life has done a complete 180, she said.  Blake said he’s glad that she’s getting back to the Pop/romantic song because it’s believable.  Blake said he could be having the worst day, then listen to Kat’s voice and it turns around.  He called her voice “one of a kind.”  Blake said America love Kat so much because she’s literally and “undiscovered treasure” and knows she’ll knock the performance out of the park.

Gwen called Kat “magical” and you can actually hear “the air” in her voice and “nobody is like Kat.  John said he loves that every time she does a song she makes it her own, and he compared her to Will. He said she does it so beautifully, with so much taste.  Blake said he’s running out of compliments and that’s his new favorite performance from her.  Blake compared her to a singing angel from a Christmas tree.

Shane Q had to sing for the Instant Save vote last week which he won out to Myracle who went home. Kelly advised Shane to sing like it’s his last time.  This week, Shane got Billy Ocean’s “Caribbean Queen” song.  Shane said his dad used to perform the same song and even put it on a cassette.  His dad got flown-out to watch Shane’s performance this week.  Shane said Kelly made it Bluesy and “it turned to magic.”  She added a guitar solo to the performance.  Kelly said with Shane being in the bottom last week, you think he’d pick a safe song. “Not Shane.”   She said if Shane keeps with that confidence, he’ll make it.

After Shane’s performance, host Carson Daly stated that it’s like 1984 again.  John said he sees Shane growing every week and got Michael McDonald vibes.  Kelly said Shane chose the right timing to come out of his shell.  “I love you on stage” and love seeing that he can do physically that he can do vocally.  She added that she loves his random riffs.

Kelly said it’s the second week in a row that Jake is in the Top 10 streaming artists.  Jake said his cousin, Colton was killed in Afghanistan. They used to get together and sing Country songs.  Jake got a special congrats from the military.  Jake sang “That Ain’t My Truck” by Rhett Atkins.   Kelly said she’s happy to hear Jake do an up tempo song.  Kelly said Jake can be “a massive Country star.”  Kelly called it “Garth Brooks magical” during Jake’s rehearsal. Colton’s family was in the audience to watch Jake’s performance this week.

Gwen called it Jake’s best performance he’s done on the show.  She said tonight he was so relaxed and really believed that he’s a true Country song.  Ordinary guy with and extraordinary voice.  Blake said he loves that song.  “As hard as it is to say, Kelly is doing an incredible job” and told Jake that he’s killing it.  Kelly reacted to Blake’s comment that “Hell has frozen over!”   Blake said he’s been drinking.  She said she’s not doing anything and Jake’s family is going to be so proud and it’s like they’re watching Jake’s show.

Pop singer Joana is the youngest in her family at 16 years old.  She said her siblings are her biggest supporters.  Joana sang “Impossible” by superstar vocalist and former ‘Voice coach Christina Aguilera. Gwen said Joana hasn’t shown this side of her yet and it’s really about vocal Olympics and dynamics. “Everyone’s really talented, but nobody is you” Gwen told Joana.    Gwen said it’s a good time for Joana to “show her chops   Gwen said Joana is only 16, but her voice is quit serious and it’s a good opportunity for her to pull out her power.  Joana said she gets more comfortable on stage each week and finding herself as an artist.

John Legend said Joana is “just owning this moment” and loves the high notes that she’s hitting.  He said her confidence, poise, and maturity is so beyond her years.    Gwen  said she has to keep reminding herself that Joana just turned 16 last week.  Gwen was impressed by Joana and added that it’s a dream come true to watch Joana grow before her eyes and she “man handled the stage…unbelievable.”

Katie loved how John Legend made his home their home when he welcomed her and the rest of the Team to his home for Thanksgiving.  John said his first job was at a music store where he cleaned instruments.   Katie got “Rolling in the Deep” by Adele.  John said he doesn’t worry about Katie making it, he worries about the music industry catching-up to Katie.  “This is her moment and she’s seizing it.”  He said America will see her tender heartened and also her “bad-ass” side with this performance.  Katie cried that she doesn’t have to “hide anymore” she can be her.

After Katie’s performance, the audience couldn’t stop cheering.  Blake was taken back, “this can’t be real, this can’t be really happening on this show right now… there’s no way that  somebody is this good that hasn’t made it in the music industry.”  Kelly said Katie lights fire and makes everyone happy.   She added that it’s not just her vocalbility, but it’s her voice inside.  Kelly added that she loves Katie’s growl.  John said they were rehearsing the day before Thanksgiving at his house.  His family flew in and when they arrived, the only person they wanted to meet was Katie Kadan.  John said when he went to Target in Palm Springs, a woman walked-up to him and said she was just thinking about Katie on his Team!!

Hello Sunday got the song “Stone Cold” by Demi Lovato.  Kelly said it’s kind of a dark song for them.  Chelsea from Hello Sunday said it’s about overcoming they struggles in the past..  She elaborated that she’s been dealing with type 3 diabetes.  Kelly said they’re only 14-years-old so people don’t think they can have that emotional connection.  During their rehearsal, Kelly cried.  Then, Hello Sunday broke-down.  Kelly said she’s 37 years old and she breaks down on stage all the time but its because she has “all the feels.”   Hello Sunday stated that  “we’re kids but we go through things too.”

After their performance, Kelly reacted, “that was so beautiful” and “a lot of people don’t know the depth of the conversation that day…well done” as she fought back tears.

Soul rocker Ricky Duran.  Ricky had tears of joy last week upon making it to The Voice Top 10.  Blake told Ricky to promise him that these next three performance, just swing from the fence.  Blake told Ricky that he shouldn’t feel pressure, he should feel opportunity.  He said the song speaks to him after losing his father to suicide, then his mother when she got sick.   It’s a performance healing, Ricky said.   Blake said Ricky is so believable and reminded him to “hit a big note” somewhere in the song.  Blake said Ricky is an amazing guitar player.  Ricky said the first music he fell in love with was the Blues, and used to listen to the three Kings – B.B. King, Albert King, and Freddie King.  Ricky sung an Albert King song for his Top 10 performance.  His sister reacted that mom and dad would be so proud.

John wished that Ricky was on his Team and not Blake’s.  John continued by stating every week, Ricky shows us that he belongs there. He said Ricky will go far because he’s an exceptional artist.  Blake challenged people to rewind that performance and try to find anything wrong with it!  Blake told America that if this guy doesn’t belong in the finale, “I will kiss your collective butts!”

Will was floored that they got to go to John Legend’s house.  John played on his piano while will sang.  Will got the song “My Body” by Young the Giant.  Will asked John what was the best song-writing advice he’s received.   John said he just developed a method that was right for him.  Will said there is still so much he wants to learn from John Legend.  John played the song on the piano while Will sang.  Will said it brought him back to performing in high school when he sang in a metal band – “metal screaming” Will called it.  John said Will shows a full range of things and still makes the songs his own.

After Will’s Top 10 performance, Kelly told him to just let her know where he’s playing after the show and she’ll show-up. She called it incredible and it was HIS show and everyone opened-up for him.  Gwen was reminded of back in the day when everyone toured together.  “The music lives inside” him and he has to get it out.  Gwen called him electric and unique.  She’s excited to see what he does next.  John said Will has shown so many sides of him.  This was his favorite performance he’s done because it’s so electric and that song was so perfect for his voice.  He controlled it in a beautiful way…”it was masterful.”

Meghan Trainor will be on “The Voice” Tuesday night.

“The Voice” Tuesday’s results show featured a performance from Meghan Trainor. At the end of the night, after the Instant Save votes were tallied, season 17’s Top 8 was revealed.