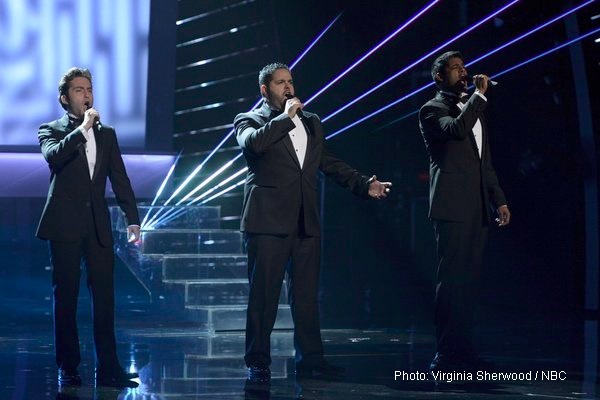 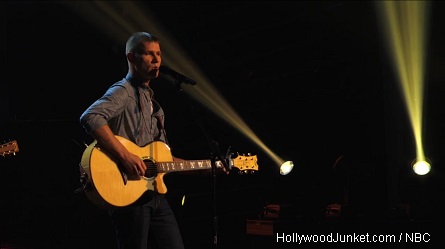 His encore performance was him singing “Coal Keeps the Lights On”.

Howard said Rose’s performance was a great opener to the show and his performance “conveyed emotion.” Heidi told Rose, “I think America fell in love with you from the start”

Mel B. said, “I love your voice. America has to vote for you.” Howie commented, “I think you delivered beautiful sound”

After his encore performance of Robotic Dancer Remixes His Matrix-Style Routine, he received a standing ovation from all judges. Howard said, “You have gotten even better,” and encouraged viewers to vote. “Is this man not a superstar? Vote for this guy he deserves to win.”

Heidi said called him her “most favorite act of the entire season.” Let’s hope Taylor didn’t hear her say that! Mel B. stated, “I am so glad we all got to see this again, you are a genius” Howie said, ” You did what you did but you did it better. You deserve to win!”

The Best and Only Unique Sound

After her encore performance of “Believe,” Bradley also got a standing ovation from all judges. Howard said, “look at how you have blossomed. You have spread your wings.”

Heidi was a proud judge, “I am so proud of you. You put so much emotion in your singing.” Mel B. said she could listen to Bradley “for days on end.” She called her “a class act.” Cami is Howie’s well-known favorite and last week called her his “judge’s crush.” He said, “out of all the singers on the show you are the best, the only unique sound.”

The Master of Confusion

After his encore performance,  Howard told Key that he is a “terrific performer,” he thinks he has a great future. Heidi said, “My eyes were like full on focusing i am shocked I don’t know how you do it.”

Mel B. also didn’t know what to think and reacted with, “I thought that was great you are young and inspirational.”   Howie said, “You sir are the master of confusion!”

Forte gave an encore cover performance of “The Prayer”

They received a standing ovation from all except Howie. Howard said, “I always thought you guys were the front runners.” Heidi’s reaction was, “I am a huge fan. If you win I will come to Vegas to see your show – loved it!”
Mel B. said, “Wow Stunning, I am now a big lover of opera. Despite his lack of a standing ovation, Howie said, “It was brilliant, but how does it compare to some one working alone.”

After his encore jokes,  Williamson got a standing ovation from Howie and Mel B. as the audience chanted “Taylor!” Howard said, “It is much more difficult to do what you do. You have a fully evolved character.” Heidi reacted to her new-found love for Taylor, “I did always like you and your banter.”

Mel B. said, “You are very very funny you are awkward and weird and I love it!” Howie’s comment was, “You added originality and you used the moment.”

Cami Bradley sang The Beatles’ “I Want To Hold Your Hand”. Howard reacted to her performance with, “A confident performer, this show was perfect for you and you were perfect for this show.” Heidi also thought it was a “perfect” song choice and performance.

Mel B. told her “flawless!” Her ultimate fan judge Howie said, “You sound like no other.” 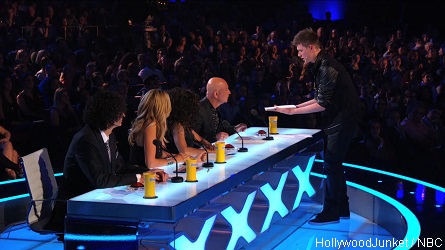 After Key’s magic act that included some tricky coordination of various strangers’ and judges Hashtags, he received a standing ovation from Mel B. and Heidi.

Howard said “I think you did your self proud tonight.” Mel B. reacted with “How do you bloody do it? I don’t want to know. I do believe in magic.”

Heidi said “You are very current the next generation of magic.” Howie’s response was “you are getting better,” and also said it was Key’s “clearest most concise performance ever.”

Howard said “I didn’t hear the knock-out punch, not as good as a song you wrote.” Heidi’s reaction was, “You give America what they want to hear. You don’t pretend to be anybody else. You stay in your comfort zone. It’s so beautiful.”

Mel B. said, “You are a great performer. Such a lovely guy really nice.” Howie was not impressed by Rose’s performance of Garth Brooks song, “I think the dynamics were missing, good but not great,” he said.

Williamson said, “I had no confidence going into the first auditions. I thought they were going to say, ‘we like seeing you and go home.’ I’ve been working at it for a long time and it’s nice to have this happen. The ten year struggle has not been a waste of time.”

Audience chanted his name afterwards. Heidi was the first to critique him. “When I first met you obviously I was very smitten. But I was also very confused by your jokes. When we went out on dates and you brushed my hair, I thought you are very bloody funny.”

Mel B. said, “You are just FUNNY! No other words. You’re just funny! That’s it.” Howie said funny is all he’s suppose to be. “People don’t know how hard that is. You deliver,” he said.

Howard was very happy with Taylor and said, “You really deserve a shot at this. Past seasons’ comedians just get overlooked. It’s time for a change. They don’t get through. You need to vote for this guy. Sometimes with the dancing and singing you want to fast-forward. With you, I don’t want to fast-forward. People should vote for you. You’re a contender.” 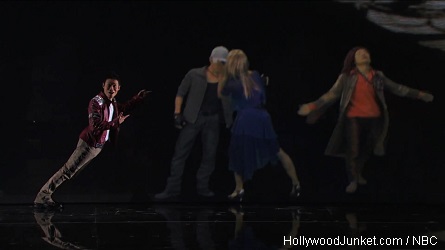 Kenichi said during his pre-performance interview, “I was telling my daughter that I made the final. She was so proud of me. It feels great. I love performing. I love the reactions from the judges. That gives me a lot of encouragement. I’d love to go back to my family as a winner of America’s Got Talent. If I won, I’d feel incredible.”

He received a standing ovation from all the judges except for Mel B. When Nick Cannon asked her why, she responded, “I think you are amazing but that performance was a little off. But for me that didn’t blow me away like you have done every single time.”

Heidi disagreed, “I think your creativeness is endless. You are a super-star. You’ve shown us so many things. If I could be at home right now, I would vote for you.”

Howard booed Mel B. and said her dislike for Kenichi’s act was due to “that hair” on her head has gotten to her. Howard continued, “This is so brilliant. Look at this guy. He goes home and creates what you just saw. This guy is mesmerizing. This is a celebration of Kenichi tonight, not AGT.”

Howie was overly excited by Kenichi’s final performance and yelled, “Every one of these characters is him. There’s more creativity that goes into Kenichi’s act than singing.” Howard had to step-in to calm Howie’s excitement down.

FORTE
Forte reminisced of “All of the rejection that we face has moved us in the right direction. You can never mentally prepare for walking out and seeing that auditorium full of people. It affects your performance in a different way. All the rejection of being told you’re just not good enough. And finally to be told that you are. I want to tell every singer who’s ever been rejected to never let go of that dream.”

After they sang a Luciano Pavarotti song, they received a standing ovation from all the judges. Heidi was the first to react with, “I have to tell you, I love this song, I grew up with this song. You three gave this song justice.”

Mel B. said, “What a way to end the show. That was just breath-taking.” She said they are like professionals and that it seemed like that have “been together forever.” Howie joked, “You delivered a brilliant song. You sang that better than Garth Brooks would have. You guys were great.”

Howard was all about Forte. He said, “It s about you guys. I don’t want to be negative You guys are so good. This is weird. You’re like the Crosby Stills and Nash of Opera. You guys harmonize. You are terrific.”

Forte responded by stating, “To sing this song, it sums-up the passion of what we have. To be in this moment right now, I was just overwhelmed.”

The season 8 winner of “America’s Got Talent” will be announced Wednesday, September 18, 2013 at 9pm on NBC.