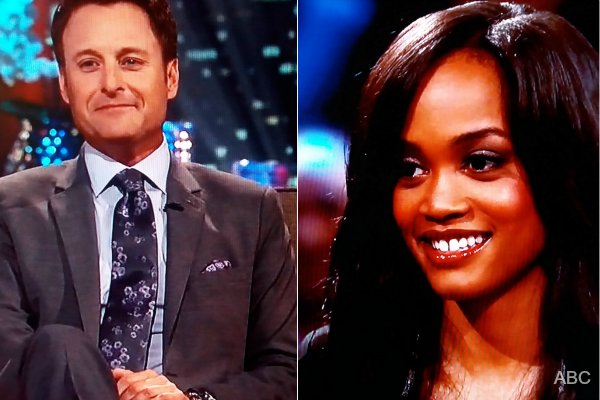 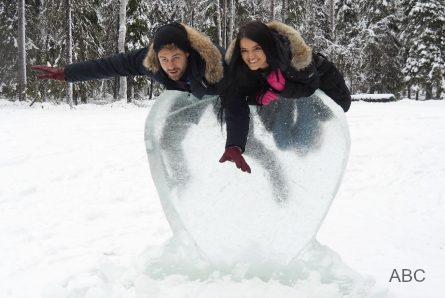 The traditional “The Bachelor: After the Final Rose” was laced with a promise of having “the most shocking, dramatic news in ‘Bachelor history” by host Chris Harrison at the start of the show. Then rest assured, that opposed to what everyone was thinking – that this drama must involve Bachelor Nick Viall in some way, Harrison hinted that the shocking news actually involved new Bachelorette Rachel Lindsey.

Nick came out to talk to Harrison about his successful Bachelor season ending. Not only did he break the spell of being rejected, Nick actually found love this third time around on the Bachelor franchised show.

Raven Compartmentalized on THE BACHELOR: 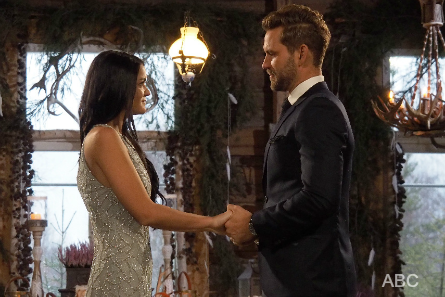 When Nick arrived back out onto the stage to re-visit Raven whom he last saw when he broke-up with her in Finland, Raven told him “in that moment I didn’t want you to think that anything that I said wasn’t the truth.” She said being quiet was the only way she could process it (the break-up). Raven confirmed that she was sure that Nick was going to propose and thought her and Nick were on the same page. Raven stated that she “compartmentalized” the situation of being on “The Bachelor”. She said she wishes no ill will on Nick’s relationship with Vanessa.

Harrison mentioned to Raven that “Paradise” is happening in Mexico this summer. Raven accepted his invite to “Bachelor in Paradise.” 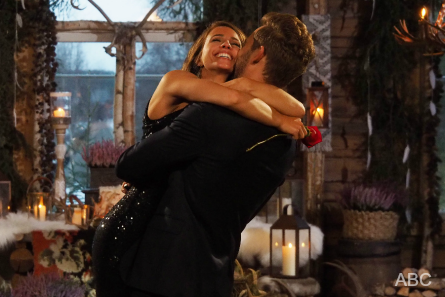 Vanessa said she wished that she had watched a previous season of “The Bachelor” so she knew what to expect. She also stated that she didn’t watch any of the over-night Fantasy Suite dates except for her own with Nick.

Harrison pointed-out that some time has passed since the final rose taping to tonight’s live show. What have her and Nick been up to? Vanessa stated that it was weird that they got engaged in Finland then had to immediately say goodbye to each other, and almost forgot to exchange phone numbers before they left. When they finally physically got together, Vanessa said it felt normal to wake up next to Nick and to make breakfast with him. The long distance from Nick, she said, has been tough. Because Vanessa speaks her mind, she’s not the easiest person to be with she admitted. She added that it feels like her and Nick are getting stronger as they go.

Any knock-down moments? “Yes”, Vanessa said her and Nick have had some disagreements.

Nick joined Vanessa on the stage and agreed that they have had struggles. But, they have “always come back and we’re realistic.” Nick said they want to make it work but have a long way to go. Vanessa told Harrison that she only wants to be engaged once and be married once. They’re optimistic and want it to work. Vanessa said she would indeed be okay coming to the states from Montreal and is looking into bringing her life from Canada and starting a charity.

The most important question of the night was will Nick participation in the upcoming season of “Dancing with the Stars” put pressure on him and Vanessa’s newly formed relationship? Nick replied ‘no,’ and that Vanessa has been supportive. There are obviously no resentful feelings on the subject from Vanessa. “I’m excited for this chapter in our lives that we are starting together,” said Vanessa.

This is Going to be Epic!

Host Chris Harrison promised that the show is about so surprise new “The Bachelorette” Rachel with something that will be “epic!”

Rachel came out and Harrison boasted, “the show works!” Such in the case of Nick and many others before him, people really do find love on these Bachelor shows. Rachel stated that she’s happy for Nick and she’s a believer in love and ready for herself now. “I try to take it day by day. With the fear, there’s also excitement,” stated Rachel. She confessed that the only thing that makes her nervous is that it might not work. What she learned from Nick’s season that she will take into her own is “I love how direct he was and how matter of fact he was. He went with his gut and I plan to do that as well,” stated Rachel.

The tough part for her will be the break-ups said Rachel. She told Harrison that she wears a different hat during the Rose Ceremony. The advice that she’s been given by friends and family is to always listen to herself. She’s shocked by the support she’s been getting as the new Bachelorette. People are just as excited for her as she is and that is humbling for her said Rachel.

Time for the epic surprise for the first time in Bachelor history! There was fifteen minutes left of air space. The surprise was to give fans a sneak-peek at Rachel’s season in a live format. Never been done before. Producers from the show had a backdrop brought-in that was a photo of the front of the Bachelor mansion. Then, what appeared on a studio monitor was a limo pulling up outside of the stage. 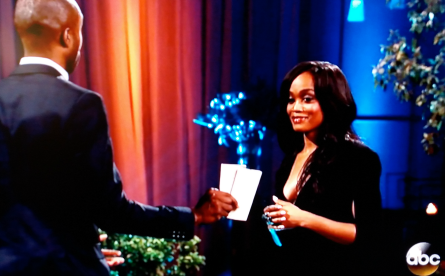 A slew of gentlemen (really, only four) arrived one-by-one via the traditional Bachelor limo. Harrison said after doing the show for 15 years, he’s even freaking out for Rachel who greeted that men and heard each one’s pitch for her. The first male was so sure they’d get engaged that he already purchased their ticket to Las Vegas to elope. One Caucasian bachelor said he’s ready “to go black and never going back!”

Rachel’s season of “The Bachelorette” starts airing on ABC in May, 2017.