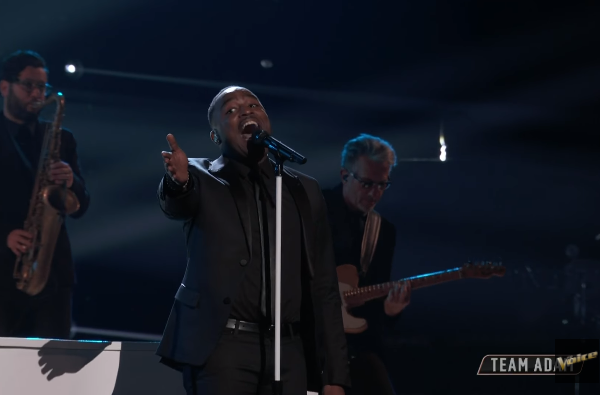 It was fans appreciation week on NBC’s “The Voice” for the Top 11 artists. Monday night’s show bridged die-hard fans, who were also in the audience, with their favorite ‘Voice artists. Number one fans of each artist introduced their chosen songs. Instant Save artist last week, Rayshun Lamarr, really upped his game on Monday night’s performance and most likely will land in the Top 10. Team Blake started-out the night with his artist Pryor Baird and also finished off the night with his other Country artist Spensha Baker.

“Night Moves ” by Bob Segar. Pryor said the song really hits home because he used to sing it. Kelly said her favorite thing about Pryor – “you CAN’Tteach being comfortable onstage” and comfortable in your own skin. Pryor has that. Blake was estatic because he said Pryor has a higher rank on iTunes each week and is gaining so much momentum.

Sharane dedicated her song to her number one fan and supoorter – her twin sister. She sang fan-picked song “Hero.” Alicia told Sharane that she feels a connection and “the level of confidence you excude is really profound.” Coach Adam said “full disclosure…I was afraid.” He said because it’s a huge song and he’s proud of her for attacking it and she “crushed it.”

Kaleb actually had sang his fan pick song, “T-R-O-U-B-L-E” when he was eight years old. Kaleb said he wants America to see the fun side of him.Former coach Blake reacted that he wanted to “jam” with Kaleb on stage and it’s his favorite Travis Tritt song. Coach Kelly said that song was on her list for Kaleb to sing because he has a rock-out country vibe and said Kaleb nailed it!

Jackie said her fanbase calls themselves the “Jack Pack.” She was inspired by classic rock growing-up listening to Pat Benetar and her dad’s other favorites. The fan pick took her back to her roots – The Who’s “Love Reign Over Me.” Adam reacted “all we ever really want is for people to find what they’re looking for.” He’s happy for her and said her version was very different from the original. But, “It was crazy” (a good thing). Coach Alicia said her fans do understand Jackie’s power and sensitivity and “that was sick!”

Jackie is Adam’s Country singer. She’s never done the fan-pick song before which was a full Country song “Strawberry Wine” by Deana Carter. Blake said “it’s so awesome to get these fan-picked song’ because it’s perfect for her voice and he would have never thought to choose that song. Coach Adam said Jackie is more dynamic and with a richer tone every show. She’s not only the best Country singer on the show, but one of the best singers Adam finished.

Blake took his team to a bar and said he started his career singing in bars. The fans gave Kyla Aretha Franklin song “Sweet Sweet Baby” (Since You’ve Been Gone’). Blake said Kyla is introducing the song to a whole new audience and she’ll give some “energy and sass” to the stage. “She’s going to slay this song” said Blake.

Alicia reacted to Kyla’s performance, “when a woman in a dress gets-down up in here…Kyla you are so phenomenal and so inspiring to people that they can own their own space. Kelly ranted and raved that Blake didn’t know that song! Coach Blake reacted to Kelly’s uproar, “you have to be able to recognize talent to hit your button.” He praised Kyla for coming from the background singing world to dominating the stage and the show.

Fans picked “Umbrella” by Rihanna featuring Jay-Z. Alicia had to contact Jay-Z to get permission for Christiana to sing it. Alicia reacted that Christiana “is so unbelievably lovable” and there’s no one on the show that takes a song and make it their own. 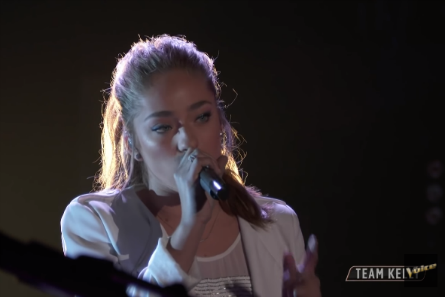 15-year-old Pop singer Brynn Cartelli sang Lady Gaga’s “You and I” with a bit more of a Country twang than the original. Kelly’s team got to meet Ellen Degeneres because Kelly performed on her show. Ellen advised the singers to be themselves. Kelly called Brynn “cool and captivating” and is in awe of her because she’s that good and so young. After Brynn Top 11 performance, Coach Kelly said the fans picked a big song and Brynn is so captivating, confident in her own skin that “it’s crazy.” She added that is her beauty and talent that keeps getting Brynn the votes.

Rayshun won the “Instant Save” vote last week. Fans gave him the song “Try a Little Tenderness” by Otis Redding. Coach Adam summed it up by saying this song empitomizes who Rayshun is as a singer and his spirit. He has a bit of Otis Redding in him. Rayshun’s fans are called “Rayshun Nation!”

Host Carson Daly reacted to Rayshun’s performance that the room was transported back in time. Coach Adam pointed-out that last week, Rayshun was in the Bottom Two. But, tonight, he’s number one and it’s the first time that all the coaches stood-up BEFORE the song was even done.

Britton’s fans chose “Perfect” song by Ed Sheeran who he dedicated to his girlfriend Olivia Faith whom he met at “The Voice” Blind Auditions. She was flown-out to see his performance this week. Coach Alicia told Britton that he “is not a joke.” There’s no bells and whistles. Just him and his passion and power. 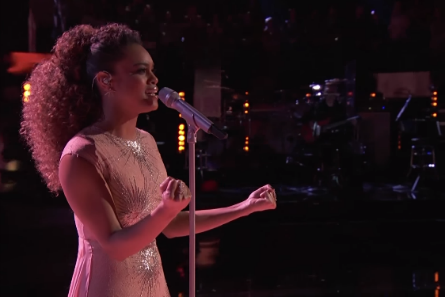 Spensha is Blake’s other Country artist. Blake presented his team each with guitars as gifts. Blake advised Spensha to enter the song as strong as she can. Her fan pick song was “Better Man” by Country group Little Big Town. Kelly reacted that she thinks its crazy how big Spensha’s voice is. She added that Spensha does such a great job at being soulful with her performances which is her favorite kind of Country. Blake said it broke his heart when she said she gave-up on music at one point. He said she’s so important to music and what she’s doing. 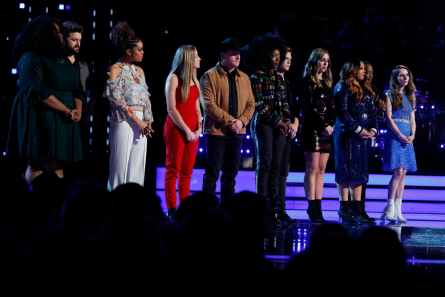 At the top of the show, “The Voice” Top 11 came out onto the stage to hear the first results of saved artists. Host Carson Daly announced that Pryor Baird was saved from Team Blake, and Britton Buchanan from Team Alicia. 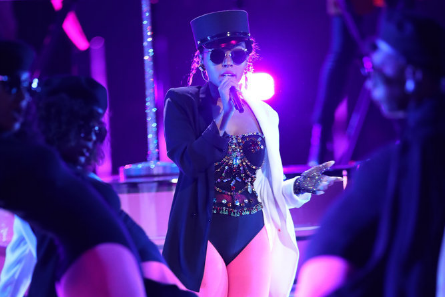 Jackie Foster was asked what the most valuable lesson that she’s learned from coach Alicia Keys. She answered she’s learned to always be her natural beautiful self and to always “feel everything” that she does.

Brynn said back at home, it’s a completely different experience and to have “The Voice” stage makes them stronger. Then, Daly announced the next group of artists who were saved by America’s votes.

Daly asked Christiana about showcasing her uniqueness. She said before the show, she performed in her room and is at a loss of words at how grateful she is. America saved Spensha Baker (Team Blake), and Jackie Verna (Team Adam).

Adam had his fourth Snap Chat win, who was there on the show. Then, Team Alicia peformed “Gimme Shelter” by The Rolling Stones. 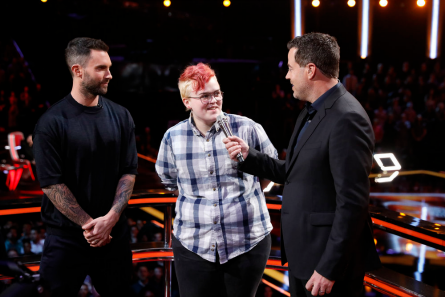 Daly asked Sharane about her family support. She said it means evertything and it’s incredible that her twin sister gets to watch her from the audience and experience it with her.

Kyla said a lot of people don’t know that Luther Vandross sang background and was glad to give back to the show what it’s given to her with her performance last night. 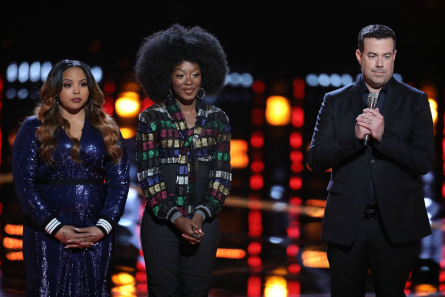 Sharane Calister (Team Adam) and Christiana Danielle from Team Alicia were left in the Bottom Two. Sharane sang “If I Were a Boy” as her Save Song. Coach Adam said he was so “sad and mad” that she’s in “the bottom.” Adam explained because, it never reflects anyone’s talent, it only reflects a pool of opinions in a moment. He begged the voters to give Sharane one more big moment.

Christiana sang “A Thousand Years” by Christina Perri. Alicia said Christiana gave goosebumps, and told America that “this work of art, you have an opportunity to save a one-of-one.”

Sharane thanked Adam for saving her and giving her the opportunity to perform on stage. Christiana thanked Alicia for pushing her and bringing things out from her that she didn’t know was there. Alicia said both of the women are so special and unique and no one is like her. She can’t be duplicated. “This is the beginning of such a crazy journey for you,” stated Alicia.

Adam told Sharane that he always gets frustrated at this point in the show. “It’s not a competition” It’s hard for him to see them on the stage and said Sharane does deserve to be there altough she hasn’t had that “magical breakthrough” that Rayshun had last week and believes she’ll have it next week.

Daly revealed that the Instant Save vote went to Christiana Danielle from Team Alicia.