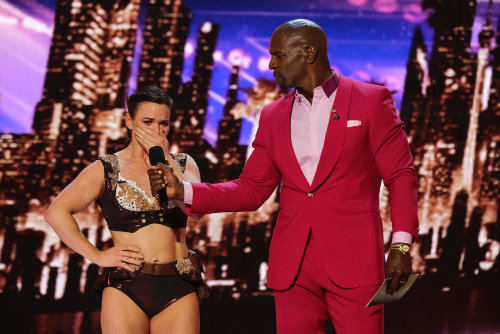 America’s Got Talent’s (AGT) biggest Results show yet this season happened during week five of the Semi-Finals.  This episode not only revealed the last two acts going into the Finals next week, it was also the night that the AGT judges – Howie Mandel, Simon Cowell, Sofia Vergara, and Heidi Klum had to each make their own selections of which act they would vote for as their Wild Card to be voted on by home viewers.  Whichever act won the most votes by home viewers in an Instant Save vote was the last and final act to round out the total number of acts going to the Finals next week.

Host Terry Crews counted down the night of voting results from least amount of vote to the most until finally arriving at the Top 5 acts.  Those Top 5 were: Kristen Cruz, Mayyas, Mervant Vera, Urban Crew, and Kristy Sellars. 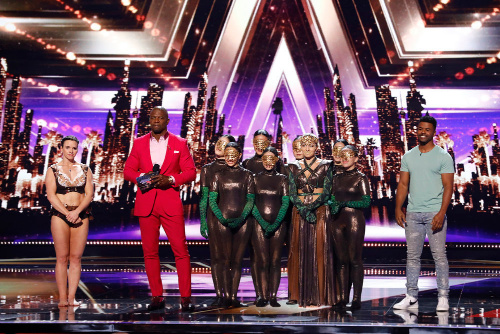 Heidi congratulated the acts and told them they were amazing last night.  Then, a video of past AGT winner Brandon Leake and judge Howie Mandel was shown.  Brandon Leake talked about how life changed for him after “America’s Got Talent.”  He won AGT season 15 in 2020 with his spoken word poetry.  He was Howie Mandel’s Golden Buzzer.  Brandon told Howie that he inspired him before he got on the show.  Howie told Brandon that he’s an example of dreams coming true.  Brandon said if he was competing today, he’d be nervous.

Back to the voting results.  Crew revealed the first act going into the Finals.  It was the Mayyas.  Sofia reacted to her Golden Buzzer act by saying she wasn’t surprised “because these girls have done an amazing job!”  The act who got the next spot for the Finals was Kristy Sellars.  Howie told Kristy that she’s a perfect example of what this Finals is going to be. “The most exciting and powerful Finals we’ll ever see,” said Howie.  Kristy was overcome with emotion as she cried on stage and genuinely didn’t think she was going to the Finals.

The show briefly played a video montage of the judges and host talking about the game play this season.  Heidi stated that instead of the 35 acts that are typically chosen for the AGT Live Shows, there were 55 acts chosen this season.  Sofia said because of the change in the format where nine acts go home each week, the acts are not holding back to the end, they know they have to up their game every time.  Crews said “it actually feels like a Finale every week.”   Howie said he is at the edge of his seat every week.  Terry Crews also said he never knows what acts are going through until he reads the card.  Simon said “whatever happens this year, guarantee it will be a better Final.”

The judges got to put forward an act that they thought should have made it through to the Final.  Simon said he loved this act’s audition, as well as their live performance.  His Wild Card was the Players Choir.  Heidi chose her Golden Buzzer act singer Lily Meola.  Heidi said Lily came in third place last week and was so close to making it. Before Howie revealed his Wild Card, he said he had three in his head that he was thinking of.  Howie said they have singers and dancers.  But, you can see singers and dancers on any show.  His Wild Card was powerpoint comedian Don McMillan.  Howie chose Don because ” laughter is the best medicine, and laughter is the medicine that America needs today!”  Simon said Howie is a sports person and sports people are really competitive and that’s what they want, really competitive people on AGT.  Sofia chose the ventriloquist act who was close to making the finals, Celia Munoz.

Next, AGT welcomed a special performance from musical act “& Juliet.”  Simon said “this is a musical like you have never seen or heard tonight.”  Simon said he was so excited to have them on AGT.  “& Juliet” begins on Broadway in October. They performed Katy Perry’s song “Roar.” 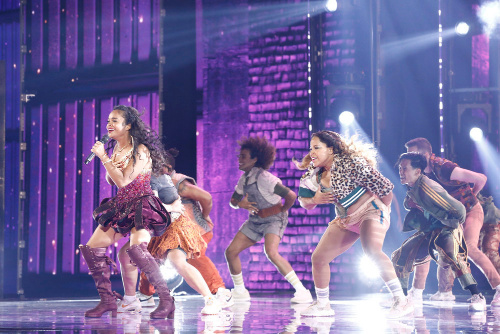 The Wild Cards chosen by the judges were: Don McMillan (Howie), Ceila Munoz (Sofia), Players Choir (Simon), Lily Meola (Heidi).  Terry Crews announced that he’d be calling the winner of the Wild Card.  He made that FaceTime call to Celia Munoz!  Celia was ecstatic and thanked Sofia Vergara profusely.  Sofia told Celia that she was so happy and they missed her! 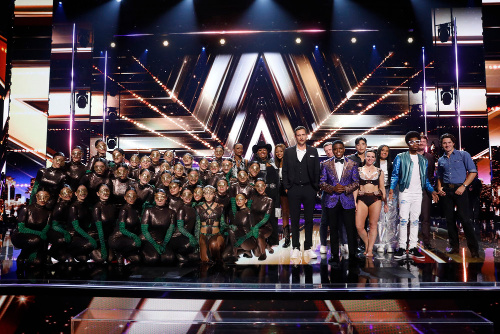