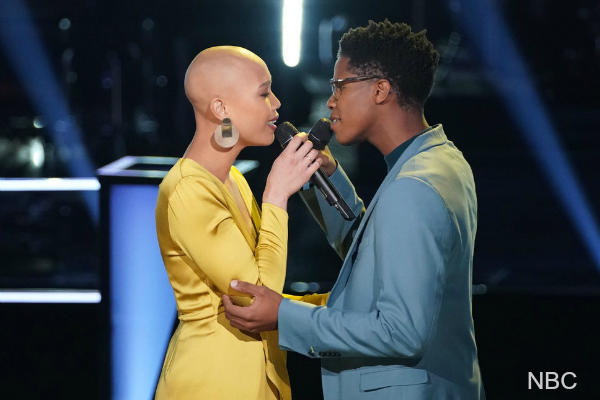 “The Voice” season 18 had it’s final week of the Battles round on Monday night episode.  Blake was the only coach left that was equipped with a Steal.  He called it “power on the show.”   By the time Blake used his Steal, the other coaches were excitedly happy, for the same reasons.

When asked about the progress of his Team, Nick told Carson Daly that everything went exactly as he planned.   His Team was up first in the Battle of Aeri Moon vs. Samuel Wilco.

Nick Blocked Kelly from getting Arei.  They got the song “Missing You” by John Waite. Nick said using their RB backgrounds to give the song “extra life” is why he paired them. Arei has the ability to take any melody and make it their own.  Kevin Jonas said when they come together you can “feel the tension in the song.”  Joe Jonas said it sounds good and what it comes down to is their performance.

Kelly called it “an even matched Battle” because they both have “full voices.”  Blake said Sam had this really big voice. On the flip side, Arei fills space with different runs and also called it an “even match.”  John said he felt joy from both of them and they were having fun. He gave it to Arei for having more power in her voice and connected with her more.  Coach Nick chose Arei Moon as the winner because, she was “awesome” and had this charisma and energy every time she performs.

Megan said she likes a mixture of RB and Country. Samantha said Kelly was her first choice to begin with even before Kelly Blocked Blake.  Kelly picked one of her favorite songs for them to sing which was “Top of the World” by Patty Griffin.  Kelly said Samantha is very polished, and Megan is not polished “in a really raw way.”  Dua said Megan really felt every word of the song and liked her husky voice.  Dua added that she wasn’t afraid to go for the big notes.

Kelly told them they want that tension to build in the song.  Dua loved their voices and the song.  She predicted the Battle will “be a really tricky one for Kelly.”

Blake said Kelly handed them a “scared piece of music” which says how much faith she has in them.   He commented that Megan’s voice is “unbelievable” and when he hears a singer with that kind of tone, thinks they can’t do all the other stuff.  But, she can and with strength and power.  Blake said with Samantha, he heard some moments where the pitch was a little under.

John said Samantha has a powerful, clear voice and what makes Megan interesting was her tone and the grit in her voice.  Nick said it felt like the song was HER story and her life.  He said Kelly has a tough decision.  Kelly said Samantha’s tone is pure and pretty and Megan’s tone is raw.  She said it was the best Megan has ever sounded.  The winner was Megan.

BATTLE WINNER:  Megan Danielle.  Kelly said Megan is a dark horse of all the teams.  She takes her nerves and uses it as fuel and she can see her in the Finale.

SAVE:  Kelly used her Save to save Samantha.  Kelly said Samantha is too good and can sing Pop, and Country really well.

Jon is doing music full time  in Nashville performing wherever he can.  Todd, has eight kids, said he’d love to support his family on music.  Blake gave them a Country song, “Ghost in this House,” that is sacred and under a microscope anytime anyone performs it.  Blake said this song was a huge Country song hit when he was in high school.  Bebe said Jon’s voice is heavenly and Todd’s voice you can feel the grit.  “It felt so right” said Bebe.  Todd said he planed to connect to the song by thinking of his wife Brooke in how they can be in the same place, but they’re not.

John said he felt a connection between them two and it was nice to see.  Todd got everyone to turn around..  Jon only got one of them to turn around, and after that performance, didn’t understand why.    Nick said it was a beautifully executed performance, and Jon blew them away.   Kelly is a fan of both of them.   Kelly said it’s based on who Blake connects with and who’ll be monumental.  Blake called it “an epic performance” and thanked them for making that happen.  Blake went with his gut and chose Todd as the winner.

BATTLE WINNER:  Todd Tilghman.  Blake said he had to go with Todd because he’s been incredible in every round.

STEAL:  Nick Stole Jon Mullins.  Nick promised to Steal Jon during the Blinds should he become available.  Nick said Jon has the ability to deep-root connect with his emotions, and “you can’t teach that.”

Zan was a three-chair turn. Brittney can sing Pop and Soul. Ella told them she didn’t have a manager and was singing into her phone with no hair or makeup done when she started.   John said he’s collaborated with people like Usher at the beginning of his career.  Zan sings back-up in an Indy Rock band. John picked the song for them because he wanted to hear two women harmonizing it.

Zan was nervous about Brittney’s powerhouse voice and had to think of how to stand-out.  Zan said she hopes people will feel her authenticity.  Brittney said she’s had stage fright her whole life which is why she closes her eyes on stage.   She plays music with her dad as well as gigs around at local bars.  John said Zan has “that haunting tone.”   Ella predicted it will be “an amazing Battle” and glad she doesn’t have to pick a winner.

Blake was the last coach with a Steal and had no idea who he was going to use it on.  He said just having it, “is power on this show.”

Nick called is “so unexpected” and what a great song selection.  He said they worked great together.  Kelly called is “so effortless and beautiful.”  She said they seamlessly weaved “this magical moment” and angry that she doesn’t have a Steal.  Blake said Brittney’s voice is “very pointed and clear.”  Zan had a better performance technically and would choose her.  John said everybody has been floored by this duet.  HE said Brittney has a powerful voice, and Zan has precision.  They both had a unique approach to the song.  He chose Zan.  John said Zan reminds him of Maelynn (his winner on “The Voice” season 16).

Kelly’s next Battle was Mandi vs. Sara.  Mandi the Opera singer, vs. Sara the Country singer.  Kelly thought they’d pair well together.  Kelly gave them “My Baby Loves Me” by Martina McBride.   Dua isn’t as familiar with Country which isn’t big in the UK.  Mandi was amazed by Sara’s control and tone. She called her beyond her years with the wisdom.  Dua said she loves the rasp in Mandi’s voice and her confidence.  Kelly told them she wants them to “bubble the whole song.”  Sara said Mandi is “such a power house” and will have to really work on the song to win this Battle.  Dua recommended that they give the audience all the energy.

Blake reacted that with Sara there were a couple of notes that she didn’t go for maybe because of nerves.  He told Mandi that she sounds good on a Country song.  John said he enjoyed watching them and Sara’s voice is piercing.  He said Sara sounded more like a Country singer to me.”  Nick said Mandi sold it for him.  She has so much variety in her voice and they continue to be surprised.  Kelly told Mandi that her background allows her to do really good.  She said it’s hard to choose because they are very different.  She went with who she felt was “consistent and steady.”” Kelly chose Mandi.

BATTLE WINNER: Mandi Thomas (watch her inteview below).  Kelly said she can give her a song from any genre of music. Kelly said

MORE BATTLES: From TEAM KELLY, it was Tayler Green vs. Jules. They sang “Water Under the Bridge.”   Kelly said she went with who could navigate the show the best.  That was Tayler.  WINNER: Tayler Green.

Thunderstorm is from Hawaii, but moved to Nashville a year ago.  He was a four-chair-turn from singing “Black Bird” in his Blind Audition.   Cedrice grew up in a Filipino household.  She wants a successful music career for her family.  Cedrice said she performs Ella Mai’s music in San Diego.   John gave them “Stay” song by Rihanna, featuring Mikky Ekko .   He called the song one of the great ballads from the last decade. Ella said Cedrice has a “richness and powerfulness,”  There’s “clarity” in Thunderstorm’s song.  John called Thunderstorm’s tone beautiful.   Cedrice said she wants to be seen as being “approachable” and takes direction well.   Ella said she stayed true to herself and stick to what you believe-in and know what’s right.

Nick said it was one of the Battles he was looking forward to seeing and they did not disappoint. Nick complimented their chemistry by saying he almost felt as if he shouldn’t be watching them! He praised Cedrice for not stepping out of her comfort zone and she “sold it.” Nick told Thunderstorm that he sang his rear off.  “I hope I get the chance to work with you someday, some how,” stated Nick. He picked Thunderstorm.  Kelly said she couldn’t take her eyes off Cedrice because of her confidence and she’s captivating.  She said Thunderstorm can do way more songs.   Blake told Cedrice that there’s something magical about her and she’s super talented. While Thunderstorm lives up to his name. “It’s hard not to pick Thunderstorm because he’s thunderstorm.”

John said Cedrice carries herself like she should be on all stages.  He told Thunderstorm that he has one of the most special voices he’s every heard.  It took work for them to work-out their chemistry together.  John chose Thunderstorm as the winner.  John said it was a tough decision, and he has one of those voices that could win the show.

NEXT WEEK: The MEGA MENTOR joins the coaches and their Teams.
The Mega Mentor this season is James Taylor