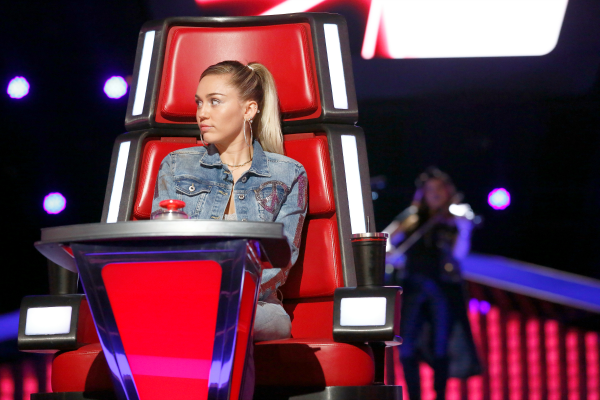 The coaches continue their competitive ways in week two of “The Voice” season 13 Blind Auditions. Jennifer Hudson was successful in throwing her shoe again at an artist on stage. Miley and Adam got into some really close battles while trying to win over talented artists for their teams.

There were a few curve balls during the auditions that had the coaches guessing as singers looked completley different from their sounds. Some young, yet powerful singers of the third night of auditions included Devon, Addison, and Moriah. Also, one of these speical artists already have coaches predicting that they’ll be in the finale.

Miley Cyrus won out Monday night by adding three more members to her team while Blake, Adam and Jennifer picked-up two new members each for their teams. 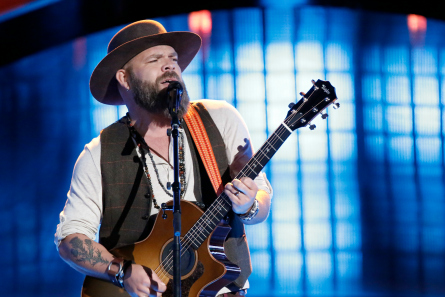 Adam Levine pointed out that the Allman Brothers isn’t pure Country. Miley said Jennifer won “The Voice UK” last season and has a lot of soul which would be best for him. Jennifer said she, NOT Blake can teach him about soul. Blake told Jennifer congrats on winning The Voice UK. “We’re in the United States now”. Blake said he loves the power in Adam’s voice and that he’s from Nashville. 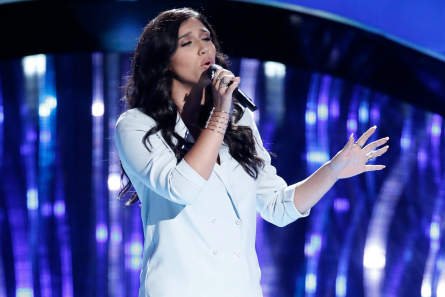 Hannah was inspired to try-out for “The Voice” by her brother who commited suicide. She sang “Starving”.

Adam said when that style music is done right, it’s so good.. Also, she’s not a typical Team Adam contestant. Jennifer said she needs Hannah “at J Hud productions”. Blake said she seems used to “this chaos” that she stepped into and thinks they’d have a blast. Jennifer told her to be careful of Blake who called her a backup singer and Adam who said he doesn’t have any females on his team. Then Adam told her to be on his team. But, Jennifer said Hannah needs to make her own decisions.

Hannah chose Adam. Adam was excited because she was his first girl. He said he hasn’t had a “tried and true pop singer in a while.” She said Adam knows that Pop side and thinks he’s a good fit for her.

SHILO GOLD (2-chair-turn) TEAM MILEY
Music in Shilo’s family goes back to the 1780s she said. Shilo went on a journey on booking 85 shows in seven countries. She said she would pick Jennifer for the way she captures an audience.

Jennifer and Miley turned at the very end of Shilo’s audition. Blake told Shilo that she made it into ‘Voice history with the closest to being at the end before someone hit their “buzzer”. Miley said Hannah has Jennifer’s range with her raspiness. She’s a perfect combo of both Jennifer and Miley’s voice.

Shilo chose Miley because her voice is close to Miley’s. Miley said she knows what to do with Shilo’s voice and is the perfect coach for her.

SAMANTHA RIOS
Samantha is 15-years-old. She grew-up listening to Spanish, Pop, and R&B. She sang “Something’s Got a Hold a Me” by Etta James.

Blake told Samantha “when you take the over-thinking out of it, it felt different those last few seconds.” Jennifer said she didn’t tap into the low notes enough. “You really want to SING them” she told her. Jennifer later said that she wished Samantha picked a different song.

NOAH MAC (2-chair-turn) TEAM BLAKE
Noah is 17 years old. He turned a shed in his family’s backyard into a music room. He’s influenced by soul, R&B and gospel. His dad got emotional when he said it’s like Noah “is made out of music.” Noah sang a song at his sister’s funeral who died of brain cancer when he was eight. His mom said Noah took them out of their saddest moment. He sang “Way Down We Go”.

Miley called him hot. Adam said he was a missed opportunity for Miley and himself. Jennifer said she felt that it came from his soul and he took her on a journey. “I HAD to turn around, and then…Blake did too”. Blake said Noah’s voice stayed round and full which is “so special”. Noah told them that he’s been performing since he was eight. “A man that can sing at his own sister’s funeral can handle this show,” said Blake 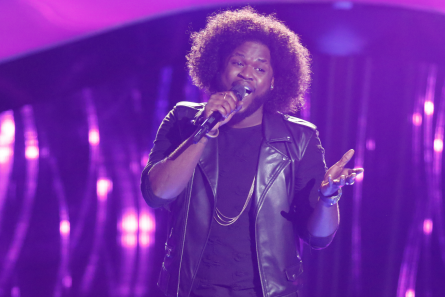 Davon said he’s “a fighter” growing-up in a drug ridden part of town in Baltimore and struggled. He’s a worship leader and does a lot of vocal arrangements. He was inspired by his mom to be a singer who also sings. He said he wants the coaches to hear his heart and sing his face off. Davon sang “Me & Mrs Jones”.

Jennifer threw her shoe at Davon before his audition was over. Blake told Davon that he’s going to be in the finale. Jennifer said he left the coaches speechless. She asked where he got his singing skills from. He answered his mom and Whitney Huston. Jennifer related to him by telling him she used to sing to Whitney and on stages like he is doing. Miley fought back by stating her God mother wrote “I Will Always Love You”. But, it didn’t distract Davon from Jennifer who then sang that song with him. Blake said the idea is to inspire the most amount of people and that comes from winning. Blake boosted that he’s had the most wins.

Davon chose Jennifer. Jennifer said Davon is extremely special and stole her heart. She said he could win the show.

KATHRINA FEIGH (2-chair-turn) TEAM JHUD
Her family moved to Los Angeles from the Philippines when she was nine-years-old. Her parents wanted her to be a pharmacist or a nurse. But, support her dream of being a singer.

Jennifer and Blake turned at the last note of Kathrina’s song. Miley said Jennifer has a similar tone as Kathrina’s. Jennifer told Kathrina that she “has THE VOICE. Kathrina told Jennifer that she saw her on Broadway performing in “The Color Purple.” Blake said there’s a broad spectrum of what she can do musically.

Kathrina picked Jennifer. Jennifer said her voice is “undeniable and pure” and represents “The Voice.”

Blake and Jennifer continued to battle it out over other singers. Anna Catherine Dehart picked Blake. Alexandra Joyce chose Jennifer.

ADDISON AGEN (2-chair-turn) TEAM MILEY
Addison is 16-years-old. Her dad owns a record store which introduced her to different sounds. She sings on the stage inside of his store all the time. Her mom is a music therapist. Her sound is alternative folk. Addison sang “Jolene”.

Blake said he was “stepping back” so that Miley can have her on her team. Adam told her that she’s one of his favorite singers. “You are so full of life, power and emotion,” Adam said. He also told her that she’s the most talented for her age since Danielle Bradbery. Miley said she can relate to her in a way that Adam can’t.

Addison chose Miley. She said she went with Miley because she’s a younger version of Miley. Miley said Addison and her are meant to be. 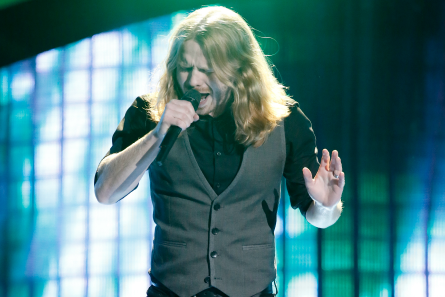 Adam Pearce auditioned on “The Voice” last season, but didn’t get a chair turn. He said he went to three voice coaches since then, and currently peforms about six times per week. He sang “Hot Blooded”. He said a chair turn would represent how hard work pays off.

Adam said Adam was wild and crazy, yet refined. Miley said she can do anything as a coach and doesn’t let her fear get in the way. Jennifer said she didn’t turn around because she can’t compete in this area and not with those two. Blake said Miley didn’t need two seasons to turn around (taking a stab at Adam Levine).

Adam chose Adam Levine for his coach. Adam said Adam is “bad-ass” and “tore the roof off this place.” Miley said “Adam and Adam is a match made in Adam.”

MYLES FROST
Myles’ mom said he’s always danced. His grandmother got him into piano. He now plays five instruments. Piano is his favorite. He said singing has gotten him through tough times and was raised by a single mother. Myles just graduated from high school. He sang “My Cherie Amour”.

Adam said they can hear the beauty and the nerves in his voice. He told him to work on his craft and come back. Jennifer told him he has to nail the meolody. But Stevie Wonder is hard to sing. She also told him to come back again. Jennifer said this time around, she’s looking for something different. 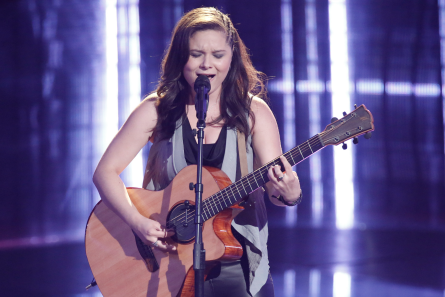 Moriah is 16-years-old and loves Rock-n-Roll. She’s been singing since she was nine-years-old. She started taking lessons at a young age and opened for “Stryper”, a Christian metal band. She said Adam is her first choice. She sang “Crazy on You.”

The coaches were all shocked that Moriah is 16-years-old. Jennifer said Moriah proves that it doesn’t matter how old you are. Blake said someone like her that has so much talent, it’s not fair to everyone esle. But, it’s good to have someone in her corner that believes in her like he does. Miley said she would be able to give her “big sister advice.” She said they can relate to each other a lot. Adam called her an “old soul.” He pointed-out that she has a good knowledge of Rock-and-Roll music and that’s his world. Miley told Moriah that she sees her as a Beth Hart and will let her pick her own songs and arrange them how she wants.

Moriah chose Miley. Moriah said she felt more of a connection to Miley since she was a child star.