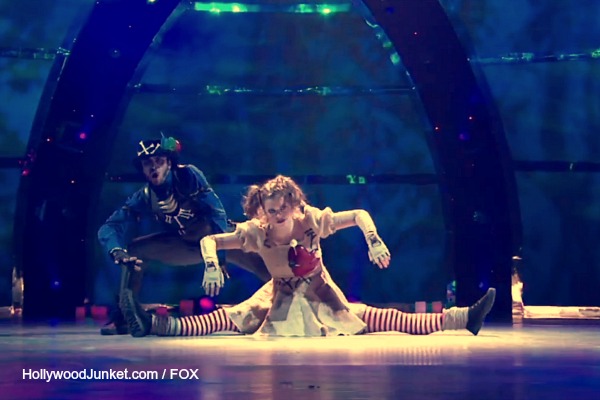 The Top 14 dancers left on “So You Think You Can Dance” this season opened the show in a group performance dancing to “Last Moment” dedicated to the fact that there will be only ten dancers left after four have been eliminated in this episode.

Soon after, host Cat Deeley took to the stage to announce who was in the Bottom Six, and remind viewers that judges Nigel Lythgoe and Mary Murphy will save one guy and one girl at the end of the show. This week’s guest judge was actress Christina Applegate. The Bottom Six were: Serge, Carly, Casey, Jessica, Emily, Teddy. These dancers had to dance for their lives in this episode to stay in the SYTYCD competition, making it to next week’s Top 10. 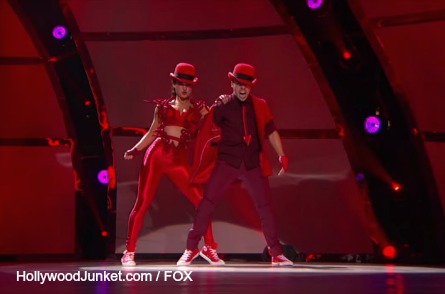 They danced a jazz number choreographed by Ray Leeper. Nigel told Emilio to lower his shoulders. He also told him that he may be on the road to, but at least he’s not on the road to home. Mary thought that Emilio “nailed it!”. She told Bridget that she’s beautiful. WATCH their performance and interview here! 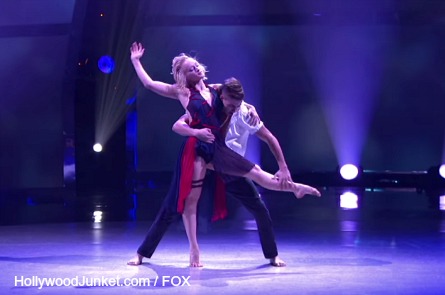 Their routine was a contemporary dance choreographed by Mandy Moore. Christina Applegate stood up for them. Mary yelled “Whoa! It’s hot, sexy up there!” She complimented Rudy on his over-head lift. Nigel said “Mandy Moore got every ounce of emotion.” WATCH their performance and interview here!

SERGE danced his solo to fight for his life. 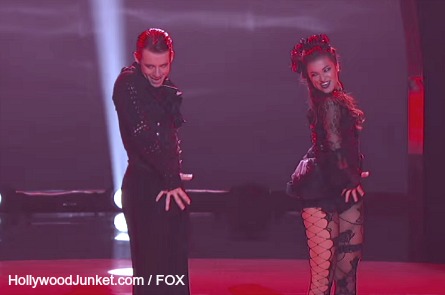 They had to learn the Paso Doble from Jean-Marc Genereux. Choreographer Genereux put an interesting vampire twist on the routine and had them dance to Rob Zombie’s “Dragula” song. After they were done with their performance, all three of the judges showed-off fake vampire teeth. Mary said “It was love at first bite.” She also said that Zack always gives “full-tilt,” and that Jacque was “hitting as well.” Nigel said he was “glad that the concept didn’t over-shadow the routine.” Christina to Jacque she was “splendid” and Zack was consistently great. WATCH their performance and interview here!

CARLY danced her solo to fight for her life.

A package with Cyrus and Twitch were played as they talked about their new movie “Step Up All In” followed by an extended sneak-peek teaser. This time, the movie takes place in Las Vegas and follows dancers trying to make-it as pro dancers in Las Vegas. 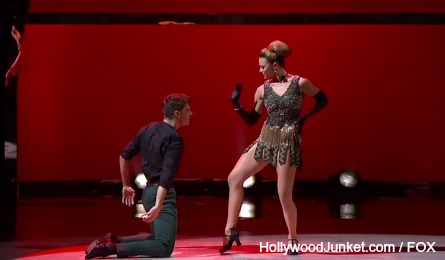 They performed a Broadway piece choreographed by Warren Carlyle. Nigel observed, “my thighs are hurting just watching it. It’s much tougher than it looks!” He said he’s done that dance before and it’s from the styles of Gene Kelly, and Michael Kidd. He was disappointed by the end of their performance because it wasn’t as strong as it could have been. Christina said it transported her back to Bob Fosse. She said Teddy blew her away, and Emily made her really enjoy it. Mary said “I love this style. It went in and out. It went downhill a bit towards the end. Teddy, your heart is in the right place.” WATCH their performance and interview here!

CASEY danced his solo to fight for his life.

EMILY danced her solo to fight for her life. 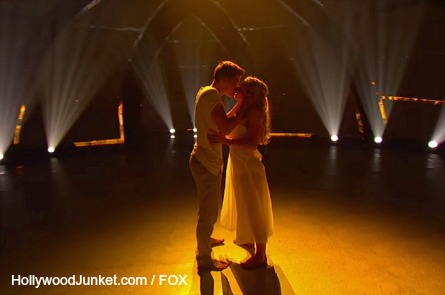 They danced a contemporary number choreographed by Travis Wall. All of the judges stood up. Jessica was crying. Christina said “I still think that you (Jessica) can win. Your intent was so clear. I have electric shocks going through my body.” Christina then said she was coming for everyone in the audience and at home if Jessica and Casey were ever in the bottom again. Mary agreed with that too, and said she could watch their routine “over and over,” and said even though Casey and Jessica is a new partnership, it seemed to take them only two seconds to get it to work. Nigel said “there was something very magical tonight. It was very beautiful to watch.” WATCH their performance and interview here!

TEDDY danced his solo to fight for his life. 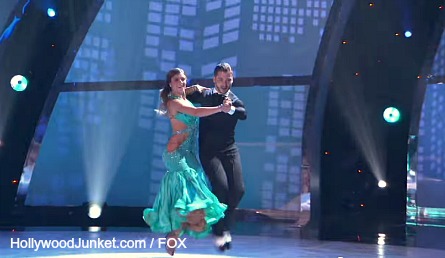 They danced a Quickstep choreographed by Jean-Marc Genereux. Mary said it was the first Quickstep of the season, and the hard part is “these two cook very well. Serge as a Latin dancer, this is far from home. Carly, you were really hitting it up there.” Christina advised them to watch Cyd Charisse movies and said they were both “fabulous”. WATCH their performance and interview here!

JESSICA danced her solo to fight for her life. 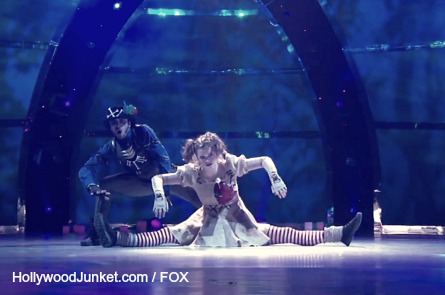 Their dance was a creative Hip-Hop routine choreographed by Christopher “Pharside” Jennings and Krystal “Phoenix” Meraz. It required Valerie to do thigh lifts while in a splits position on the floor! Nigel asked her if she really did a leg lift in a split. He said, “Valerie, you are great in character. He told Ricky he is the best technical dancer that they’ve ever had on SYTYCD. Nigel called them “the power couple.” Christina said she’d been waiting to meet them and loves them. Mary said it was “the best of the night,” and called it a “crime scene.” They murdered it! WATCH their performance and interview here!

MANDY MOORE – choreographed the Top 7 women in their group number. Christina said they were all at an 11. “See 11 from Spinal Tap” and said they are too young to understand her reference. Mary said “I saw a beautiful story. Girls picking them up. That’s what we have to do in the world” as she started to get teary and emotional. Nigel said “this would have never occurred had this show not been here. He said past guest judge this season Misty Copeland was wrong about the boys being better this season.

TRAVIS WALL – choreographed the Top 7 men in their group number. Mary said it was fabulous and she was so glad to be sitting there watching it. Nigel said real men don’t lift weights, they lift women! He called the performance “magnificent” and called it another gift. Nigel also said “maybe Misty was a little right (about the boys being better this season).” Christina said “I come hear because I get to have that!” She then joked at the men who all had their chests uncovered, “Oh, your boobs are showing. You might want to pull up the tube top!”

THE JUDGES SAVES OF THE NIGHT:

The judges said their were in a unanimous agreement to save Jessica, and Casey. Nigel said “two events have made it a little easier tonight. You know you have to overcome bumps in the road in your journey. You can cope because you know you will bring something beautiful to the world of dance and we are all in agreement.”

The Top 10 are paired with the following All-Stars for next week’s performances: