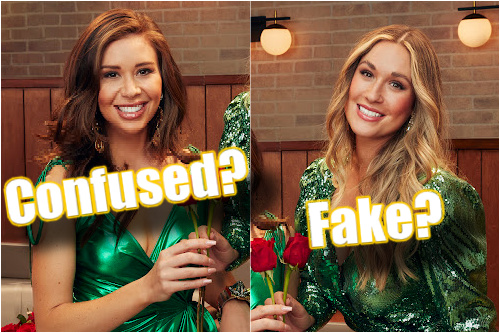 This week on “The Bachelorette” we got two full two-hour episodes of overnight dates.  ‘Bachelorettes Gabby Windey and Rachel Recchia chatted to each other about what their expectations were going into this very important week.   They each had three men remaining.  Gabby’s men were Jason, Erich, and Johnny.  Two of whom revealed last week in the hometowns episode that they were NOT ready for an engagement.  Rachel’s men were Zach, Aven, and Tino.  Her three men have already shown that they are all-in with Rachel with no engagement hesitations. 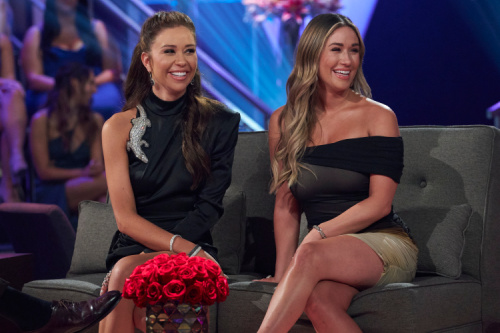 As Rachel and Gabby conversed with each other, they couldn’t help but remember that it was during this same week in their ‘Bachelor season with Clayton Echard as the lead that everything “went off the rails.”  Unfortunately, there was a bit of going off the rails later in the episode for Gabby’s overnight dates as well.

Gabby’s first date was with Erich.  When they went diving off the side of some really high cliffs, Gabby learned that she can trust Erich.  Erich wasn’t bothered by Gabby’s upbringing of not feeling emotionally loved by her mother and being away from her dad who was in the military for long periods at a time.  Erich complimented her that for everything that she has been through, she turned out amazing. The most important thing that came out of their date was when Erich told Gabby that he’s past the point of “falling” in love with her, he IS “in love with her,” and told her he doesn’t want to leave there without her.  Gabby told Erich that she really is falling in love with him.

The next morning after their Fantasy Suite, Erich expressed that he was bothered knowing she would be spending time in Fantasy Suites with Johnny and Jason.  What viewers didn’t find out until Tuesday’s episode is that this is something Gabby and Erich talked about during their time off-camera and he chose to go out of his way to remind her of this again in Tuesday’s episode.

So…Monday’s episode then turned viewers’ attention away from Gabby (for good reason) until the end of the episode and onto Rachel’s overnight dates.  First-up was Aven’s date with Rachel.  Everything seemed to be textbook perfect between the two.  Aven had told Rachel that he’s falling in love with her during last week’s hometown date.  Then, this week, Rachel told Aven that she is also falling in love with him.  Rachel basically changed her mindset from not wanting to tell anyone until the end, to telling Aven, then later Tino those words as well.

One unexpected and random event that occurred in Monday’s episode was when host Jesse Palmer paid a visit to Tino who wasn’t doing too well sitting around waiting for his overnight date with Rachel.  Tino said “the waiting game is gut-wrenching at times.”   He described it as “nails on a chalkboard.”  The fact that Rachel felt very unwelcome and unsupported by Tino’s family after his hometown date was a big reason for concern.  This was edited with excerpts from Aven and Rachel’s date while they talked about how well his family received their relationship.

Then it was time for Tino’s overnight date with Rachel.  She addressed her feelings of not being liked by his family.  Tino’s answer was that it’s the show’s process that his father doesn’t like, not her.  Tino was also sure that his dad would eventually come around and it wasn’t a deal-breaker that his family doesn’t approve of them together.  He assured Rachel that he plans to propose if he was the last one at the end.  He also told Rachel that he doesn’t want to go home without her. 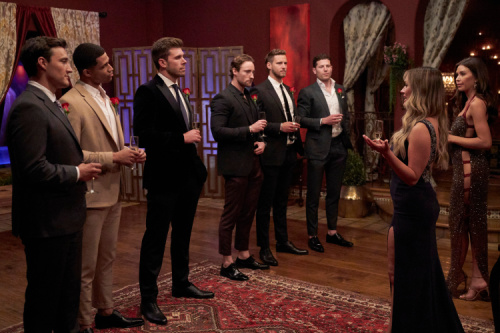 BACK TO GABBY- It all became so clear when at the start of Gabby and Johnny’s date, Johnny described Gabby in his confessional interview as – the “dopest” person he’s ever “hung with.”  That spells-out friend zone!  Thus, it was the beginning of the end for Gabby and Johnny.  Because midway through the date when Johnny finally told Gabby that he wasn’t at the point with her yet where he could see himself proposing to her at the end.  Though Gabby seemed to be set on Erich from earlier in the episode she was upset over this rejection from Johnny.  Gabby said it was hard for her to hear because there was a part of her that hoped it would be them two at the end.  But, they want different things.

At the end of Monday’s episode this is where Erich decided to remind Gabby about their private conversation that they had during the Fantasy Suite date with the absence of cameras.  He did this by leaving her an anonymous note inviting her to meet him.  Gabby got upset over this and this ending to the episode made it seem that Gabby and Erich were also going to breakup.  “This feels like this is the end for me,” said Gabby.

It seemed to start with Clayton’s season where contestants and the lead started to walk out on each other after something upsetting was said.  This happened a few times in both Monday and Tuesday’s episodes. Tuesday’s episode continued with Erich and Gabby where she walked-out on their conversation after getting upset upon him pressing her about his feelings that she is cheating on him.  Gabby eventually came back and hugged Erich.

But, what’s really interesting is how in Monday’s episode, she was pretty sure her guy was Erich.  However, in this episode Gabby tells Jesse Palmer that she was feeling like it wasn’t meant to be with Erich, and was looking forward to her overnight date with Jason.  So, now she’s not sure about Erich, but hopeful of Jason.  What she didn’t know at this point was that Jason is not only NOT in love with her, he most definitely isn’t ready to propose to her which he revealed these thoughts to Jesse Palmer.

During Gabby and Jason’s date he told her how “crazy and weird” the whole experience has been for him as well as challenging.  Jason was completely honest with Gabby by telling her he’s “not there yet” for the expectation of an engagement, and stated  “It’s something in my heart that doesn’t feel right.”  Gabby took him to the Fantasy Suite anyway.  The next morning, Jason and Gabby did not wake up together.  They were very separate.  This is where viewers found out that a riff between Gabby and Jason formed during the Fantasy Suite and they got into a heated argument. Gabby ended-up leaving the suite.  So, the next morning, she went back to visit Jason.

This is when Jason and Gabby broke-up.  What was really interesting was that Gabby accused Jason of leading her on.  But, Jason said he needed the Fantasy Suite time (this is the only time when the contestants are 100% free of cameras) to get clarity.  He had a very valid point.  Gabby didn’t see it that way.  The two parted ways.

Rachel had one last overnight date left and that was with Zach… and it was a doozy (not in the way you think)!!  We learned a lot about Rachel on this overnight date.  Since there were no cameras, viewers only got Zach’s side of the story before the episode ended.   Zach was left feeling very disturbed by how once the cameras were off, Rachel seemed like a completely different person.  He described her as acting as if they were strangers.  The next day was the Rose Ceremony.  Rachel’s actions caused Zach to not want to accept a rose from her.  In his confessional interview, Zach stated that he felt “sick to his stomach” because he thought that his connection with Rachel was really strong before the Fantasy Suite.

At the start of the Rose Ceremony, Jesse Palmer told Rachel that Gabby wouldn’t be partaking in the ceremony.  In the meantime, Gabby was inside Erich’s suite telling him he’s the last one there, and also, he’s the one she’s come to the realization that he’s the one for her.  So, no need for a Rose Ceremony.  Gabby said in her confessional interview that Erich is definitely the love of her life and it’s “meant to be.”

Here’s an observation, If Gabby thought her person was Jason, then realized he wasn’t only after he broke up with her.  Then Erich is also not her person because if he was, she would have never thought it could remotely be Jason!

Before Rachel could hand out her first rose, Zach called her to talk in private.  Of course the other two men (Tino and Aven) were bothered by this.  They have no idea that most likely Zach is going to self-eliminate in next week’s episode.  This is where Tuesday’s episode ended.

TO BE CONTINUED!
Jesse Palmer promised that next week will be the “most dramatic” Bachelorette finale in history.  He said there would be “crazy controversy” that’s about to ensue.  Next week will be Gabby’s and Rachel’s hometown dates where Rachel will introduce Aven and Tino to her family.  Gabby will introduce Erich to her family.  In the sneak preview, one family member stated that one of the guys isn’t ready to propose.   The teaser also shows Gabby getting emotional because Erich expressed that he’s not ready for an engagement and wants to date first.  There’s another clip of Rachel and Aven arguing over something.   There’s also trouble between Rachel and Tino where Tino does something that’s misleading.