The seventh annual “Game Show Congress”, founded by Paul Bailey, was held this past Friday, November 13th-16th. According to Bailey, the annual conference is “almost 100% volunteer run”.

The weekend of game show festivities started with a social mixer on Friday at 8pm. Saturday’s events included “Game Tournament”, and seminars that included: “Game Demonstrations and Pitch Sessions”, and “How to Ace the Audition”, (with casting director Beverly Pomerantz).

Steve Beverly, Professor of Broadcasting at Union University at Jackson, TN made an informative presentation on the “State of the Games” that focused on the ever-changing landscape and playing field of the modern game shows. Beverly was followed by “The Wonderul World of Game Shows” presented by legendary host, Tom Kennedy. A lot of game show information was given between the two lectures. The whole game show history was explored, putting its beginnings in cave-man days. Today’s economy and the recession has had its effects on game shows. The days where big prize money such as $1 million or more was obtainable by contestants are more than likely, long gone. Game shows in the near future will be giving away smaller amounts of money (in the $10,000-$15,000 or less range). Networks are keeping game shows with ratings as low as 1.0 where before, they would not. Even the most basic game show requires a lot to produce.

In 1975, there were 26 regularly scheduled game shows airing on television. According to “Game Show Congress”, the first game show was in 1924, called “The Pop Question”.

The game show hosts and producers from classic game shows have reached a consensus – that the modern game shows are making a mistake by hiring comedians and actors as hosts. They don’t think Wayne Brady as host to the new version of “Let’s Make a Deal” is a good thing. In fact, one of the guest speakers half-jokingly mentioned that when Monty Hall saw what Brady was doing with “Let’s Make a Deal”, “his hair turned black”.

Show producer of “The $10,000 Pyramid”, and the Daytime Emmys, David Michaels, told his story about how he got his start in game show production, and his first encounter with “Jack Pot” host, Geoff Edwards. Michaels stated that he “faked” his way through the interviews for the Production Assistant (PA) job on “Jack Pot”. But, when he was assigned to be the PA to show host, Edwards, he felt that he had to come clean. Michaels gave Edwards the choice to either find a replacement that was more experienced in production, or teach him how to help him and be a great PA. Edwards chose the latter. Michaels went on to produce for Bob Stewart, producer of “Jack Pot”, “Password”, “To Tell the Truth” among others. It was announced that Stewart will be inducted into the Academy Award Hall of Fame. Stewart stated that he is currently presenting a new game show with announcer Ross Mitchell (“Coast-to-Coast AM” raido). 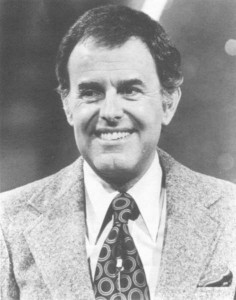 Upon receiving his award (“Ralph Edwards Award for Career Community Service”), Geoff Edwards stated that “No, Ralph Edwards is not my father. But, if he was, I would have received this award five years ago!” Edwards also stated that the one thing he misses the most is his hair.

Tom Kennedy, host of “Name That Tune”, and “Super Password”, presented the “Bill Cullen Award for Career Achievement” to Allen Ludden. Betty White was in attendance to accept the award on behalf of her deceased husband, Ludden. Kennedy stated that his shows “always followed Allen Ludden” in air times. Kennedy hosted “Split Second”, and took over “Super Password Plus” after Ludden passed away in the summer of 1981.

The show that Ludden became best known for, “Password”, almost didn’t happen. According to Bob Stewart, in 1961, before tape, there was the issue of how to confirm the words that the contestants would give. Not until someone resolved the issue by using an on-set judge was Stewart able to convince Mark Goodsen to present it as a pitch to the network. They found an English Professor to serve as “judge” on the show. Ultimately, having celebrities on “Password”, paid off as a winning formula for the show. Audiences tended to root for “Carol Burnett’s side”, or whichever celebrity they chose. 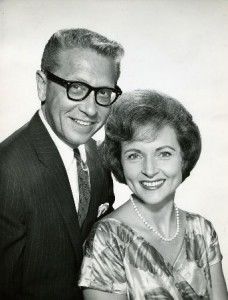 Named, “the best contestant ever”, Betty White, Stewart also told the story of when White and Ludden first met on “Password”. He said, White was flown-in as a celebrity guest from Los Angeles to New York where the show was shot. After two minutes of meeting White, Ludden told Stewart, “I’m going to marry that woman”. So he did. After one year of much persuasion, White married Ludden. Stewart said, if Ludden had not, he would have married White. Audience laughter followed. 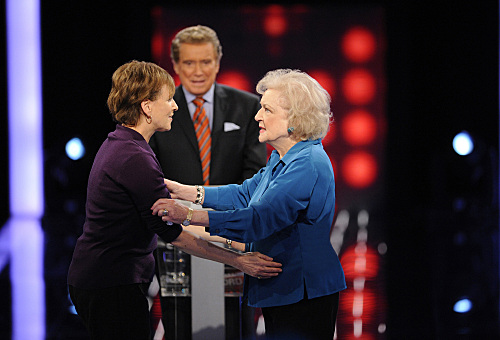 A special video was made and shown at the conference of Regis Philbin in recognition of Ludden’s career and apreciation for his dedcaition to the business. That video will be on the conferences’ website later this week: http://www.gameshowcongress.net/

The third award given-out at Sunday’s “Game Show Conference”, was a surprise award to game show announcer, Johnny Gilbert. Gilbert has done over 51 game shows! He is best known for “Jeopardy”, and “Super Market Sweep.” Gilbert stated that he was told that he was there to present an award to announcer Don Pardo (“Wheel of Fortune”, and “Concentration”).

In his acceptance speech, Gilbert stated, “one of the crowning achievements in my life as an announcer is when I said ‘SUPERMARKET SWEEP!'”