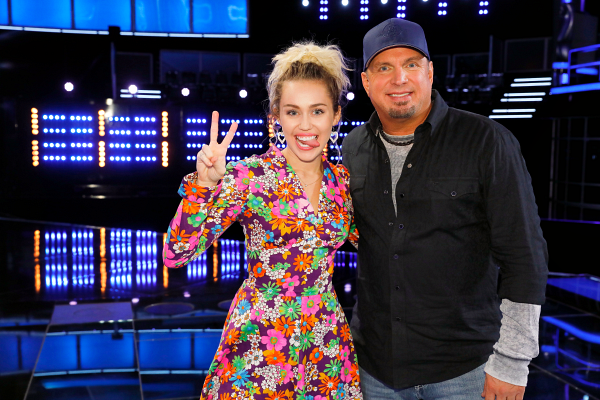 “Having a blast with this moment.” – Blake Shelton

Garth Brooks has 138 million albums sold and his ultimate 10 disc collection is newly released. “The Voice is the true test of sincerity,” Garth said. He also said what he loves about “The Voice” is that everyone can achieve their dream.

Alicia Keys reminded viewers that there are NO more steals, no more saves and “the stakes are really high,” she said. 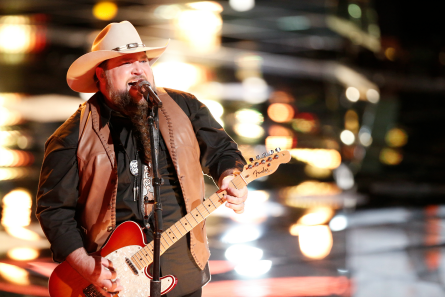 Sundance sang “My Church”. Blake said Sundance is taking female song that’s popular right now and making it his own. Garth said the more he strips it away, the more Sundance can make it his own and create magic. Sundance said he wants to take everyone to church.

Miley said she think Sundance was made to be on a big stage. Blake said “vocally I’d put you up against anybody in the world. You’re what we all strive for.” Blake also said Sundance is “having a blast with this moment.” 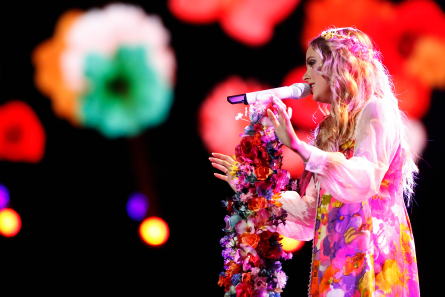 Darby, who just turned 18-years old and a huge fan of Garth Brooks, sang “Ruby Tuesday.” Darby said she’s going to sing for her life and it will be her “most vulnerable performance yet.”

Blake said he can’t express enough how important that performance was in giving her “full voice” and her voice is “so powerful.” He also said there’s a lot of passion in her voice. Coach Miley said Darby represents the song well.

Garth was impressed by Christian’s high falsetto and said he said the part of two people. Garth said he has a voice “that’ just effortless.” Christian sang “The Scientist.”

Adam reacted, “everyone knows you’re feeling what you’re doing.” He said he wished that Christian was on his team. Coach Alicia said she’s so proud of him and he has the ability of owning the song and “being inside of it.” Alicia told him he “nailed it.”

Alicia saved Sa’Rayah last week after the Knockout Round. Sa’Rayah sang Jon Bon Jovi’s “Living on a Prayer” she said which is different for her but it’s like her life right now. Garth said being a female, she can take the song to a new level.

Previous coach Miley said she loves to see Sa’Rayah do more rock songs and it’s what she had Sa’Rayah do in the beginning. Blake said his favorite thing about her performance is sometimes she his notes where it looks like she’s even surprised. Coach Alicia said she continues to be wowed by her, and very proud of her. 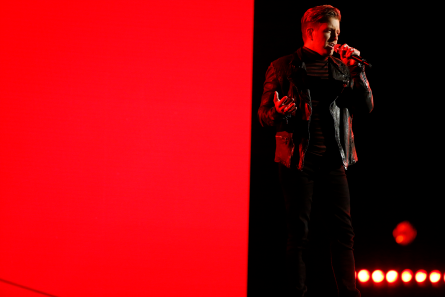 Garth knew about Billy being a child star. Billy chose to sing “The Show Must Go On”. He said after hearing Billy, “the future now belongs to him.” Billy explained “this song captures the history I’ve had, the struggles.” Billy also said “The Show Must Go On” was his defense mechanism.

Blake said “it’s amazing” and way before he had any success that he remembered Billy open one of the awards shows. He said Billy has hung onto his success because he’s a million times better as an adult. Coach Adam was almost speechless. “I just think when you hear something like this happen on stage,” what could possible epitomizes the show more. Adam said Billy is truly special and it’s only the beginning for him. 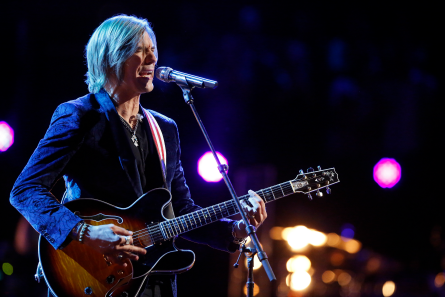 Austin said it was a dream come true working with Garth Brooks. Austin chose to sing “A Do Right Man.” He said “I want to be a do right man for my wife and a do right man for my kids.” Garth said Austin “has no ceiling.” Garth also said about the song, “you pick Aretha Franklin, and do it justice.”

Miley said it’s her favorite performance of Austins.’ She said she didn’t know he had those notes in him and maybe it was “Garth magic!” Blake said there’s a movement happening in Country music right now. “There’s a new generation of outlaw of Country music that’s happening.” He continued with, there’s no one in that group that can sing like Austin, and called it “unbelievable!” 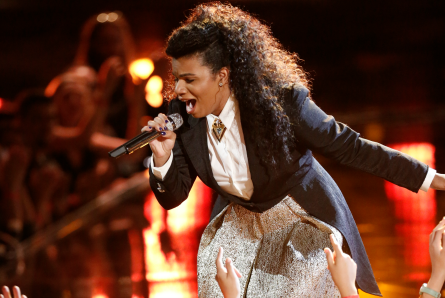 We’ said Alicia is helping her achieve her dream. Garth was stunned at We’s voice and couldn’t believe it was the same person. We’ chose to sing “Take Me To Church”. Alicia said with this song We’ will be able to show people why she’s such a special artist.

Miley said she gets emotional every time she sees We’ perform with people in the audience grabbing her and it’s amazing to have all those people “loving on her.” Coach Alicia called We’ “the real deal and “unforgettable.” She also said she’s proud of We’.

Aaron compared Garth to Elvis and “The Beatles”. Aaron said he chose a song that showcases his “all around rock style.” He said each week on “The Voice” it’s the biggest performance of your life. Aaron sang “Hollywood Forever Cemetery Sings”

Adam said Aaron’s voice is so special that he has a responsibility to be a singer, otherwise it would be a dis-service to the world. It’s so special and distinctive. Blake said if Godzilla could sing, that’s what he’d sound like. “The fire comes out!” Blake also pointed-put that Aaron is breaking new ground because they’ve never had anyone on the show like him before. Coach Miley said they were going back and forth with the song and how to do it. He said she could see Aaron being an artist like the original artist and called him special. 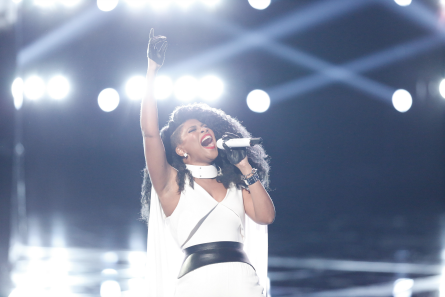 Blake said Steven Tyler’s “I Don’t Want to Miss a Thing” song showcases how powerful Courtney is. Overall when Steven Tyler sings this, there’ so much angst, said Blake. Courtney said it reminds her of her son, and having him so young, she didn’t want to miss a thing. Garth said if you want the audience to get closer, you back off and everyone leans forward

Alicia called it a beautiful song and powerful and Courtney gave an unforgettable feeling to the audience. Coach Blake said they all feel “just a little bit more invested in the artist that they save moving forward. He said he made the right choice and she’s having the moment that she earned.

Josh got to meet his idol – Garth Brooks. Josh announced his recent marriage just one month ago during his break from “The Voice”. Josh sang Jason Aldean song “Why”. Adam thinks Josh “can easily make it to the end.”

Josh was left winded and emotional after his performance. Blake, who had Josh on his team before Adam stole him, said “getting to this, you never know if you made the right or wrong choice as a coach. You do deserve to still be here.” Coach Adam said “no one works harder than Josh, and stated that he was really lucky to have Garth helping since this isn’t his wheelhouse. He told Josh he’s very proud to have him on his team. 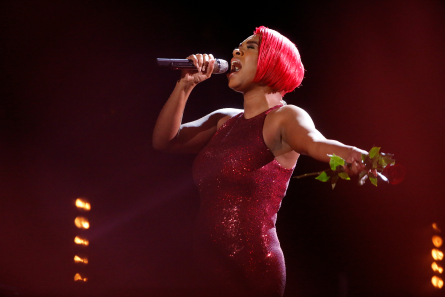 Garth said about Ali, “you can tell she has a wonderful way of treating lyrics even if she’s never heard it.” Ali said performing this song – it’s her biggest challenge so far. Ali sang “Did I Ever Love You.”

Alicia said “honestly, that was a REAL moment’ she said the way she owned the stage and the way she let everyone in. Alicia said the song choice couldn’t be better timing. Coach Miley said she’s proud of Ali “every single time.” She called them
“a cosmic coincidence” and thanked Ali for trusting to her. Miley reminded Ali that they’re in it to win this! 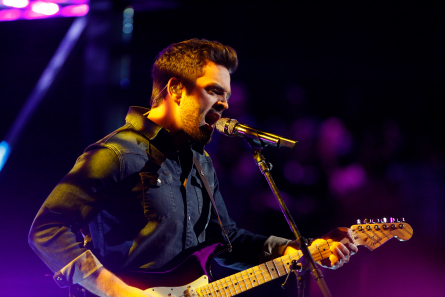 Adam told Brendan “you need this moment because you’ve done a lot of introverted things.” Adam said this is the biggest performance and will be the first time he’s really will try to capture an audience. Garth see Brendan’s potential in being “a star on the radio.”

Blake stated, “I feel that battle brewing between you and Aaron.” He said because “now there’s two of you on the show.” Adam exclaimed with excitement about Brendan, “this guy was not this guy before and he just became him.” Adam finished with, “this guy deserves to be voted through!” 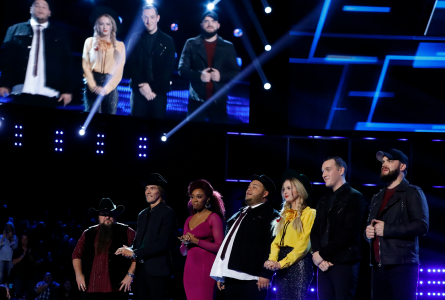 After host Carson Daly introduced the coaches and announced that Alicia Keys will be performaning a new song on “The Voice” stage, the Top 12 artists were then brought out onto the stage. Daly asked We’ about selecting Team Alicia after her 4-chair-turn in her Blind Audition. We’ answered, “I felt like she had something in my heart that I vibed with and said they’ve grown a greater connection since then. 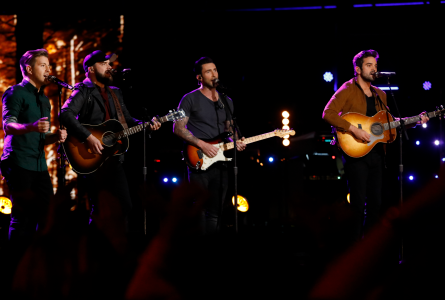 When Josh Gallagher was asked what he has gained by being on Team Adam, he answered that Adam has opened his eyes to a lot of different styles that he didn’t know he could “hone in one” and thanked him. Then Daly announced Courtney Harrell from Team Blake as the next artist saved, followed by Billy Gilman from Team Adam. 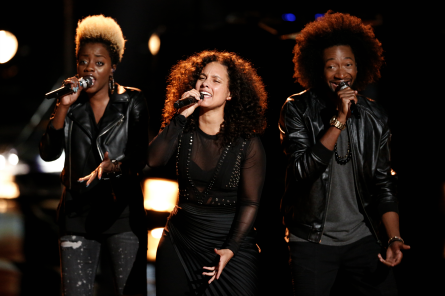 Coach Alicia Keys hit the stage to change her tune to “Holy War” after stating it’s the only song she can sing given the current events. She was originally going to sing her new song called “Blended Family.” She posted a poll earlier on Twitter asking fans which song they’d prefer to hear on the live show tonight.

Sundance Head said coach Blake is a wonderful guy and hoped he had the opportunity to touch everyone there. The next save was Darby Walker from Team Miley. Then, from Team Blake, Austin Allsup was saved.

The remaining two artists Aaron Gibson and Sa’Rayah were left to depend on the Twitter Instant Save vote to see who’d be moving-on to next week’s last show. The each gave their best performance in an effort to sway the votes for themselves. Sa’Rayah sang “Rock Steady”. Aaron sang Ed Sheeran’s “Lego House” for his Save Song. 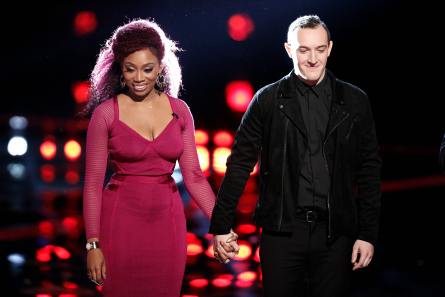 Alicia Keys told Sa’Rayah after her performance of “Rock Steady” there’s no denying the power and beauty of your voice.” She added, “if you have a heart in your chest, you hear and feel Sa’Rayah.” Miley told Aaron that “no matter how it turns out tonight” she can’t wait to see what they do together in the future. She then urged all of her fans to vote for Aaron.

Sa’Rayah’s parting words to Alicia was “thank you for believing in me and thank you for your love.” Aaron spoke to his coach Miley that he feels the love every time she’s in the room and thanked her for teaching him to be himself. Alicia called Sa’ Rayah “phenomenal.” Miley told Aaron thank you for performing from an artist part and not a competitor.

The Instant Save Vote went to Aaron Gibson.