Host of “The Tonight Show” Jimmy Fallon made his return in hosting his popular spin-off show “That’s My Jam” for a second season.  But, before filming began on that show, the same production team filmed a UK version on the same exact set at Universal Studios with a different host. The host of “That’s My Jam UK” is comedian Mo Gilligan who also hosted “The Lateish Show.”

The U.S. and UK versions not only shared the same studio, but the same band as well.  Both shows had band leader Adam Blackstone who’s responsible for those catchy sounds on the “That’s My Jam” and recreating familiar songs for the contestants’ Karaoke style performances.

In episode one, the star contestants were Michelle Visage from “Drag Race” playing with singer and “Britain’s Got Talent” judge Alesha Dixon.  They were playing against “Glee” actors Kevin McHale and Jenna Ushkowitz. 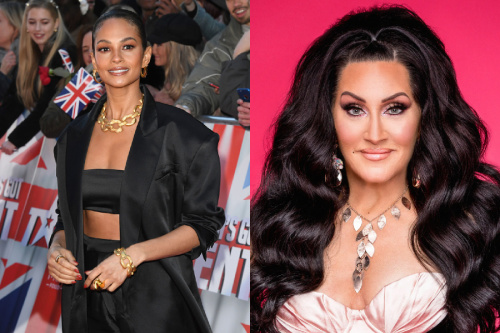 The players go for six games and play for a lot less points than the American version. Like, A LOT LESS points.  And you know that last round about “slaying” it?  Well, that was Alesha and Michelle on “That’s My Jam” because they slayed their game!  Their “Glee” opponents were so far behind that just before one of the rounds, host Mo Gilligan offered the former “Glee” stars a bonus point for singing a song about “putting it in the bins.” Once Kevin finished his song, that one bonus point turned into ten!  There was a brief interruption by the stage manager.  At first, we thought it was going to be called a foul game.  But, it had to do with a camera movement.

One round offered a huge bump from earning the usual 1 – 10 points to a whopping 50 points!  However, this didn’t even get the losing side caught up because they only earned one round of that game.  The dark cloud followed them all the way to the final round called “Slay it, or Spray it” at the Doom Box.

In a tight game it would have been tough to keep up with who was in the lead due to the fact that Team points are not displayed anywhere for the studio audience view.  However, the host does read the points off of a large ticker monitor that displays on the back wall where the audience is seated.  The host doesn’t give a verbal update on how many points have been earned by each team at the start or end of each round.  However, this particular game was easy to follow because it was evident who was winning and that required almost no math skills.  Apparently, points are displayed on the TV episodes once they air.

The games that were played in this episode were: Wheel of Impossible Karaoke, Take On Moe, Undercover Covers, More Than a Feeling, Launch the Mic, and the final round Slay it or Spray it.

The UK version’s “Wheel of Impossible Karaoke” was worth ten points each round.   Celebrity contestants pull a level similar to a Vegas casino slot machine.  When the spin lands is a combination of either a song in a different genre or a song sung by a character.  For example Jenna got “Yellow” song which she had to sing in a disco genre.  Michelle from “Drag Race” got “Magic Mic” where she had to run to multiple microphones when they lit up.  As she sang into them, each microphone had a different voice disguise.

Alesha knocked it out of the park when she had to sing “Shut Up” by Stormzy in a Disney Princess style.  She killed it and wailed at the end when she held a high note.  Kevin from “Glee” had to sing an impression of “Rocket Man” by Elton John in a Kermit the Frog voice.

In the game “Take on Moe” which was worth ten points, Moe sang three different songs with a twist on each one.  Whichever contestant could guess the song, had to run up to the mic when it lit up and yell out their answer.  For example, Moe sang “Jolene” in a “trashy” way, or Wu-Tang style.  Moe joked that this game was going to be so good, it was going to inspire a spin-off!

Moe sang three different songs with a twist on each one.  Whichever contestant could guess the song, had to run up to the microphone when it lit up and yell out their answer.  Moe sang “Jolene” by Dolly Parton in a “trashy” way, Wu-Tang style.

“Undercover Covers” was worth one point.  The players chose from silhouettes on a board of different guest musicians with a variety of instruments.  One was a violin, another one was a band, and one was a beat box artist who was holding a boombox.

The players had to pick a box to decide which musicians came out and played a cover while using their instrument.  Some examples included  “Chain” by Fleetwood Mac which was played by an accordion player.  He is a world champion record holder.   A beat-boxer rapper came out and did several covers as well.  A mariachi band came out and played three covers.  The beat boxer gave some lessons to Moe on how to beatbox.  He said it all starts with “boots and cats!”   The stage manager revealed that some of the silhouettes were empty without anyone behind them. So, contestants were limited to their choices.

In the “More Than a Feeling” round, the players had to do three rounds of putting their hands inside boxes to figure out what’s inside and connecting it to an artist or band.  There were three rounds of this, and a Final round.  Some of the answers that they had to guess included Korn, The Beatles,  Pearl Jam.  Alesha guessed “The Jam” and they accepted that answer.  The final round of this game had both Teams play for the exact same object at the same time.  Each round of this game was worth ten points.

The next round the celebrities played was “Launch the Mic,” worth one point each correct answer. The players were positioned in front of a microphone on a stand that launches into the air to them when they step on a pedal when they want to give their answers. They guessed the correct names of songs that were played in reverse.  One song played in reverse was “Watermelon Sugar High.”

The final round of each show is called “Slay it or Spray it” worth 50 points for each correct answer. If one team gives incorrect lyrics, the points go to the other team.  One player from each team got a Karaoke song chosen at random.  They started singing along like regular karaoke, then after the words stopped, they had to get the next lyrics correct.  If they got it correct, the other Team got sprayed with water through the microphones.  If they got it wrong, they got sprayed with water by their microphone.

Each Team stood in glass booths within a huge mock boom-box. In the final round, huge microphones came down from the ceilings of each teams’ booths to spray an excessive amount of water on the players.  The winning team got a metal boombox trophy as their prize, plus money to their chosen charities.

“That’s My Jam UK” will air on the BBC.  Other countries have also picked-up this show including Malaysia, Canada, Spain, Germany, and more.