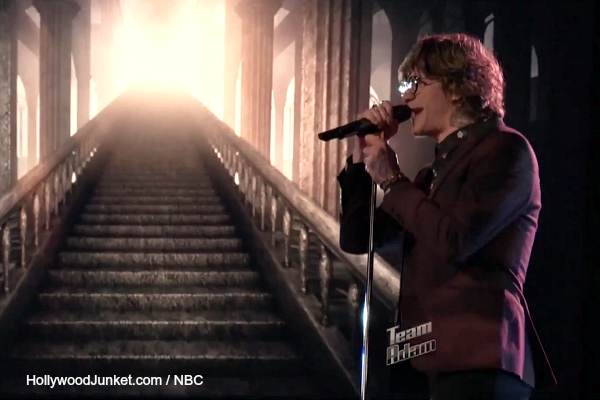 Last week left season 7 “The Voice” coaches – Adam Levine, Blake Shelton, Gwen Stefani, and Pharrell Williams with three members each on their teams, making-up the Top 12. This week, the coaches will lose one more artist per team based on America’s votes from viewers of the show. In the results show this week, viewers will also get the chance to “Instant Save” an artist, then the coaches will save one, leaving us with the Top 10 artists of “The Voice.”

Pharrell said, “as a producer it’s such an incredble moment and can’t wait to see how it turns out.” Blake is already talking Grammys. Before the Top 12 take the stage, the coaches train them more. Blake said they’ve given their artists every tool that they can and now it’s in America’s hands.

From Pharrell’s team, the girl that he save twice – Sugar Jones was up first. Pharrell said Sugar is an amazing soul singer. Sugar said Pharrell is the first one who understands her as an artist. She sang “Take Me to The River”

Coaches Comments: Gwen made a comment that seemed negative at first when she asked Sugar, “Is that a record you’d make today?” Gwen stated that it was old-style, then continued, “it seems ‘right now’ because you made it that way.” Gwen finished by calling her performance “incredible.” Adam said Sugar slowed down and did a little less in the beginning and that the song forced her to be more dynamic. Blake said there’s an edginess to Sugar’s voice. “She takes it to another level” he Blake. Coach Pharrell said she continues to show people “new terrain.”

Gwen said in order for Ryan to make it to the Top 10 Ryan needs to feel what the lyrics are saying. Ryan is singing 1980’s Pop, Rock band Duran Duran’s “Ordinary World.” Gwen told Ryan she saved him because she knows that he has it in him. The coaches comments seemed to agree.

Coaches Comments: Adam told him Rock-and-Roll is the way to go because he just “killed it.” Pharrell said “who knew?” He also said Ryan “has it” and advised him to pick a lane and stay there. Coach Gwen said his audio sounded so good and it was “so perfect” and that he has come such a long way in a short amount of time. She also thanked him for being her friend.

Blake told Jessie that she’s his favorite. Blake said this is her opportunity to show that she deserve to be in the Top 10. Jessie said Blake is the best coach and that he understands her. Jessie sang “Don’t You Worry Child.”

Coaches Comments: Former coach Gwen was impressed about the adding of the piano and said she loved the song and loved it “broken down like that.” Adam reacted “I really liked that a lot.” He advised Jessie to keep exploring the big part of her voice and sensed for her to keep reaching for hitting the big notes. Coach Blake said “this is a person that works maybe harder than any other person on my team.” He said Jessie is “an inventor” and that reminds him of his wife Miranda and said “you can’t teach that.”

Adam gave Damien “He’s My Brother” song to sing. Adam said this song is right on the money for Damien because it’s so emotional. Damien said he loves the Universal message of the song – everyone’s his brother. But, in real-life, he has a lot of brothers and sisters.

Coaches Comments: Pharrell gave Damien a standing ovation. Blake said “congratulations” and great song choice. He said it was solid. Pharrell said “I don’t know who’d be prouder, the church or Donnie Hathaway.” Coach Adam said “I could not in a million years be any more prouder than I am right now.”

DaNica chose alternative record “Creep” by Radio Head to sing. Pharrell said “if you slow the song down, you see more of her colors” and suggested to do it with an Al Green spin.

Coaches Comments: Gwen said “I just love watching you. You’re a freak of nature.” Gwen said it’s shocking and incredible. Adam said “you’re so good that literally anything you sing is going to be amazing…no matter what it is.” Coach Pharrell said when he heard her sing the song, it just moved him and that DaNica did an amazing job.

Taylor is singing a song called “If” by Bread. Gwen said it’s an old song that his generation won’t know. Taylor said the challenge of the song is so simple, and having Gwen as a coach is helping him build a foundation of strength that he didn’t know he had.

Coaches Comments: “The purity of your voice was able to come through tonight and it was the best thing to do at this point,” said Adam. Blake said “The one thing that you can’t do is take Taylor away from what he can do.” Blake also said Taylor has “a dark thing” going on. Pharrell said the vocal brought the tenderness out of the song and when he brought that Taylor thing to it , it’s stoke. Coach Gwen said she finally heard what his voice is when she first heard him sing the song.

Reagan got the ultimate 16th birthday present when America voted for her to stay last week. Blake gave her “It Ain’t Over” by Lenny Kravitz to sing.

Coaches Comments: Pharrell said “I feel you” and it’s always cool to see someone come up with their own vibe in a song. Adam said “I love that song” and happy that someone finally did it and it was totally different.” But, there were a couple of moments that were “breathy”. Coach Blake said he’s so excited to download Reagan’s version of the song and the way she navigates a melody just blows his mind. “You’re so far ahead of your time…you put your own stamp on everything and that’s a big deal in this competition,” Blake commented.

Blake said his mom texts him during the show to see what he thinks of the performances. Host Carson Daly had some fun with “The Voice” viewers by reading their tweets about the messages that they thought Blake’s mother was sending to him via text. One viewer tweeted that “there better be water in that cup.” Another one tweeted for Blake to check if his zipper is up!

Luke talked about how supportive his family has been while he’s been competing on “The Voice”. Pharrell said America will feel something that they haven’t felt before when they hear Luke sing “Thinking Out Loud” by Ed Sheeran. After Luke’s performance, which had a brief delay at the beginning, Carson Daly asked Luke what happened. Luke said he came in two beats too early.

Coaches Comments: Adam came in to the rescue and said Luke recovered like any professional would recover and that it’s a bump in the road and part of it. Gwen said it’s happened to her like 10,000 times. Really? Coach Pharrell said Luke rose to the occasion and give a reason for fans to hashtag “Lukified again!”

Matt said him and Adam Levine are cut from the same cloth and now that Adam knows what his tattoo means, it brought them closer. Matt is singing “Take Me to Church”. “The thing with this song is even a bigger moment because it’s going to be powerful,” said Adam.

Coaches Comments: Standing ovation is what Matt got! Blake said “if this audience (who were shouting) is any indication….it was awesome”. Blake said he couldn’t hear anything. Pharrell said he should be on KROQ (FM radio). Gwen said the song is perfect for him and the kind of song that he would do. Coach Adam said he kept yelling to “turn up the vocal’ because no one could hear. “When you said ‘Amen’ was so beautiful…that’s a guy that wins this show.”

Craig won America’s votes and he said it was humbling. Blake gave Craig a Country song classic “You Look So Good In Love” by George Straight.

Coaches Comments: Former coach Gwen said the lyrics in the song was for her because he looks so good and she doesn’t have him anymore . She said it feels like his show. Adam said “this is exactly what you needed to do. This was a telling moment for you.” Adam said he is super proud. Pharrell said he’s just glad to have someone like him with Southern grass roots and it was “a clean, super professional performance.” Coach Blake said “to have two breaks on the show is unbelievable.” He said Craig shows a different side each time he gets on the stage and it’s a sign of a super-star.

Coaches Comments: Pharrell said that was 100 percent his best performance. Gwen said this is an exciting part of the show because they get to see artist do the songs that they would do. She also said the audience screaming caused her hearing damage. Adam said “yeah you’re cute. You are a talented, talented singer.”

Anita sang “Redemption song” by Bob Marley. Gwen said she wanted to get the sweet spot of Anita’s voice. “It’s about your personality and spirit,” said Gwen. Gwen helped Anita style her outfit for the song as well.

Coaches Comments: Adam said he is so proud of her and that song is one of the most important songs ever written. A song also performed by Blake’s former artist on the show Tessane Chen. Blake said “great job” while sipping-on his water. Gwen said America got to hear Bob Marley’s message through Anita and she’s blessed to be part of it.