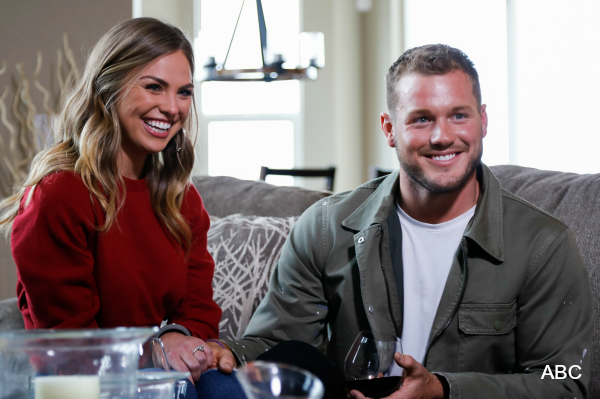 ABC’s “The Bachelor” Colton Underwood and the seven women remaining left Vietnam and headed to Denver in week seven. The women who left last week – Katie, Demi, and Sydney each dumped some disturbing news on Colton upon their exits which warned him of women being there who are NOT ready for proposals. This was a major curve ball for Colton who was still recovering in this week’s episode.

Hannah G. and Cassie were both worried about the rumor that several of the women are not there for the right reasons.

Colton met with Ben Higgins, from “The Bachelor” season 20, before going on any dates this week. Ben forewarned Colton that up to this point is nothing to what’s to come – that is choosing women for the hometowns. Colton told Ben that he’s falling in love with “multiple people.” As for some of the women who may not be ready for marriage, Ben said Colton should be able to weed them out once he gets to know them better.

After the group of women gathered with Colton, he announced that the first date would start instantly. With that, he pulled Tayshia away for the first one-on-one date in Denver.

Colton told Tayshia that when Demi told him there are women not ready, he said he knew that she wasn’t talking about her because he doesn’t see that when he looks at her. When prompted, Tayshia spilled that Caelynn, and Cassie are most likely the two women that Katie and Demi were talking about. She said they’ve talked about being the next Bachelorette and not being ready for marriage.

Colton reacted “this sucks. This is my greatest fear,” and that he now has questions for Cassie and Caelynn. Colton asked how Tayshia’s family would react during a hometown date. She said her dad would have some hesitation because he’s over-protective of her. Colton said he won’t get down on one knee unless he has acceptance from her dad. 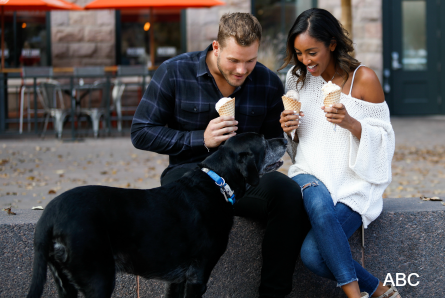 Back at the hotel: The date card arrived which read, “Caelynn, meet me in the Rockies – Colton.” Cassie was the mose upset over Caelynn’s date.

After Tayshia surprised Colton with his last name on her jersey he said he is falling in love with her in his confessional video.

When Tayshia got back to the hotel and told Kirpa that she told Colton about Caelynn and Cassie, Kirpa supported her and said she did the right thing. Kirpa followed-up by stating she’ll also tell Colton the same.

Colton taught Caelynn how to snow surf. In his confessional, Colton said he’ll either go to Caelynn’s hometown, or Caelynn will go home. Then he confronted her after they snow surfed. Caelynn was very upset and told Colton that “it’s a lie” and she’s there to be engaged at the end and is there for Colton. In her confessional, Caelynn said she’s falling in love with Colton.

During dinner with Caelynn, Colton was serious. In his confessional, he said he feels more confused than ever, and it’s been a huge distraction. Colton told Caelynn that he’s trying to process it. Caelynn told Colton that she felt in that moment that he confronted her, like her future with him was being ripped away from her. She told him she’s been herself with him since night one. Caelynn added that she wants to be married to him and have kids. This brought a huge smile to Colton’s face. 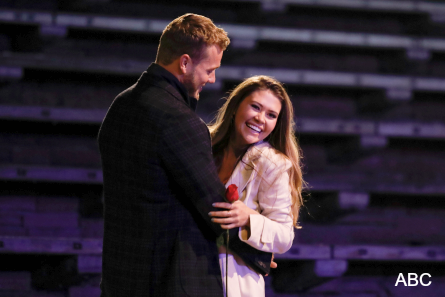 Back at the hotel: The next one-on-one date card arrived which read: “Hannah B. home is where the heart it. – Colton”

When Caelynn told Cassie what Tayshia said about her, Cassie couldn’t believe it and said Caelynn never said any of it. Next, Caelynn confronted Tayshia. Caelynn said she felt betrayed because she thought they were friends. Tayshia said she deducted that it was her and Cassie that Demi and Katie must have been talking about.

Colton took Hannah B. to meet his parents. It was a big deal for Hannah B. She told his family that she wouldn’t have done the show had it not been Colton because she loves what he stands for. Colton’s dad gave him great words of advice which is to trust his own gut feelings and not what other people are telling him. Colton told his dad that Hannah B. told him she’s falling in love with him. But, he’s not there yet.

Colton’s mom told Hannah B. to be open and honest and to wear her heart on her sleeve. His dad told Colton not to second-guess himself. Colton said he has to compare how the women make him feel and that’s where he’s struggling. 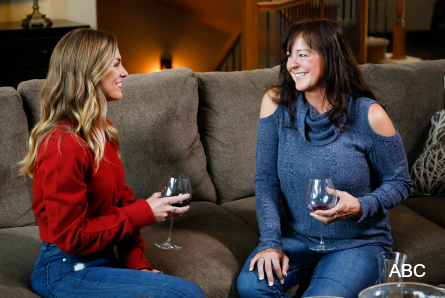 Back to Colton & Hannah B.: During dinner, Colton asked Hannah B. how she knew she was in love with him. She answered with something vague, then stated that she’s still feels that she’s in love with him and wants him to meet her dad. However, Colton said he spent so much time to see who’s ready. But, looked in the mirror and asked if he’s ready. Ready for himself with Hannah B. He told Hannah B. that he can’t meet her father and shake his hand. He told her she’s going to make someone incredibly happy and someone is going to make her very happy. Colton said in his confessional that knowing she’s falling in love with him, and he just can’t get there.

Colton welcomed the women while riding-up on a train. He told Hannah G., Cassie, Kirpa, and Heather that if they are going to introduce him to their family that they are confident where they’re at.

Heather told Colton that it’s not fair to him to take him to her hometown if she doesn’t know where they’re at. She said goodbye to Colton and he put her on the train to leave.

Colton told Cassie that hearing her name brought-up in the topic of not being ready for marriage, “terrified” him. He said it’s his greatest fear. Cassie told Colton that she wouldn’t be there if it wasn’t for him (we heard this before…ahum..Hannah B.). Side Note: We know that none of the women know who’s going to be the next Bachelor until after they’re recruited to be on the show! She then cried and said she doesn’t know why the girls are “bringing that up.” Cassie stated that “there’s no truth to it.” She told him she wouldn’t want to bring him home if this wasn’t real. Colton said his gut is telling him that Cassie would never say that.

Next, Kirpa and Colton sat down and talked. She said she wouldn’t want him to end-up with the wrong person. Kirpa told him Cassie and Caelynn are not ready. Then gave Colton some telling news when she said after Katie left in Vietnam, and he gave that speech, she said the only two women who were in a panic were Cassie and Caelynn.

Colton sat down with the women left , (Cassie, Hannah G., and Kirpa) and said he didn’t know what to do with his “biggest two roses” left. So, he decided to take it into that evening and decide at that point.

At dinner that night, Colton told the women that he had clarity on one thing, and took Hannah G. outside to talk in private (though her giggles were still audible to Cassie and Kirpa in the next room). He the stepped back inside to grab a rose for Hannah G. That left only Cassie and Kirpa to fight over the last rose.

Colton told Kirpa that he appreciates everyting that she’s told him. The two kissed. After that, Caelynn crashed the date to talk to Colton in private. She walked straight past Kirpa and Cassie who were seated at a table in silence. It looked like a scene from a horror film. Silmilar to how a killer shows-up out of nowhere. Caelynn must have been tipped-off by a production assistant to Colton’s whereabouts because she went upstairs and found him instantly to tell him that she’d hate to see him send a girl home that he has a connection with because it’s all lies.

So, Colton ended-up giving the last rose to Cassie. Colton said it’s not about the “he said, she said thing.” It’s about his gut feeling. He said he’s very excited about meeting Cassie’s family because he’s falling in love with her.

Women who left this week: Hannah B., Kirpa, and Heather. 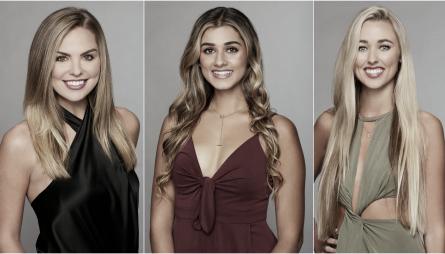 NEXT WEEK: Colton visit’s the four womens’ hometowns. We got a sneak-peek of Tayshia, Caelynn, Hannah G., and Cassie’s hometown dates. It included quick snippet of Colton jumping out of an airplane while screamin like a little girl (just like he did when the snake was on him, and when he bungee jumped). Hannah G. called meeting the family “a make or break ” and that family approval is everything. Colton will get to see how intimidating Tayshia’s dad can be who seems hesitant in giving his blessing. Then, Hannah G.’s dad asks Colton what are his intentions are with his daughter. Colton is terrified enough! Cassie’s dad seems to be having a tough time liking Colton and warns Cassie of possible heart-break. Then the preview end with Colton swating down outside in delima mode stating, “I have all the warning signs and red flags going up right now.”

Women who are bringing Colton to their hometowns next week are: Tayshia, Hannah G., Cassie, and Caelynn. 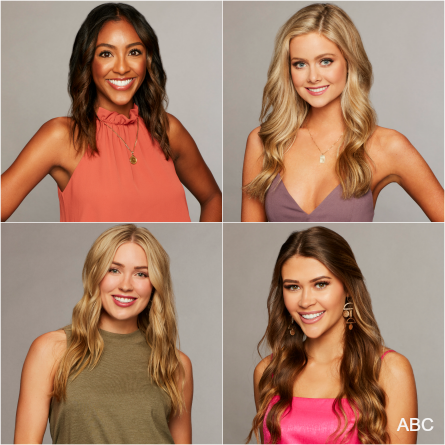 “The Bachelor” airs Mondays at 8 pm PT on ABC network.