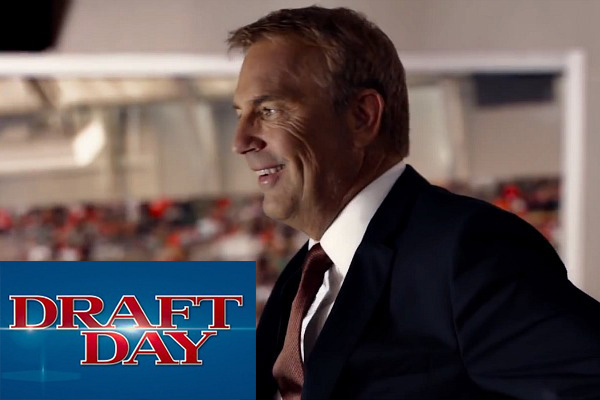 Draft Day. Not just a movie but one of the most anticipated days in any sport. This rings especially true for football where the event is a nationally televised spectacle that takes place over three days on ESPN. No day matters like the 1st where the biggest splashes are made and the pressure is on to turn around franchises in seconds.

This is the situation we find our lead Sonny Weaver Jr. whose played by Kevin Costner. You may have heard of him before. Sonny Weaver Jr. has his back against the wall and his butt in the hot seat. The team he is the General Manager of, The Cleveland Browns, has the 7th pick and they need to turn the franchise around NOW. The team has been terrible for some time and the city as well as everyone inside the franchise has ZERO patience. Sonny Jr. is already disliked because he recently fired his father as the head coach and to make matters worse he passed away not too long after. 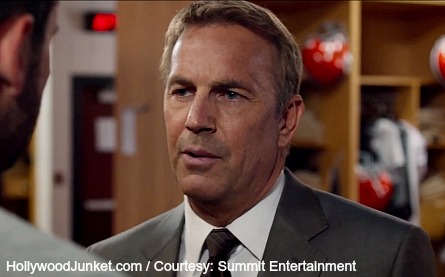 Sonny does have one person on his side during this tumultuous day and it’s his secret girlfriend, Ali (played by Jennifer Garner), that he works with . Even that situation has added pressure to it though as at the beginning of the movie he’s just found out that she’s pregnant and she’s no longer happy being his little secret. Still, she manages to do everything she can to help him throughout the day. Someone who does not help him is the beloved coach Vince Penn played by Dennis Leary who is constantly threatening to quit and unhappy with every decision Sonny seems to be making. Especially the decision Sonny is about to make to get the team a rookie quarterback when the coach already has a great quarterback he loves that just had his best off season ever.

If you haven’t noticed Sonny has a TON of pressure on him throughout this film and it makes for a very intense and fast moving dramady. The film, which was written by Rajiv Joseph and Scott Rothman, makes every minute count and every character is so well intertwined with the main storyline that we never lose focus of what matters. I’m sure the director Ivan Reitman deserves a lot of applause for this as well. 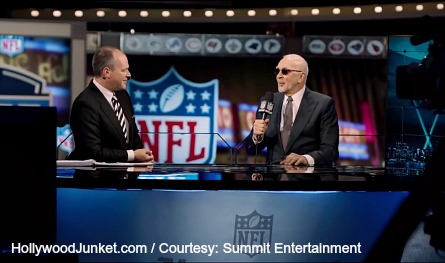 The rest of the cast is sprinkled with veterans and rising stars alike with everyone from Terry Crews, Chadwick Boseman, Frank Langella, Tom Welling, and Ellyn Burstyn playing wonderful small yet important parts. Sean Combs aka Diddy aka Puff Daddy aka I Have A Lot Of Names even makes a convincing appearance as the agent of the top prospect in the draft.

Usually sports films are extremely predictable and have a somewhat corny or cliché ending but this one has numerous plot twists and turns that you never see coming yet they make for a spectacular film. I don’t want to give too much away but I highly recommend you see this movie. I can say that I have NEVER watched an NFL draft yet I enjoyed it so it is not just a film for sports junkies. It’s a film for people who like a movie with high stakes, great drama, and good laughs.

4 Likes – Excellent movie! Something to tweet about.
Written by: Myles Warden