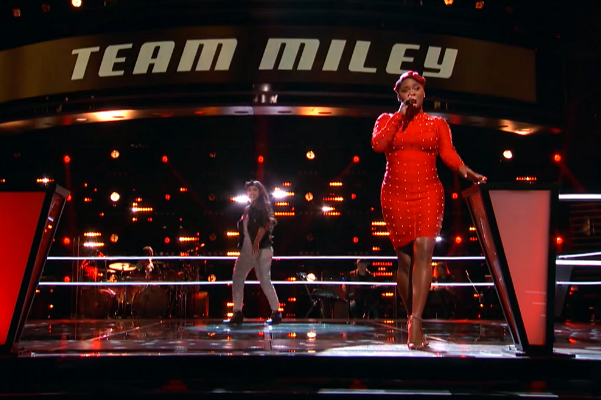 The first week of “The Voice” Battle Rounds was also a first for new-comer coaches Alicia Keys and Miley Cyrus who were nervous about it.

First up was Alicia Keys with her adviser Charlie Puth. Alicia said Charlie “is just beginning his career” which “is an inspiring thing” for her contestants to see.

They sang “Hello” by Adele.

Miley told Christian he has a really unique sound. She loved watching seeing the way Jason moved when he performed. Blake said he got wrapped up in Jason’s delivery and called it “an incredible moment. Adam said the fact that one of them technically has to be available for a steal blows his mind. Alicia was taken by both of the artists. She was proud of Jason and said he makes people want to be like him because he is “so riveting.”

Steal: Adam Levine stole Jason, and said “you’re the first person that I turned around for. It’s rare to have a second chance.”

Listen to Jason’s INTERVIEW Below: 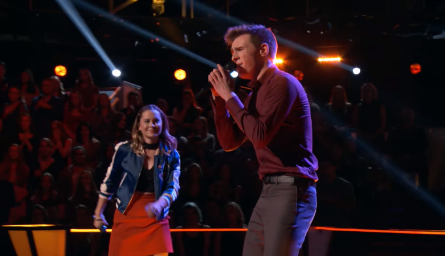 Adam’s first pairing for battle was Natahsa Bure vs. Riley Elmore.
Riley’s been singing for only two years. They sang “Cry Me a River,” a song more suited for Riley’s smooth Frank Sinatra old-school style. Adam said they were “neck and neck” during rehearsals with adviser Sammy Haggar.

After their battle, Blake said “that’s just adorable. But Natasha really “sold it”. Alicia and Miley agreed. However, Alicia chose Riley. Miley said Natasha should feel proud of herself because she’s “really grown.”

Adam was proud of Natasha and “fixed” that nervous thing she had during the Blinds. He told Riley that his voice is so recognizable which is “extremely valuable.” 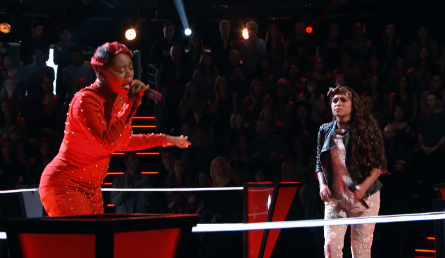 Ali got a four-chair-turn during her Blind Audition. Courtnie is a high school senior whose dad works two jobs to support her music. Their adviser was Joan Jett “The Queen of Rock-n-Roll.” Miley said they’re so different, yet strong which is why she paired them. Miley chose Odetta’s “Hit or Miss” song for them. She said it’s a song that represents Team Miley. Miley was hoping for “the most epic battle in Voice history.”

Adam told Ali that she’s a maniac singer, “unbelievable” and Courtnie was amazing and “stepped-up.” Blake said it’s hard to believe Ali not being around at the end. He compared Courtnie to a “Banty Rooster.” Alicia said she was impressed and they don’t fit into any boxes. Miley didn’t want to let go of either singer.

Battle Winner: Ali Cladwell. “Ali is one of the sickest voices in this competition,” said Miley

Steal: Alicia and Blake both tried to steal Courtnie. Adam pointed out that Alicia was the only other one to turn around for her during the blinds. Courtnie chose Alicia. 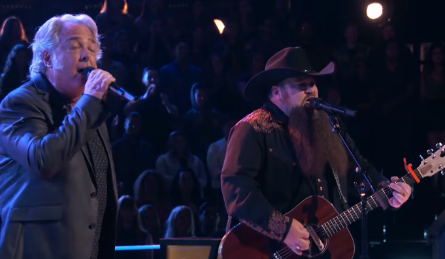 Dan is the oldest ‘Voice competitor this season. Blake had Bette Midler on hand for his adviser. Bette advised Sundance to show some body language and for Dan to use his eyes more by flirting with his eyes. Blake said the two men are incredible vocalists and may be his toughest battle. They sang country song “Feel Like Making Love.”

Alicia said Dan has an original way of delivering music and Sundance has great control of his voice. Miley said Dan used his platform really well and performed really well. She loved Sundance’s “pure” scream. Adam called Sundance the “young hot-shot” and Dan ripped the mic off the stand to show “how the men do it.” Blake said “wow, Dan is a performer” The voice out of Sundance blows the brains out of his head and into the toilet. He picked Sundance as the winner 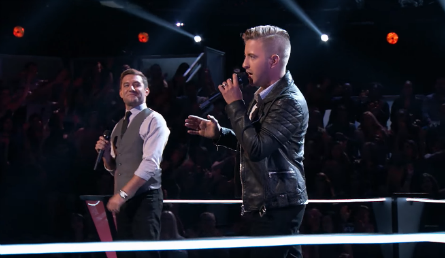 Adam picked “Man in the Mirror” by Michael Jackson. Adam said Billy’s voice is assertive. Sammy Hagar thought Andrew had more of a struggle than Billy.

Blake called it an evenly matched battle and said Adam can’t go wrong. Alicia complimented their uplifting performance. Miley called it such a big song and showed diversity. Coach Adam said their attributes are undeniable. The winner was Billy.

Alicia paired them because they have so much soul. She chose “Maybe” Janice Joplin song. Charlie was blown away at how different We’s speaking voice is from her singing voice. Alicia told them that they are singing “about this moment.” She told them to be great they have to “leave every single thing on the floor.” Alicia stated whoever is able to “internalize” what she feels will be the winner.

Miley said as for going low and high – We did it best. Adam said these women were battling for their lives and said they are super special. Blake said We’ is incredible and hitting the bigger notes, but so is Lauren.

Battle Winner: We’ McDonald. Alicia picked We’ because “she has a real individual voice and that’s gong to take her a long way.”

Steal: Miley and Adam both tried to steal Lauren. Adam promised to bring “that soulful monster” out of Lauren. Lauren chose Miley.

Listen to We’s INTERVIEW Below:

Listen to Lauren’s INTERVIEW Below:

Lane and Sophia sang “Money” song by Pink Floyd. Adviser Joan Jett recommended a “build-up” to a climax in their performance. The two worked together to put personality into their battle. Surprisingly, Sophia was more shy than how she was in her Blind Audition. Miley said it comes down to who does well in the live setting. 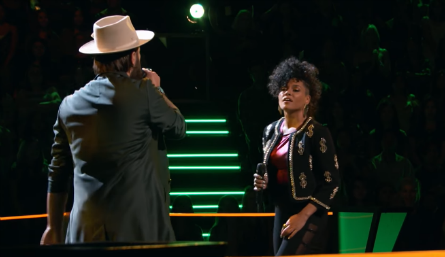 Adam commented on Lane’s tough guy look by saying Lane looks “shady in a cool way. I don’t know if you’re going to sing or rob a bank.” Adam called Lane “bad ass” and “there’s no one like you.” He then told Sophia that she’s a “super-star ass-kicking bad-ass” and thinks she’ll be a “runaway smash on the show” in a week or two. Blake said Sophia is so much prettier than Lane. Lane has a gravily, gritty voice. But, Sophia “started digging-in.” Blake preferred Lane. Alicia called Lane an animal and admired Sophia’s “very powerful, special unique energy”. She chose Sophia. Coach Miley said the beast in Lane came out and Sophia is a professional. Miley said she felt like she wants to “be a guide for” Sophia.

Listen to Sophia’s INTERVIEW Below:

Courtney and Ethan sang a soulful “Gravity” by John Mayer. Blake said Ethan’s voice is jazz and bluesy. Adviser Bette Midler said they are both really talented but it’s as if they’ve never met because they weren’t connecting. She had them perform in rehearsals while holding hands. Ethan responded that it helped them come out of their shells. Blake noticed that Courtney pushed Ethan to perform better, and Blake dreams about having a voice like Courtney’s. 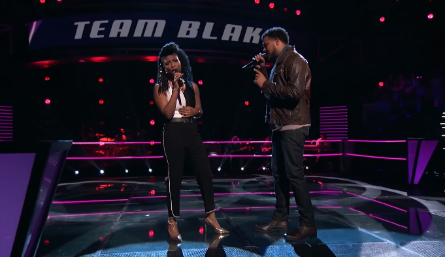 Alicia said “beautiful job” and she liked Ethan’s “undoneness” and ability to stay in his space. She said Courtney showcased “beautiful passion.” Miley said “it was a hard one” for a battle. She wanted Ethan to find more parts to show his tone. She preferred Ethan. Adam said they were “so locked-in to each other” and “great job.” Coach Blake said he regretted putting the two of them together.

Dave and Michael sang “Valerie”. Adviser Charlie Puth commented that you don’t see duos sharing a piano in pop music. Alicia said they need to find a way “to make it flow,” and they’re in a great place. “They are so different, it’s about who defines their style,” Alicia said. 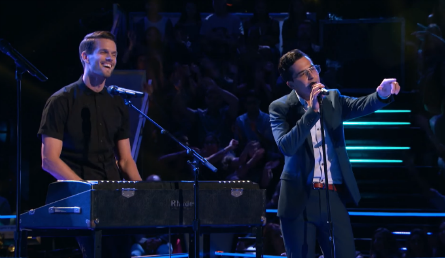 Miley noted that Adam jumped-up earlier to perhaps get ready for a steal. She said she felt that it was a real performance, a show. Adam was still playfully upset at Dave for not choosing him in the Blind Audition. He said Michael was “the big surprise” with his rich and soulful tone. Adam observed that the keyboard switch was “epic”. Blake said he only could remember that Michael looked like Rick Moranis from the Blind Auditions and called their battle his favorite one so far. Both Adam and Blake picked Michael as the winner. Coach Alicia said no one else on the show can pull-off playing multiple instruments like they did. She loved Michael’s “beautiful round voice” and loves Dave’s Smokey Robinson-like falsetto.

Battle Winner: Michael Sanchez. She picked him because “he has a really unique voice” and “looks totally different how he sounds.”

Steal: Adam pushed his button to steal Dave. Adam said he wants to push Dave through all the way to the end and was so sad when he didn’t get him during the Blinds.

Listen to Dave’s INTERVIEW Below:

Other Battles of the night that were not aired in full were: ELIA vs. PONCIANO (Team Adam), CHARITY vs. JOSETTE (Team Miley), KHALIYA vs. MAYE (Team Miley)