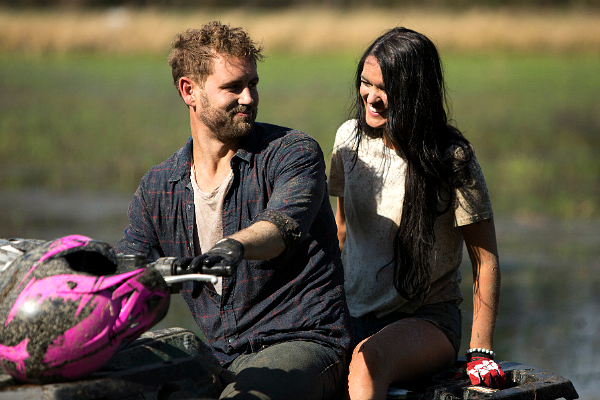 After recovering from sending both Danielle L. and Whitney home the week before and reassuring himself that he can find a wife in the group of ladies left, Nick enjoyed a week on the Island of Bimini in the Bahamas with the group of women.

Last week heavy love interest Corrine was rejected by Nick in the bedroom which left her with a lot of doubt of her likelihood of staying. 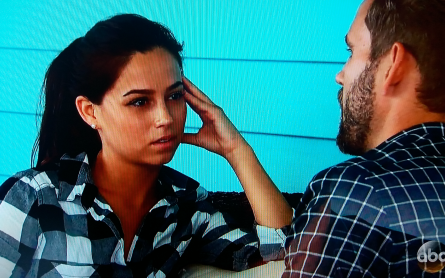 The women who were left – Vanessa, Rachel, Corrine, and Raven, were reacting to the aftermath of Kristina being sent home by Nick before the Rose Ceremony and speculated on what would happen next. Corrine was sure she was going to be the next one going home. Then, Nick returned to talk to them and told them “these roses are mutual. I don’t want to fight myself anywhere” and told them he hoped that they’d accept his roses. He asked each girl one-by-one if they would accept his rose. They each said ‘yes’ as he handed them out. And, THAT was the Rose Ceremony.

Nick visited Raven’s hometown of Hoxie, Arkansas. Raven played a practical joke on Nick by having her brother harass them while wearing his police uniform before they went mudding on ATV’s. Nick was amused and said Raven is both “sexy and smart.” Raven said she’s never dated “an amazing man like Nick” and her feelings for him keep getting stronger and stronger. 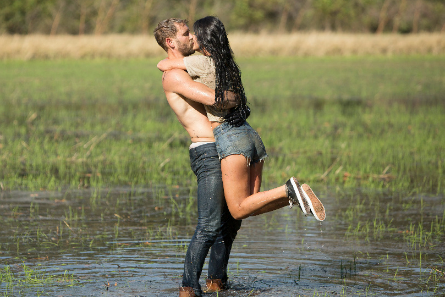 Raven brought Nick to meet her parents and brother. Raven got choked-up after her Dad announced that he had not only survived cancer, but was officially diagnosed as being cancer-free. Raven and her dad had a private conversation about being excited about the possibility of him walking her down the isle on her wedding day.

Nick talked privately to her father and after he congratulated him on his medical news, Nick asked if he was okay with him getting engaged to Raven. Her dad said he didn’t expect to like Nick and then approved. Apparently, Nick is one of Raven’s very few serious relationships and her dad thought Nick is a strong candidate for being her future husband.

Before Nick left, Raven passed on the opportunity to tell Nick that she loves him. She feared being rejected and didn’t want to show weakness.

Nick visited Rachel’s hometown of Dallas, Texas. Rachel got Nick’s first impression rose during the first Cocktail Party of the season. “The most explosive chemistry I have with any of the women” Nick describe his relationship with Rachel. He added that she has the most qualities that he’s looking for in a wife. Rachel first took Nick to her black church to test Nick’s comfort level with it. Nick reacted that although it’s different from his church, he had an amazing time. 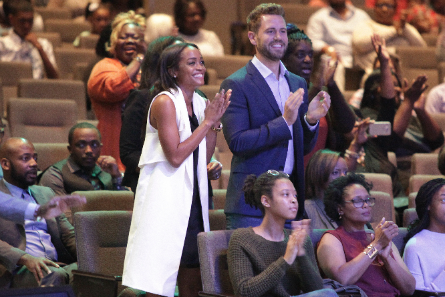 Nick stated in his confessional that he is the most comfortable with himself when he’s with Rachel. In Rachel’s confessional she stated that she feels that Nick gets her and sees her past all the “surface level stuff.” She also said if her family gives their approval, then that’s the “push” she needs to fall in love with him.

Nick met Rachel’s mom and a big group of family members that included a cousin, sisters, in-laws and their kids. He enjoyed a traditional Southern meal that consisted of okra. After dinner, Rachel’s sister Constance and her white husband questioned how comfortable he is dating a black woman. Then, he got the same line of questioning from Rachel’s mom. Unfortunately, due to work obligations, Rachel’s father was not present during Nick’s visit.

The kicker question that Rachel’s mom asked if Nick had seen any “red flags” with Rachel. Nick answered that he loves Rachel’s “big personality” the most. During Rachel’s conversation with her mom, she revealed that Nick reminds her of Rachel’s dad. Rachel was pleasantly surprised by the statement.

Nick met-up with Corrine in her hometown of Miami. Corrine wanted Nick to experience what it’s like to spend a day in her life which was upscale shopping. Nick was surprised at Corrine’s level of shopping and the fact that store associates know her as soon as she walks in the door. 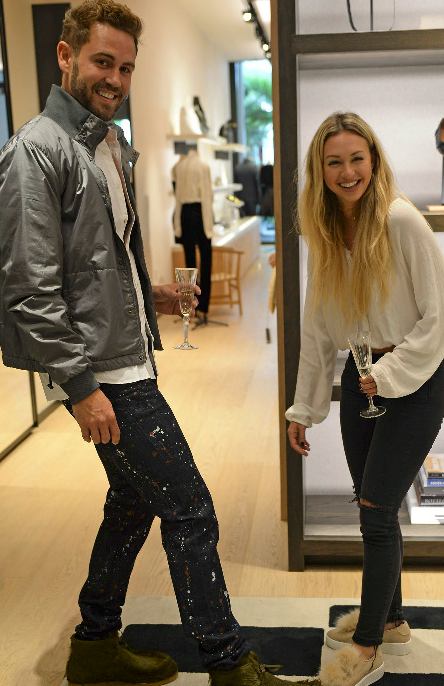 During lunch, Corrine revealed to Nick that she was “really, really falling” for him then told him that she loves him. She thought he had a “look in his eyes” (which he indeed did) that said he possibly loved her back.

After that, the two were off to meet Corrine’s huge Greek family brood along with Nanny Raquel. Corrine’s mom said Raquel has been with the family for 17 years and is like a second Mom.

Corrine’s dad was shocked when she told him that she told Nick she loves him after only six weeks of dating! She told her dad that Nick sees things in her that others don’t. While Corrine talked to her dad, Nick talked to Raquel. She told Nick that if Corrine is happy, she’s happy. But, Nick didn’t answer her question about there being any kids in their future.

Corrine’s dad was worried if Nick is capable of making enough money to raise a family AND keep Corrine happy. Corrine was confident that Nick would be capable. Then, Dad raised the question with Nick himself. He left it at if Corrine is happy, he’s happy. After that, Mom was next. Again, a lot of “happy” going around and Corrine told her mom that she loves Nick. Dad said if Nick can say he could be happy for the rest of his life with Corrine and Corrine can be equally as happy, he gave his blessing to the duo.

Corrine felt that Nick is “a great match” for her and was so happy by the end of their hometown date. She stated that she’s in love with Nick.

After arriving to Vanessa’s hometown of Montreal, Canada, she took Nick to meet
her student’s who wrote a letter to Nick when they found out that Vanessa was going to be on the “The Bachelor”. Nick got emotional while meeting these special needs students. 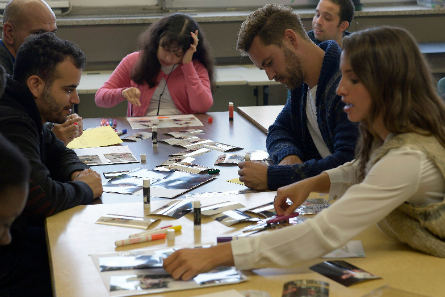 After Nick got approval from Vanessa’s students, he would meet her parents separately, since they are divorced. First-up, he met Vanessa’s mother along with sisters, brothers and extended family. Nick found the meeting of her Mother and sister were “intense”. Her brother was majorly concerned about Vanessa getting heart-broken again and admitted to be scared of it happening again. Apparently, she went through a very bad break-up previously.

Nick ran into some difficulties after meeting Vanessa’s father who did not give his blessing to Nick, especially after finding out that Nick asked for the blessings from three other group of parents.

By the end of their conversation, dad gave his blessing after stating that he doesn’t want Vanessa to get hurt and only wants her to be happy. Vanessa was visibly disappointed after her Dad told her that Nick indeed asked all of the parents for their blessings and was left questioning if her judgement about Nick was off.

The four women traveled to New York to meet Nick for the Rose Ceremony. Nick said it felt impossible to make a decision on who to send home. Then, Andi Dorfman who was the first Bachelorette Nick competed for, knocked on his door. Probably to give him some advice.