Clayton’s No Tears, No Regrets on THE BACHELOR 26: THE WOMEN TELL ALL Recap! 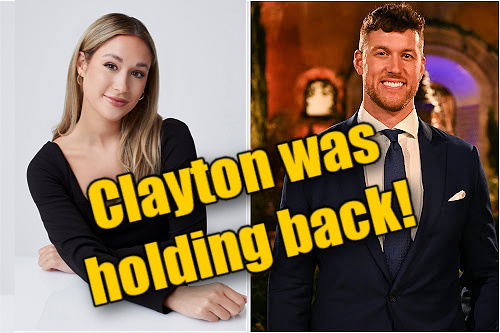 “I don’t want to hold back anymore.  I want to allow myself to fall in love.”  – Clayton Echard.

“The Bachelor” Clayton Echard had hometown dates this week with the four women who were left.  They were: Serene, Susie, Rachel, and Gabby.  Clayton was exicted to see the women again and to not be planning the dates for a change.  Susie, Gabby, Rachel and Serene showed Clayton some fun parts to their hometowns, then later introduced him to their families and friends.  Later, Clayton had some relvealing news to share with host Jesse Palmer just before the Rose Ceremony. 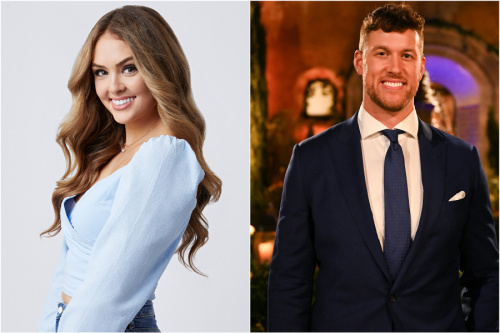 Clayton met Susie in her hometown in Virginia.  Before meeting Susie’s parents, she took him to do jiu jitsu with her.

Susie said when her Dad got sick, one of the most heart-breaking things for her was thinking aboutif her dad were to not be around to walk her down the aisle, and she wants him to be there for that.  Susie also said that her Dad sets a high standard to what a man should be.  Susie told Clayton that bringing him there to meet her parents is really a big deal.  Clayton reacted that he really wants to meet her father even more now.

Clayton met Susie’s parents, sister and best friend.  Clayton caught everyone up with their adventures of his and Susie’s dating so far.  Then, Susie’s dad pulled her for a private “chat.”  The good news was that Susie’s dad was recovering well.  Susie said her relationship with Clayton doesn’t feel like anything she’s had before.

Her dad spoke to Clayton in private.  He told him that “she’s special,” and all he has to do is “reel her in.” Dad said Susie sets examples for him and his wife all the time.  He also added that he could sense that there was something special with Clayton and Susie as soon as they walked in together.  Dad said Clayton has his blessing because he trusts Susie’s judgement.

Then Clayton spoke to Mom who said as long as he’s “loyal” Susie will be there.  Clayton told mom that looking at Susie, “there’s no question that I can get there” with her.  Susie told her mom that she thinks she could marry Claytong.  But, it’s scary because Clayton is someone who can break her heart.    Mom warned Susie to “proceed with caution” because he told her that he’s not in love with Susie yet. 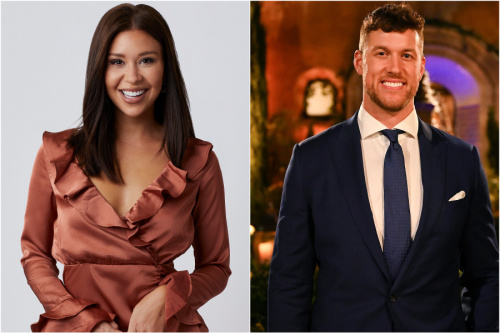 Clayton said “it’s so easy” with Gabby who’s been opening-up to him a lot.  She took Clayton to “proposal rock” in the woods where they spent some time.  Gabby’s one-on-one date with Clayton was a while ago.  She said spending this time with him feels like no time had passed.  The two then got into a hot tub in the woods.

Clayton would be meeting her uncle, aunt, cousins and her grandpa.  Her Dad wasn’t able to be there because he’s battling cancer.  She said because of Covid was another reason he couldn’t make it.  In her confessional, Gabby said she wished she could get her dad’s feedback because he’s the person she turns to the most.

The first thing that grandpa said to Clayton was “good luck.”  Clayton had Gabby tell them all about her introduction to Clayton when she brought a pillow with a picture of Clayton’s face on it and she told him she wanted to sit on his face.

Clayton and grandpa talked in private.  Grandpa told him “she’s a good kid.  You better be good to her.” He advised them not to “run in it.” He also said “so far, I like what I see.”  But, he might change his mind about Clayton, he warned him.   Gabby’s Aunt asked Gabby if she had told him that she loves him?  She answered “no” and she wanted to see Clayton with them first.   Her Aunt said if Gabby tells him she’s falling in love, it might lead to a great future together.

Then Grandpa joked that he thought that Clayton is “full fo Sh@**.”  But, to make sure whoever she chooses, that it’s for life.  He told her that “every marriage has problems.”  But, both people involved have to learn to be flexible and forgiving.  Gabby said in her confessional that she is falling in love with Clayton.  But, she’s really torn and wished that her Dad was there.

Gabby got a surprise visit from her dad who gave his blessing to her and Clayton.  He had to communicate with Gabby via flashcards from a distance, then he left.  Grandpa said he thinks Clayton and Gabby’s dad would get along.  After Gabby and Clayton stepped outside for alone time, Gabby told Clayton that she’s falling in love with him.  Clayton was really happy to hear it. 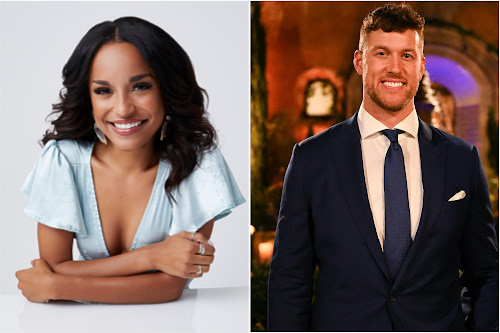 Oklahoma City was the next stop for Clayton who was meeting Serene.  It was the city where Seren grew-up.  She asked Clayton right away if he was afraid of heights, then pointed above them.  It was an obstacle course that started with them walking across a high tight rope.  Clayton was really terrified.  After he got across, they both ended the obstacle course with a leap down 84 feet on a bungee chord.  Clayton freaked-out before taking that leap.  Serene was more calm, cool and collected, then freaked out a little once she landed on the ground.

Clayton would be meeting Serene’s Mom, brother, best friend.  Serene’s dad was not able to be there.  Her parents divorced when Serene was two years old.  She said she’s more cautious of people meeting her family.   Serene said she feels comfortable with Clayton which is really strange for her and she doesn’t let people meet her family unless she feels comfortable with them.

Serene’s brother pulled Clayton to talk in private.  He told Clayton that he has to base if off of her body language more than what she is saying.   Her brother was surprised that Serene had told Clayton about her cousin and grandmother passing because Serene doesn’t talk about that stuff.  He then asked Clayton, “do you love her?”  Clayton responded, “I’m not there yet” and he hasn’t told anyone that he’s in love.

Serene told her mom that she told Clayton that she’s in love with him.  Her mom, Sherri,  was very surprised that Serene got there so fast.  Serene then spoke to her brother.  He said this is “so fast” and it scares him because he doesn’t want to see her get hurt.  “I’ve seen you trust people before.”  He told her to be careful, and he trusts her.  Serene said she’s never seen her brother get emotional.  Both her mom and brother said they’ve never seen Serene be so open about her feelings.

Serene told Clayton, “I’m not falling in love with you.  I am IN love with you.”  Clayton was smiling after she said that.  He said “it’s so many feelings,  it’s so good.”

Rachel greeted Clayton with a lot of kisses after jumping into his arms.   Rachel met Clayton out in the woods by a lake where she warned him there were alligators and bears.  They got into a canu and there in fact were alligators and a huge spider.  Rachel took Clayton to “the kissing tree.”   In her confessional, Rachel said she can see Clayton being her husband and she’s falling in love with him.

Clayton would be meeting Rachel’s parents and her best friend Nate.  She warned Clayton that her dad “is very blunt” and tough.  She then told Clayton that she is falling in love with him.

When Rachel introduced Clayton to her family, her sister said she’s never seen Rachel so glowing and happy before.  Rachel’s Dad, Tony, started tearing-up.  Her best friend Nate, said the same and grabbed her for a private talk.  He asked her how she felels about Fantasy Suites, “you don’t want to be played.”  He added, two months from now, who’s going to be here to pick up the pieces.

Her sister talked to Clayton.  She said if Rachel gets her heart broken, it’s going to be tough.  “I don’t ever want to see her get like that again.  She’s going to lose her trust in people again.”

Her dad Tony sat down to talk to Clayton in private.   Tony asked Clayton if Rachel’s work has her going to Europe for one year, what does that mean for their relationship?  Clayton said he loves that Rachel is independent and he’ll go wherever she goes.

Tony said watching Clayton’s interaction, it seems that Rachel is the only one, but that’s not the case.  “If Rachel isn’t the one, what are you going to do to not hurt her?”  Clayton said he sees a future with Rachel, and if he didn’t he wouldn’t be sitting there with him.  Tony said he couldn’t give Clayton his blessing until after he talked to Rachel.  “If she gives me a good word, I’ll pat you on the arm,” he told Clayton for validation.

Clayton said in his confessional that it was disappointing to not get Tony’s approval.  Rachel told her dad that she is falling in love with Clayton.  Tony said he thought that Clayton was very nice.  Tony said he’s afraid of her getting hurt, and if Clayton is what she wants, he’s all for it.  Tony said he’s never seen Rachel so happy and didn’t want to be a Debbie downer.

Tony patted Clayton on his arm when he was saying goodbye.  After they left, Rachel told Clayton that she feels even stronger for Clayton.  “You mean so much to me,” Rachel told him, and that she’s falling even harder for him now.  Clayton said meeting everyone meant so much to him.  Clayton didn’t feel good knowing that he would have to say goodbye to three women at the end of this.  He wished the feelings weren’t as strong so “it would be easier to cut ties.”

Back at the mansion:  The women were heading to the Rose Ceremony.  Susie said she was genuinely worried because she has a strong connection.  But, she was reflecting on what Clayton told her mom.  That he wasn’t in love with Susie.  Rachel said the thought of not being the one at the end terrifies her.

Clayton spoke to host Jesse Palmer before the Rose Ceremony.  He revealed to Jesse that he was protecting himself earlier.  But, now, he’s falling in love with all four women.  “I don’t want to hold back anymore.  I want to allow myself to fall in love.”  He said he wants to give his all because they have given their all.  Clayton said as time goes on, there’s a chance that they start putting up walls, and he doesn’t want that to happen.

Clayton told the women that it comes down to following his heart and “it’s the toughest decision I’ve made at this point.” 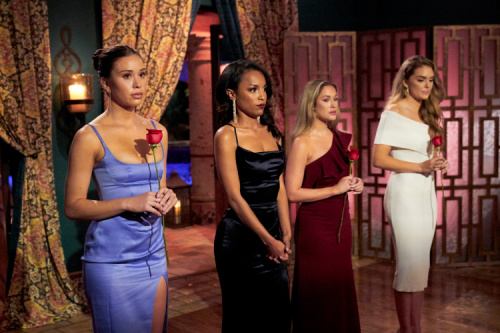 That meant that Serene went home.  Serene asked Clayton what it was?  Because he had told her that he had no reservations.  Clayton answered that he had to reflect and asked himself where he stood with his heart.  He said he had stronger connections.

NEXT WEEK:  It’s a two night event!  On Monday’s episode, it’s the overnight dates.  IT changes everything “forever.”  The next day, Cayton tells two women that he was intimate with both of them.  On Tuesday’s episode, it’s “The Women Tell All” and the show gave hints that there will be a lot of drama with Shanae.