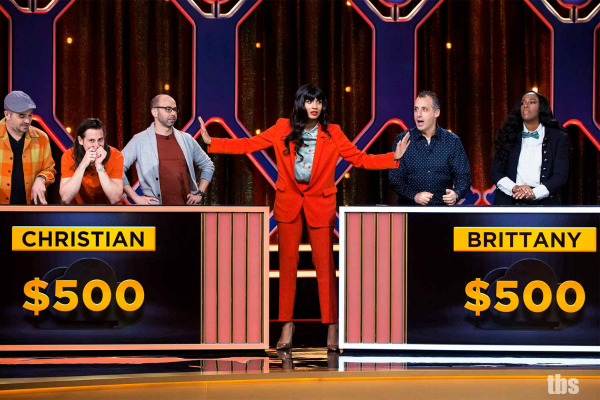 TBS’s semi-raunchy, semi-educational, and a lot of pop-cultural and  tabloid gossipy game show “The Misery Index” makes it fun to take jabs at others peoples’ misfortunes while betting money on them.  And if they guess close enough they win money!

In line with the betting spirit of “The Misery Index,” the stage reflects that in it’s resemblance to a Las Vegas-like casino vibe in the set design’s look and feel. It looks like penny machines are about to pop-up any second.

The show sets-up the scene of a series of unfortunate events most of which have actually happened in real-life and have been reported by either a news outlet, a tabloid, or an online video.  The show features two contestants per half-hour show who stand-off during three rounds.  The fourth round is the Final Round played by the winning contestant of round 3.  Each round gives each contestant a separate scenario that they must rate, based on the findings of the show’s psychiatrists where the incident rates on the “Misery Index.”

Hosted by “The Good Place” actress Jameela Jamil, and co-hosted by comedy troupe The Tenderloins from truTV’s “Impractical Jokers” – Brian “Q” Quinn, James “Murr” Murray, Joe Gatto, and Sal Vulcano who add comedy relief by joining the contestants to help them figure-out what to rate each unlucky event that is presented to them.

In round one, called “Misery Lane,” contestants are given one horrendous event  that they must place among two other horrible events on the Misery Index rated from 0 – 100.  If the contestant answers within the correct range, they win $500 in that round.  The contestants are given only one chance per round to bank money.  In round two, “More or Less Miserable,”  contestants have the opportunity to win $1000 after being shown two deeply traumatic events then must determine which one is worse.  Round three is called “Master of Misery” where the two contestants are shown one miserable event and they must rate where it lands on the Misery scale.  Whoever gets the closest, wins $2000.  If they guess the number head-on, the money is doubled, and they win $4000.  The contestant who guesses the closet without going over, moves-on to the final round where they play for $30,000.  The defeated contestant goes home, most likely, without the money they banked.

The final round is called “Margin of Misery.”  The contestant is shown three terrible events worth $5000, $10,000, and $15,000.  If they get all three correct, they win $30,000.  After being shown each event, the contestant must place the range finder where they think it falls on the Misery Index.

Throughout the show, the traumatic stories are not in any order of gross to grossest.  So, the first one might rate higher on the index than the last one. The contestants chosen to play, also have their own miserable events announced at the top of each show with their introductions.  Some examples are one contestant accidentally pooped her pants, and another contestant had a date with a married woman who’s husband walked in on them.

Each episode emphasizes the content of the show with titles such as: “So That’s Murder Then?”; and “Check out this Sucker!” are two examples which also serve as lead-ins to what’s to come.

How the show rates the level of miserableness is according to their “experts,” a panel of psychiatrists,” the stories are based on three pillars of misery – physical pain, emotional trauma, and long-term psychological impact.  The contestants’ game play is to decide how to rate those events on the Misery Index for a chance to win $30,000.

Examples of two miserable events that the contestants had to rate in round one called “Misery Lane” is – you find your Grandpa’s journal and discover he was a Nazi which is rated at a 43 on the Misery Index of 0 to 100.  The second event is, you are mistakenly deported  which is rated at an 81.  The contestants are then given events to rate either higher, lower or in between the example events on the Misery Index.

Videos and articles are displayed on what the show calls the “Trauma Tron” to provide visuals.  Surprisingly, the videos shown with actual people are not blurred-out, which means that the show had to get their consent as well as most likely pay a monetary compensation for their likeliness.   Another example of actual events given to contestants were in round 2, “More or Less Miserable.” Scenario one was, you almost get carjacked by a naked man, or scenario two, you walk by a friendly masturbater in public.   The contestant has to guess which even rates higher on the Misery Index.

In round three, the winner of this round “takes all” which leads us to believe that the losing contestant does NOT get to keep whatever they banked up to, and including that round.  In one episode, contestants are shown a video on the “Trauma Tron” of a man who lost a bet and had to suck the toe of a stranger on the boardwalk.  Contestants must rate where this event lands on the index.  They have to lock-in a number and whichever contestant gets closest without going over, goes on to the final round.

In the final round “Margin of Misery” the contestant has to place a range of numbers on the Misery Index of where they think it belongs.  For example, they had to place where they thought opening a can of Red Bull with a dead rat inside (yep, and there’s video) would rate on the Misery Index.  They got a range of 30 points.  So, as long as they were within the range of thirty numbers on the scale of the correct answer, they banked the first amount of $5,000, moving on to the next round of $10,000, then finally, $15,000.

The host revealed an embarrassing story of her own during one episode where she said she peed her pants “a little bit” during a show because her co-host was so funny.  Jamil said she had to use a hair-dryer to dry the spot during the break.

As for the panel of “experts” behind-the-scenes to “The Misery Index”, there’s no mention of who they are, what their exact credentials are and how they base their findings.  It’s also unclear as to when contestants are given hypothetical or real events, if the psychiatrists based their findings on the exact same events.

It’s a fun show, with a later airtime of 10 pm which warrants the raunchiness of the show in regards to content and language.  “The Misery Index” is entertaining enough where it’s potential for success most likely will be due to showing its viewers other people’s problems are worse than their own.  A recipe proving to work for shows like “Dr. Phil” and, now cancelled after 27 years, “the Jerry Springer Show.”  On another note, the first two episodes seemed to have the most horrific events, then fizzled-out over later episodes.  We aren’t sure if that was really the case, or if we became desensitized to it all after each episode.

Viewers will be able to check-out “The Misery Index” game show, inspired by card game “Sh*t Happens” when it premieres on TBS Tuesday, October 22nd at 10 pm ET/PT.