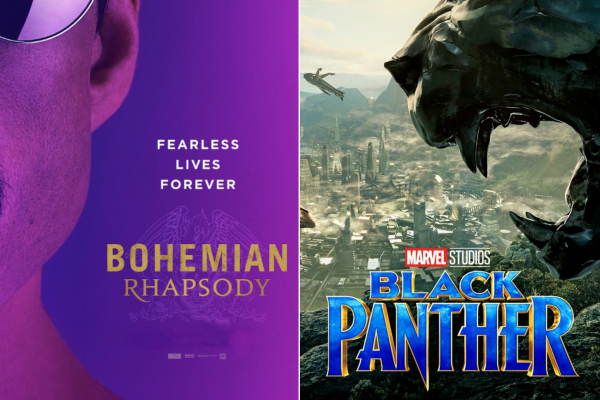 The 91st Academy Awards took full advantage of having a rock movie in the Best Picture category, “Bohemian Rhaopsody” by opening the show with a Queen performance with original members and Adam Lambert singing as lead vocal. Lambert also headlines the Queen tribute band. Other musical performances of the night included Jennifer Hudson, Bradley Cooper with Lady Gaga.

The controversal hostless ceremony this year was curated by a number of celebrities from all genres of entertainment from pop super-star artist Jennifer Lopez to mega tennis pro athlete Serena Williams. Comedians Tina Fey, Amy Poehler, and Maya Rudolph were the first slew to come out onto the stage to present the first award of the night. 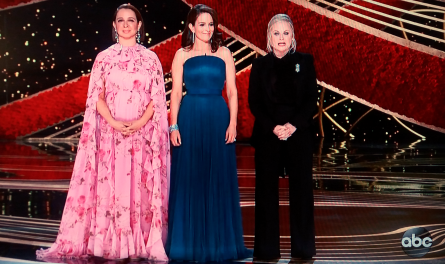 At a hostless ceremony, it seemed that the Academy was hinting of an unconventional night with many wins going to movies such as Marvel’s comicbook movie “Black Panther”, and rock-n-roll movie “Bohemian Raphsody.” With that, many milestones and firsts were had by the creators and craftsmen teams of these films. Conventional wins went to moives such as “Roma”, “Vice”, “The Green Book.” The format was a fresh welcome with less distractions from a host trying their best to please the Academy and A-list audience members. Yet, even without a host the Oscars ceremony telecast still somehow went on for four hours. 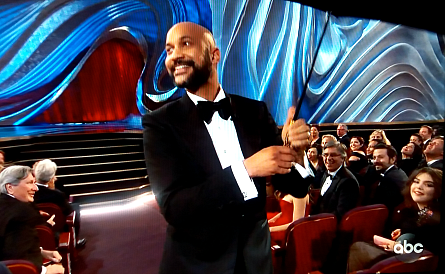 Creative ways were used to introduce nominees for Best Picture. That included when Keegan-Michael Key descended from the Dolby Theatre ceiling via umbrella to announce nominated film “Mary Poppins Returns.” 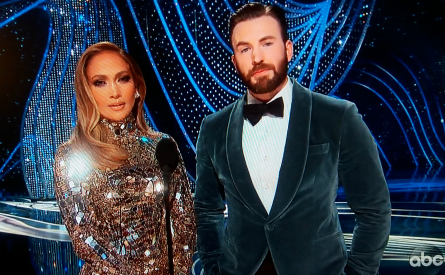 The first Oscar win of the night went to actress Regina King who won for Best Actress in a supporting role in “If Beale Street Could Talk.” In her acceptance speech she thanked her mother for teaching her that “God is leaning in my direction” with tears in her eyes. The camera panned to a shot of her mom in the audience who was also crying. 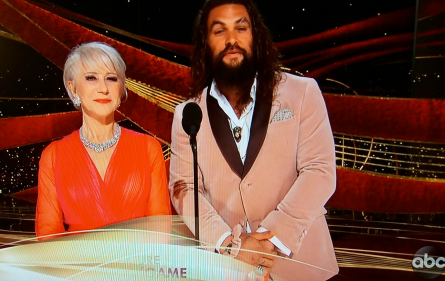 Makeup and Hairstyling went to “Vice” movie. Next, was Costume Design “Black Panther” movie got the most cheers when presnters Melissa McCarthy and Brian Tyree Henry who doned their own extravagant Victorian costumes announced it. McCarthy was nominated for Best Supporting Actress this year. The win in fact went to “Black Panther” movie. Costume designer Ruth Carter called her mom the “orginal super hero” and thanked her. Carter was previously nominated for the Academy Award for Best Costume Design for her work in “Amistad” and “Malcolm X.” 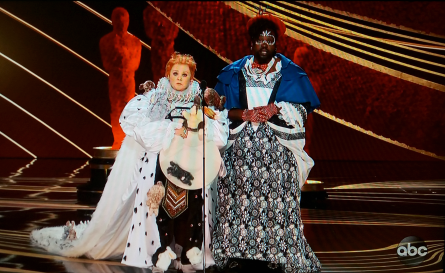 The Academy’s Best Production Design went to Marvel’s “Black Panther” Hannah Beachler. She thanked director Ryan Coogler who makes her “a better person” and gave her a better prespective of life.” She also thanked Marvel, stating that they “gave me the opprotunity to do my best.” At the end of her speech, she thanked the advice she got from a woman, “I did my best, and my best is good enough.”

It was a third Oscar win and 10th nomination for cinematographer Alfonso Cuarón’ who won this year’s Oscar for Best Cinematography for “Roma.”

Sound Editing went to John Warhurst and Nina Hartstone for “Bohemian Rhapsody”, beating-out First Man, A Quiet Place, Roma, Black Panther. Warhurst said it was a “great day job” to be working with Queen. Next, the Sound Mixing Oscar went to Paul Massey, Tim Cavagin and John Casali also for “Bohemian Rhapsody,” a first win for this group of sound mixers.

The most anticipated performance of the night “Shallow” performed by Lady Gaga and Bradley Cooper did not disappoint. 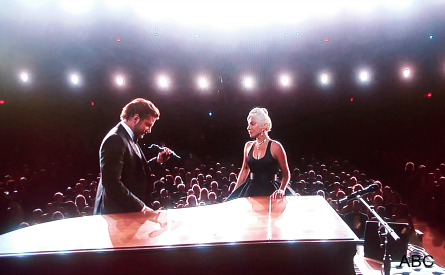 “Roma” Netflix film won Best Foreign Language Film. Alfonso Cuarón’ accepted the honor for “Roma” and explained that the American films that inspired him were Citizen Kane, Jaws, The Godfather. “We are part of the same ocean,” he stated and thanked Mexico and the beach where the film comes from.

Actor in a Supporting Role – Mahershala Ali for “Green Book”, who won in this same category for “Moonlight” in 2016. Ali thanked his mom who taught him he could do anything that he puts him mind to.

Animated Feature Film – “Spider-Man: Into the Spider-Verse” was a first win for the team consisting of Bob Persichetti, Peter Ramsey, Rodney Rothman, Phil Lord, and Christopher Miller. One thanked their families who experienced the four-year ride of the team making the animated feature. 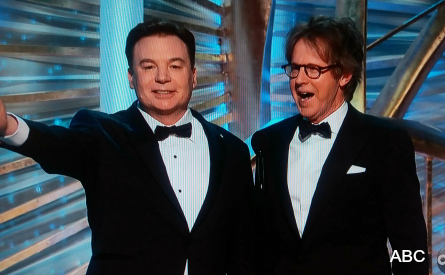 Best Documentary Short Subject – “Period End of Sentence”. It was a first nomination for the team Rayka Zehtabchi, and Melissa Berton. One of them stated in their acceptance speech, “I can’t believe a film about menstration just won an Oscar!” She said “a period should end a sentence, not a girl’s education.”

Barbra Streisand presented Best Picture nomination film “BlacKkKlansman.” She stated the “truth is especially important these days.” Streisand joked that her and director Spike Lee both love hats and called “BlackkKlansman” game-changing and his “masterpiece.”

Best Live Action Short Film – “Skin” won by Guy Nattiv, who stated he moved to America from Israel five years ago, and Jaime Ray Newman. Jaime said she’s a parent and hopes her child won’t have to live in a world where “these things happen,” referencing “Skin” movie.

Best Adapted Screenplay – “BlackKlansman” won by Charlie Wachtel & David Rabinowitz and Kevin Willmott & Spike Lee. It was Lee’s first win and fifth nomination. He thanked the relative that put him through NYU film school, and inserted numerous political messages within his speech….”the presidential election is around the corner.” The award was presented by Brie Larson and Lee’s longtime friend Samuel L. Jackson whom Lee jumped-up on upon collecting his Oscar award! 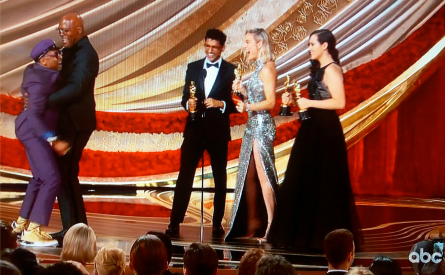 Best Original Song – “Shallow” for “A Star is Born.” Lady Gaga accepted and stated “It’s not about winning. It’s about not giving up.” She finished her speech by saying “It’s about how many times you stand-up and be brave.” 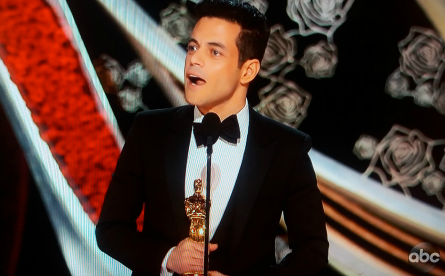 Best Actor in a Leading Role – Rami Malek for “Bohemian Rhapsody.” Malek stated in his acceptance speech “I may NOT have been the obvious choice. But, I guess it worked out!” He also added that they made this movie about a gay immigrant man that lived his life unapoligetically. “We are longing for more stories like this.”

Best Actress in a Leading Role – Olivia Colman for “The Favourite.” Colman gave what was the most heart-felt and comical speech of the night. She beat-out other leading ladies nominated – Glenn Close, Lady Gaga, Yalitza Aparicio, Melissa McCarthy. Colman finished-up by thanking Lady Gaga! Laughter followed.

"It's genuinely quite stressful!" Olivia Colman wins Best Actress in a Leading Role #TheFavourite #Oscars #Oscars2019 and "this is not going to happen again!" Lol! @TheAcademy pic.twitter.com/CnzKqk8hyu

Nomination for Best Picture, introduced “Green Book”. The presenter stated it’s “a portrait of the time in history that is very real and seared in my memory.”

Best Director – Alfonso Cuaron for “Roma” who made his third trip to the stage this night. He acknowledged the fact with, “being here doesn’t get old.” Cuaron also stated in his acceptance speech, it’s the job of artists “to look where others don’t. It’s more intense when we are forced to look away.” 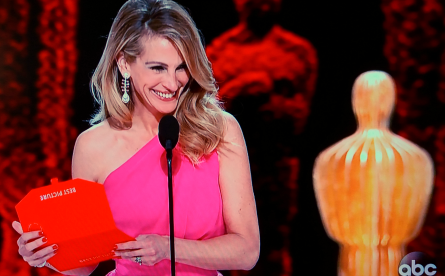 Best Picture – “Green Book”. The movie had five Academy nominations and three wins this year. In the acceptance speech, “this whole movie is about love and loving each other.” He stated all these awards are because of Viggo Mortensen. He also thanked Steven Spielberg and Octavia Spencer, among many others for their help in making “Green Book.”